A Queer History of Fashion: From the Closet to the Catwalk 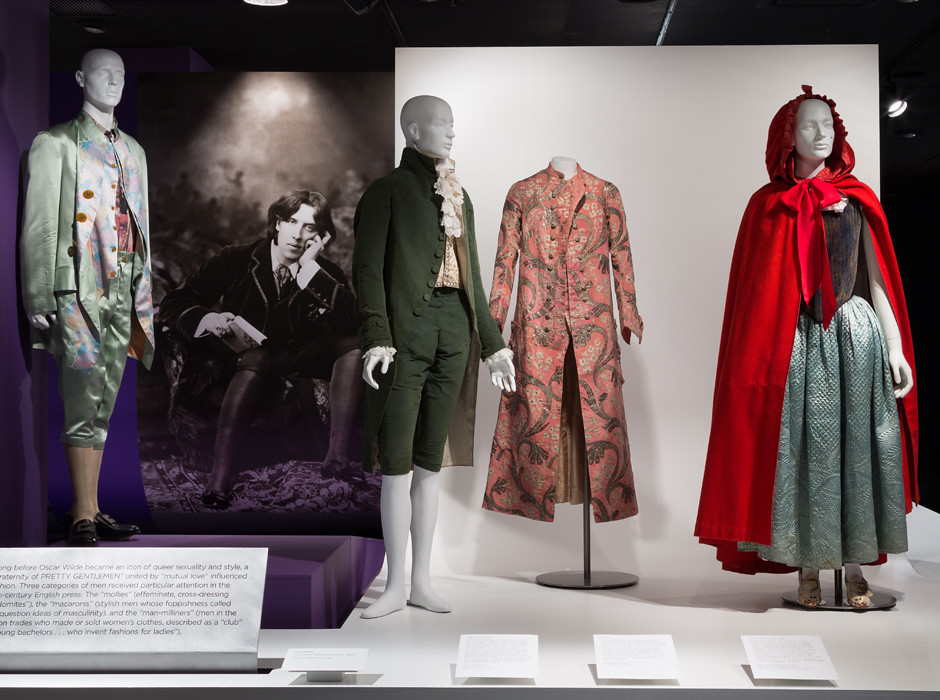 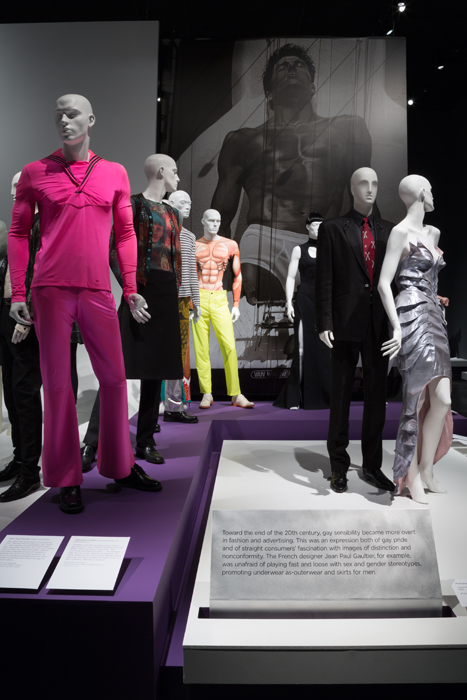 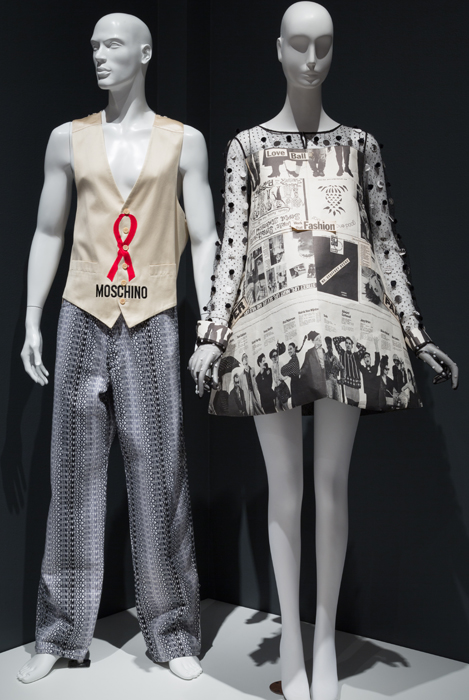 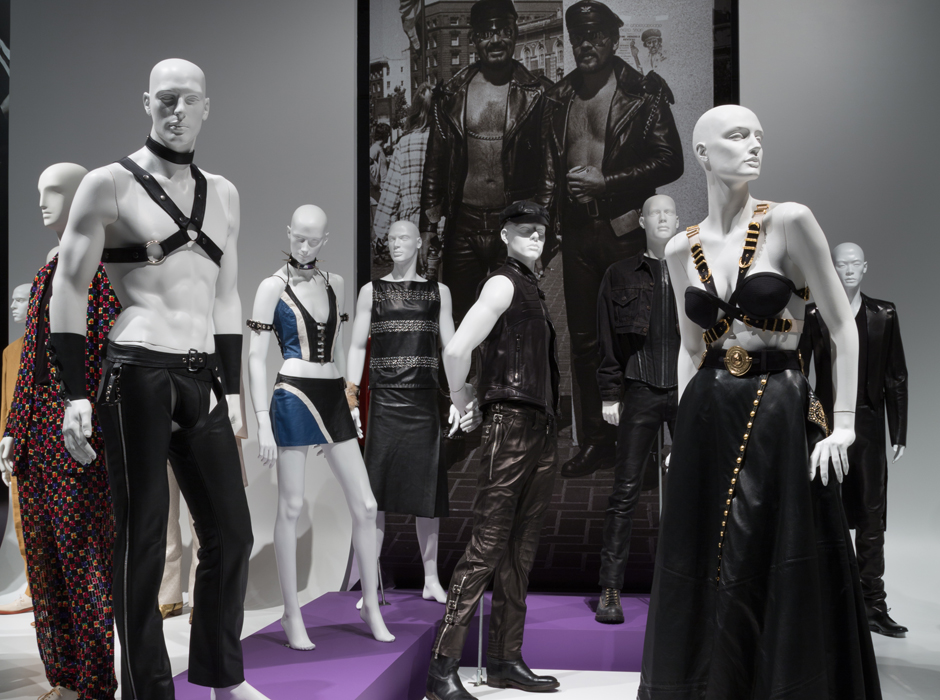 The Museum at the Fashion Institute of Technology (MFIT) will present the groundbreaking exhibition, A Queer History of Fashion: From the Closet to the Catwalk, the first museum exhibition to explore in depth the significant contributions to fashion made by LGBTQ (lesbian-gay-bisexual-transgender-queer) individuals over the past 300 years. Opening on September 13, 2013, A Queer History of Fashion will feature approximately 100 ensembles, from 18th-century menswear styles associated with an emerging gay subculture to 21st-century high fashion.

From Christian Dior to Yves Saint Laurent to Alexander McQueen, the importance of gay men as fashion designers is undeniable in the 20th century. But scholars have demonstrated that, as early as the 1700s, men who loved other men were pioneers in challenging sex and gender roles. Drawing on this research, A Queer History of Fashion: From the Closet to the Catwalk will be organized chronologically, beginning with the 18th century, when cross-dressing mollies, foppish macaronis, and men milliners created controversy.

Exhibition curators Fred Dennis, senior curator of costume, and Valerie Steele, director and chief curator of The Museum at FIT, spent two years researching and curating the exhibition. They worked with an advisory committee of eminent scholars, including professors George Chauncey (author of Gay New York), Shaun Cole (author of Don We Now Our Gay Apparel), Jonathan Katz (author/curator of Hide and Seek), Peter McNeil (co-editor of The Men’s Fashion Reader), and Vicki Karaminas (co-editor of the forthcoming Queer Style), as well as FIT faculty and fashion professionals.
This is about honoring the gay and lesbian designers of the past and present, said Dennis. By acknowledging their contributions to fashion, we want to encourage people to embrace diversity.

We also hope that this exhibition will transform our understanding of fashion history, added Steele. For many years, gays and lesbians were hidden from history. By acknowledging the historic influence of gay designers, and by emphasizing the important role that fashion and style have played within the LGBTQ community, we see how central gay culture has been to the creation of modern fashion.

Oscar Wilde was a key 19th-century figure with regard to both the history of homosexuality and the history of style. Known for his influence on aesthetic dress, Wilde was also identified with a flashy sort of dandyism associated with the most visible urban homosexuals. Although it has not been possible to find clothing actually worn by Wilde or other gay men and lesbians from this period, styles similar to what they wore will be on display.

Elite menswear looks became an important stylistic signifier for lesbians in the late 19th and early 20th centuries. The garonne look of the 1920s brought lesbian style into high fashion. Several extraordinary menswear looks worn from the 1930s on by the great bisexual actress Marlene Dietrich have been made available for this exhibition by the Berlin Film Museum. Also featured will be Yves Saint Laurent’s iconic Le Smoking, which was inspired by Dietrich’s tuxedo.

However, not all lesbians and bisexual women gravitated toward tailored suits. Also on display will be a lavender dress worn by lesbian actress Katherine Cornell and a body-worshipping dress designed by the great couturiere Madeleine Vionnet, who told Bruce Chatwin, They always said I loved women too much.

By the 1930s, identifiable gay or bisexual male designers played a significant role in fashion. Designers from the early- to mid-20th century featured in the exhibition will include Adrian, Cristbal Balenciaga, Pierre Balmain (in collaboration with Bb Brand and Jean Cocteau), Christian Dior, Norman Hartnell, Charles James, and Edward Molyneux. The exhibition will contextualize these designers lives and work by showing the societal homophobia and discriminatory laws that they faced. For example, the sight of women in Dior’s New Look gowns or Balenciaga’s Velasquez dresses threw Coco Chanel into a rage. Director and producer Franco Zeffirelli describes her hissing at girls: Look at them. Fools dressed by queens living out their fantasies.

Facing the very real danger of exposure and arrest, many gays and lesbians adopted a style best described as discreet and invisible. By the 1960s, however, a more openly gay look began to influence mod menswear styles, as gay designers such as John Stephen of Carnaby Street and the tailor Tommy Nutter introduced colorful, decorative, body-conscious styles. Rudi Gernreich was a founding member of the pioneering gay liberation group Mattachine Society and advocated unisex styles such as caftans. In New York City, the Stonewall riots that took place on June 28, 1969, marked the beginning of a more open movement. Drag queens were among the leading participants in the riots, and the first gay pride parades took place the next year.

The AIDS crisis marks a pivotal mid-point in the exhibition. Clothing by a number of designers who died of AIDS, including Perry Ellis, Halston, and Bill Robinson, will be featured, as will a wide range of activist T-shirts for ACT UP, Queer Nation, the Lesbian and Gay Rights March in Washington and the iconic Read My Lips.A Queer History of Fashion: From the Closet to the Catwalk will include a wide range of street and subcultural styles associated with the LGBTQ community, as well as high fashion looks created by gay, bisexual, and lesbian designers. The exhibition will trace how the gay vernacular styles changed after Stonewall, becoming increasingly butch. Lesbian style also evolved, moving from the butch-femme paradigm toward an androgynous, anti-fashion look, which was, in turn, followed by various diversified styles that often referenced subcultures like punk.

The second half of the exhibition will encompass a range of fashions and styles from the 1980s to the present. Some fashions, such as Gaultier’s skirts for men and underwear-as-outerwear, deliberately violated sex and gender taboos. Other high-fashion looks have drawn on queer subcultural styles, like leather and uniforms. But not all gay designers have embraced transgressive and political styles. Many have a strongly idealizing aesthetic that focuses on the creation of beauty and, especially, beautiful things for women.

Emphasizing that gay rights are human rights, the exhibition concludes with a section on gay wedding fashions as the sartorial expression of the issue of marriage equality.

The exhibition design of A Queer History of Fashion: From the Closet to the Catwalk is by Joel Sanders, the well-known architect and author of Stud: The Architecture of Masculinity.

A multi-author book, A Queer History of Fashion: From the Closet to the Catwalk, published by Yale University Press, will accompany the exhibition. Edited by Valerie Steele, the book will feature essays by eminent fashion and gay history scholars Christopher Breward, Shaun Cole, Vicki Karaminas, Jonathan D. Katz, Peter McNeil, and Elizabeth Wilson.

Free lectures and exhibition tours, a two-day symposium (November 8 and 9, 2013), and an expanded educational website will also complement the exhibition. A number of the scholars and designers who served on the exhibitions advisory committees will speak at the symposium or as part of the museums Fall Fashion Culture lecture series.

The exhibition also will have an expanded educational website, organized by Tamsen Young, with a timeline of LGBTQ culture and important events compiled by Alexis Carreno, video interviews, illustrations and excerpts from the exhibition publication, a bibliography, installation photographs, contact information for LGBTQ organizations, and other information useful to a global audience.

To register for the symposium, lecture series, and tours, and for more information on advisors and supporters of the exhibition and website, see www.fitnyc.edu/museum.

The curators, Fred Dennis and Valerie Steele, will be available to speak on a range of subjects, including the history of fashion pre- and post-Stonewall and the emergence of scholarship on LGBTQ fashion history.

The Museum at FIT
The Museum at FIT, which is accredited by the American Alliance of Museums, is the only museum in New York City dedicated solely to the art of fashion. Best known for its innovative and award-winning exhibitions, the museum has a collection of more than 50,000 garments and accessories dating from the 18th century to the present. Like other fashion museums, such as the Muse de la Mode, the Mode Museum, and the Museo de la Moda, The Museum at FIT collects, conserves, documents, exhibits, and interprets fashion. The museums mission is to advance knowledge of fashion through exhibitions, publications, and public programs. Visit www.fitnyc.edu/museum.

The museum is part of the Fashion Institute of Technology (FIT), a State University of New York (SUNY) college of art, design, business, and technology that has been at the crossroads of commerce and creativity for nearly 70 years. With programs that blend hands-on practice, a strong grounding in theory, and a broad-based liberal arts foundation, FIT offers career education in more than 45 areas, and grants associate, bachelor’s, and master’s degrees. FIT provides students with a complete college experience at an affordable cost, a vibrant campus life in New York City, and industry-relevant preparation for rewarding careers. Visit www.fitnyc.edu.

The Couture Council is a philanthropic membership group that helps support the exhibitions and programs of The Museum at FIT. The Couture Council Award for Artistry of Fashion is given to a selected designer at a benefit luncheon held every September. For information on the Couture Council, call 212 217.4532 or email couturecouncil@fitnyc.edu.

Exhibition Sponsors
A Queer History of Fashion: From the Closet to the Catwalk has been made possible thanks to the generosity of The Coby Foundation; MAC Cosmetics; the New York State Council on the Arts, with the support of Governor Cuomo and the New York State Legislature; the New York Council for the Humanities; the Couture Council of the Museum at FIT; dot429; and the FIT Presidents Diversity Grant Fund.

Thanks also to FIT Trustee Richard Anderman, who provided funding for the development of the exhibitions educational website.

Installation images: A Queer History of Fashion: From the Closet to the Catwalk, MFIT, NYC, 2013. Courtesy of MFIT.