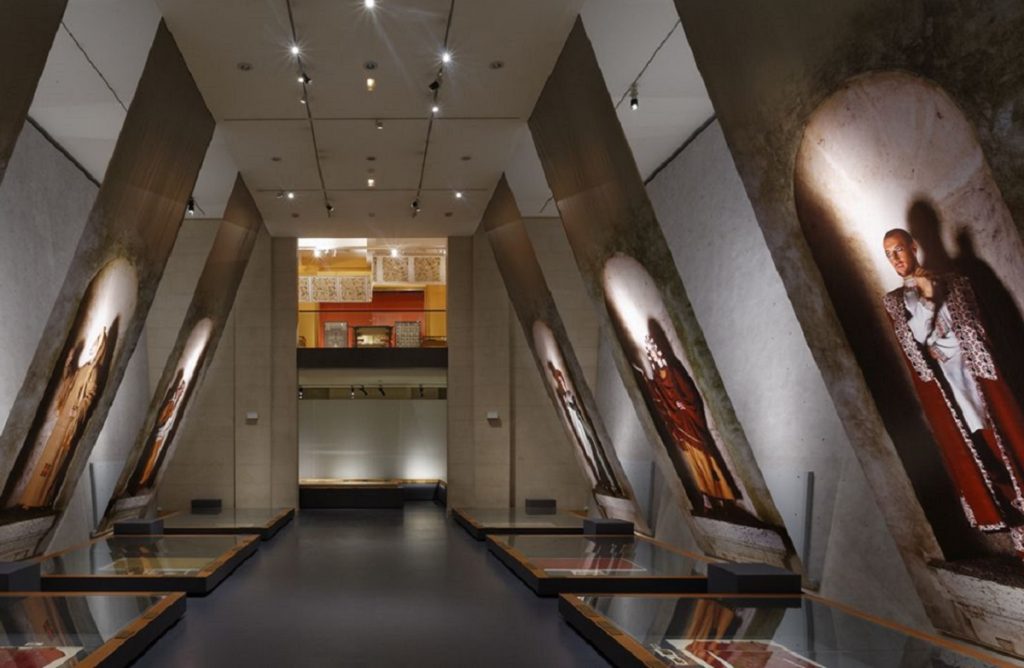 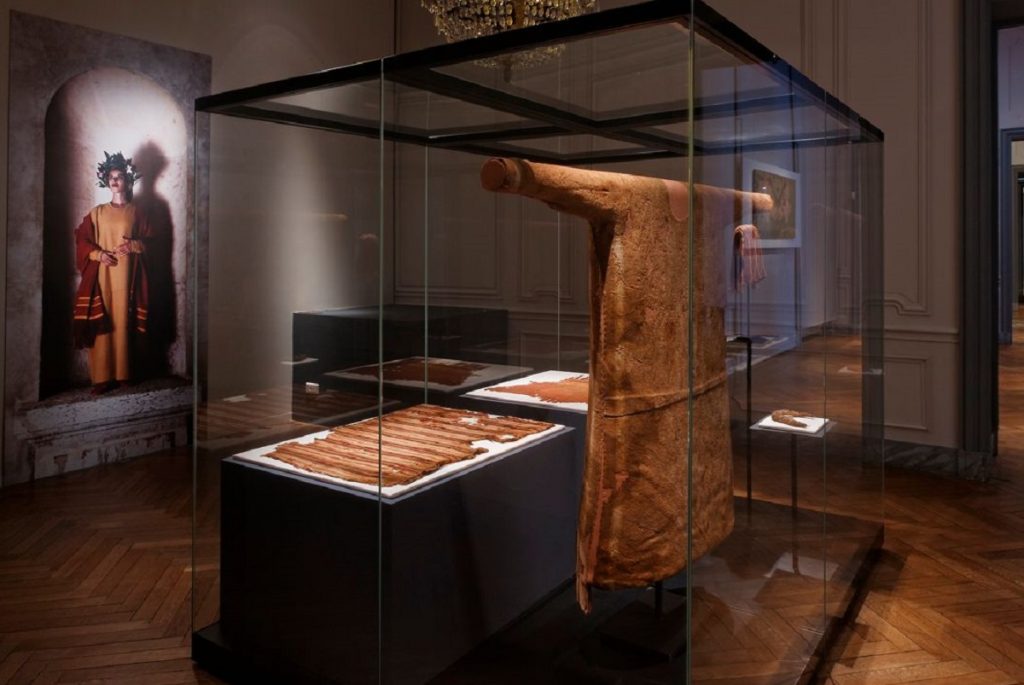 In 1896, Émile Guimet, a famous industrialist from Lyon, obtained the power to carry out excavation work on the mythical Antinoé site.The city had been founded in 130 by Emperor Hadrian at the site of the drowning of his favorite Antinous. The only imperial foundation on Egyptian soil, Antinoé (in Greek Antinoopolis) was intended as a hotbed of Hellenism and refinement. It housed the governor’s palace, and was decorated with remarkable monuments: a triumphal arch, monumental porticoes, temples – the shrine of Antinous, a temple of Isis, a temple of Serapis… -, a theatre, a racetrack… During the Roman and Byzantine periods (until the 8th century), it was undoubtedly one of the most brilliant cities in the Mediterranean world. Commissioned by Émile Guimet, archaeologist Albert Gayet is leading a promising first campaign. Nevertheless, it was during the second campaign that he uncovered the city’s necropolises. The clothes exhumed in the tombs reveal to the world the elegance of its inhabitants. Émile Guimet, immediately convinced of the importance of the discovery, persuaded the Lyon Chamber of Commerce to finance much of the third campaign that would take place in 1898. Its objective is to continue the exploration of necropolises and to provide the Museum of Fabrics with costumes or fragments of clothing hitherto unknown. Early and unique examples of silks, in particular, are revealed on this occasion. The proceeds of the excavation campaign were briefly exhibited in Paris, at the Guimet Museum, before joining the collections of the Museum of Fabrics in 1899. However, they remain mostly unpublished. Indeed, only a few pieces are presented on arrival, the majority remaining in the cash register, “raw excavations”. The success of the exhibition at the Guimet Museum allowed Albert Gayet to continue the exploration of the site. Every year, until 1908, the Costume Palace, the Guimet Museum or the Petit Palais des Champs-Élysées will organize a summer exhibition before the material is dispersed, shared between different museums, Natural History Museums or universities.

The Fabric Museum will receive almost every year, always thanks to Émile Guimet, the most remarkable pieces for the history of costume or weaving. Today, the Louvre Museum has the largest collection of artifacts exhumed in Antinoé. With the recent rediscovery of costumes from the 1898 campaign, the Fabric Museum also reveals itself to retain a major collection. For almost two years, the fabrics forgotten in the original crates have been identified, analyzed and restored to be revealed to the public. The Antinoé exhibition, to life, to fashion. Visions of Elegance in Solitudes presents, thanks to the partnership between these two museums and for the first time, ensembles finally brought together and many unpublished works. For the first time, too, it is truly from the perspective of fashion history that this material can be considered. Indeed, several complete costumes of men and women, from shoes to accessories through coats, shirts or dresses, are on display here. In partnership with the National Opera of Lyon, these costumes have been the subject of identical renditions, staged by photographer Cédric Roulliat. They reveal the fashions of the late antiquity, the taste of elegant fabrics, silks or wool, the influences, too, of a mythical Orient, Persia, whose ceremonial clothes or ornamental repertoire were then adopted. These fabrics also show that Antinoé was a major textile production centre, meeting the demands of a contrasting population, hesitating between a twilight paganism and an increasingly official Christianity.

The exhibition presents the entire campaign of 1898, and the most exceptional elements of the following campaigns, organized around the clothes of the famous “Thais”, in which the heroine of the novel of Anatole France and the opera of Jules Massenet, or of Leukyôné, the pagan found with her larary and attached by Albert Gayet to the reign of Heliogabale, was sometimes recognized. The Louvre Museum has granted significant loans, including several masterpieces exhibited in Lyon for the first time, such as the “Sabine shawl”, finally presented with the elements kept at the Museum of Fabrics and the Museum of Fine Arts in Lyon. The Palace of Fine Arts in Lille and the Museum of Confluences in Lyon also agreed to lend the costumed mummies of a “tank driver” who officiated at the racecourse, a “purple official”, most likely attached to the administration of the palace, and a “Byzantine knight”, wearing the characteristic costume of his rank. Nearly two hundred and fifty works (including seventy loans from the Louvre) are presented in the exhibition (complete costumes, hair accessories, shoes, fragments, drapes, funeral cushions, clothed bodies, dating mostly from the 4th to the 8th centuries, contemporary watercolours of the excavations and photographs of Cédric Roulliat).