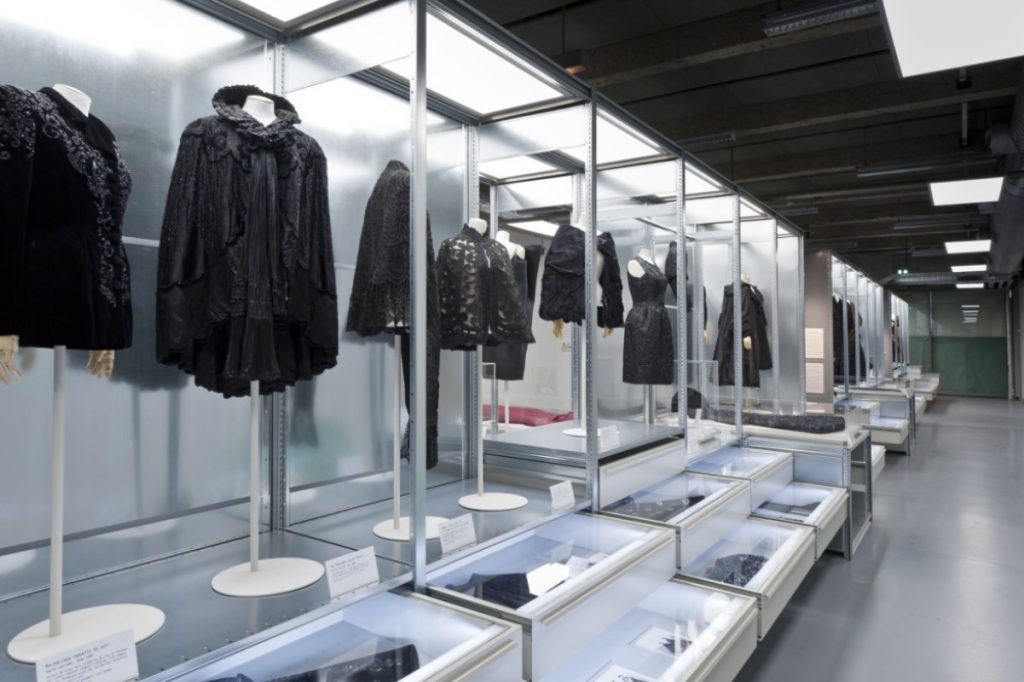 Variations of black repeated in over a hundred pieces from the Galliera collections and the archives of Maison Balenciaga. This exhibition at the musée Bourdelle opens the Palais Galliera’s Spanish season, which will continue with Costumes espagnols entre ombre et lumière (Spanish costumes from dark to bright) at the Maison Victor Hugo (21 June – 24 September 2017) and will finish with Mariano Fortuny at the Palais Galliera (4 October 2017 – 7 January 2018).

The Palais Galliera is paying homage to the couturiers’ couturier, Cristóbal Balenciaga (1895-1972), with an exhibition at the Musée Bourdelle entitled: Balenciaga, l’œuvre au noir (‘Balenciaga, working in black’). The exhibition resonates with the black tones of an alchemist of haute couture. Balenciaga pieces are displayed alongside the plaster casts in the Great Hall and there are more in Bourdelle’s studios and in the contemporary Portzamparc wing of the museum.

Balenciaga’s work sets up a powerful, black-on-white dialogue with the great, late 19th-and early 20th-century sculptor. Black – for Balenciaga’s inspiration: the spiritual underpinnings of his work were the folklore and traditions of his Spanish childhood. Black – for the ascetic taste of this extraordinarily skilful tailor who gave us: the barrel line (1947), the balloon (1950), the semi-fitted (1951), the tunic dress (1955), and, of course, the sack dress (1957). Black – for the monastic influence on the master, of whom Dior once said: ‘Clothes were his religion’.

The first part of the exhibition trail, ‘Silhouette & Volumes’, is followed by ‘Noirs & Lumières’ (‘Black & Light’), and then ‘Noirs et Couleurs’ (‘Blacks & Colours’) – because for Balenciaga, black was more than a colour or even a non-colour; he saw it as a vibrant matter, by turns opaque or transparent, matt or shiny – a dazzling interplay of light, which owes as much to the luxurious quality of the fabrics as to the apparent simplicity of his cut. A lace highlight, an embroidered composition, some twisted metallic tape, a thick drape of silk velvet and, hey presto, you have a skirt, a bolero, a mantilla, a cape reinvented as a coat, a coat tailored as a cape… Here we have day clothes, a suit, a jacket… and over there, evening outfits and also cocktail dresses lined in silk taffeta, edged with fringes, decorated with satin ribbons, jet beads, sequins… and accessories – black, of course. Variations of black repeated in over a hundred pieces from the Galliera collections and the archives of Maison Balenciaga