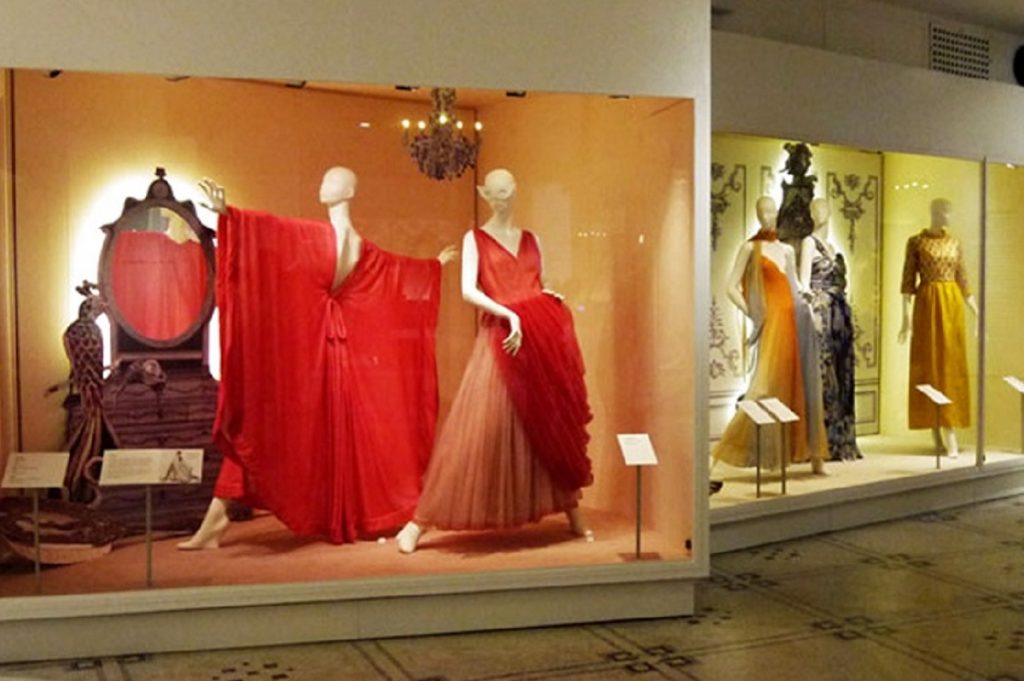 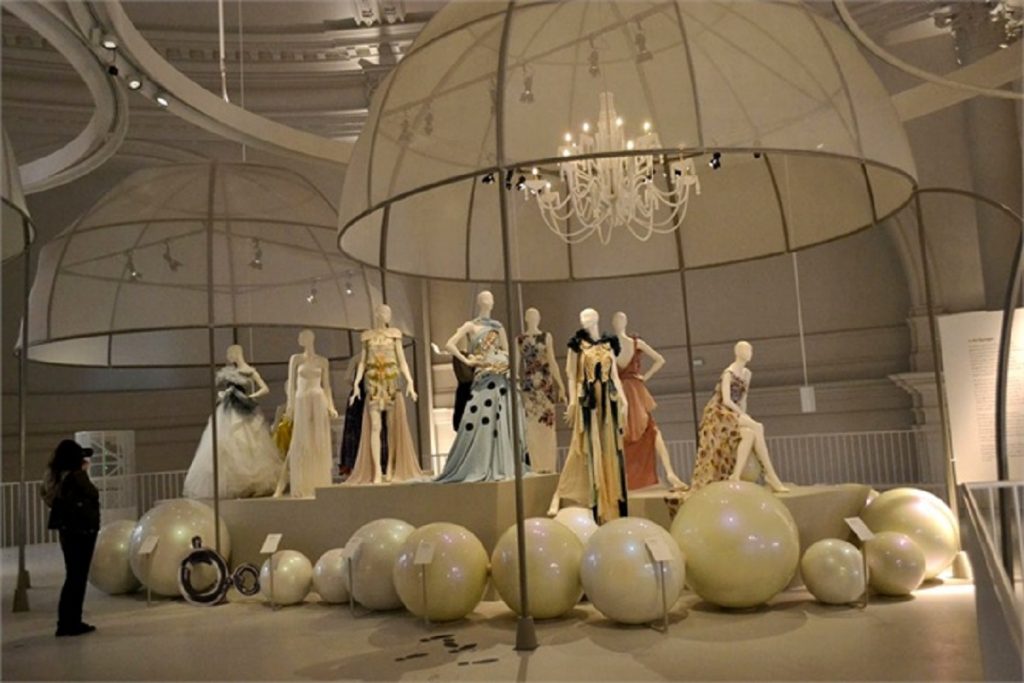 From debutantes and royalty to charity balls and the red carpet, Ballgowns: British glamour since 1950 charted 60 years of stylish evening wear. The exhibition highlighted the styles, silhouettes and colours that have been perennial favourites for many years.

Since the mid-20th century, the occasions for wearing formal attire have evolved from the private event to the public parade. In the 1950s the London season was still organised around established events such as the Royal Academy Summer Exhibition and Queen Charlotte’s Birthday Ball.

Towards the end of the century, as these traditions became less important, events such as the charity ball provided a new arena for displaying extravagant evening wear. Today it is the red carpet and celebrity gala that showcase the gowns of glamorous women.

For the most part, ballgowns have stood apart from fashion, while occasionally reflecting current developments in the fashion world. Yet they remain objects of fascination. The luxurious fabrics, intricate work and fine finish demonstrate the skill of British designers in creating dresses that convey splendour and spectacle.

Designing for the ball

Couture pieces would have been shown as part of a designer’s collection and then chosen by the wearer to be made up in their size and shape.

Traditionally couturiers have been happy to include alterations and adjustments to the dresses in order to incorporate the personal taste and requirements of their clients. Often a designer is asked to design a dress to work around a piece of jewellery. Designer Lindsay Evans Robertson, personal assistant to John Cavanagh, recalled being asked to match the colour of silk to a set of aquamarines ‘the size of gobstoppers’.

Knowing where the client will wear the dress is essential in order to avoid two people arriving in the same garment. For the initial event this may be possible, but when the dress is worn to subsequent parties, the matter is out of the designer’s hands. David Sassoon of Bellville Sassoon recalls being informed in the 1970s of four important clients invited to stay with the queen at Ascot weekend. All four arrived to dinner in versions of the same dress.

Carefully chosen for one special occasion, a ballgown should not only flatter the wearer and demonstrate her sense of style but also illustrate an understanding of the significance of the event to which it is worn.

Women have long relied on the taste of their trusted designer and, particularly important for women in the public eye, their discretion. Gowns often represent decades-long collaborations between designer and client. These relationships often possess a warm, respectful camaraderie.

As Lady Heseltine said of her long-time couturier Victor Edelstein,

‘It was so easy to be his client. I loved going there, I always took far too long about it. One went for a half-an-hour’s fitting and spent up to two hours just chatting and having coffee!'

Equally, the loyalty of a fashionable client can be crucial to sustaining a designer’s career. For as Hardy Amies stated, the ‘best discipline for a designer is a customer with taste’.

Since the 1950s, occasions for wearing evening attire have evolved from the private event to the public parade. Traditionally, the British social season included a variety of balls and other events requiring the most formal dress. Debutante balls, where young women were formally introduced to society, were often their first occasion to wear a grand gown.

As society became more egalitarian, the strict social parameters that the season defined were eroded. After Elizabeth II ended formal Court presentations in 1957, other entertainments arose in their place. By the 1980s, private balls were overtaken by the more inclusive charity balls, which allowed entry to all who purchased a ticket.

Other ballgown-wearing occasions include hunt balls and, in Scotland, Burns Night. Britain’s royal family and state officials observe the protocol of state visits in formal attire, their official dinners and gala events requiring the most elaborate of evening gowns.

The royal gown has always garnered attention and interest. Yet the demands of state occasions are quite specific. The dress must not only be attractive, but must allow the wearer to sit and move easily. It must be free from embellishments which could catch or require attention, and it must be able to support regalia.

In the early 20th century, Queen Mary had the bodices on her evening gowns stiffened with buckram in order to bear the weight of her jewellery. The current monarch has a lighter touch in regards to jewellery, but her dresses must still be able to support the garter sash, which is worn over her right shoulder and to which she attaches various insignia.

On visits abroad, royal garments traditionally incorporate symbols of the host nation. In 1975 on a state visit to Japan, Queen Elizabeth wore a blue chiffon gown embroidered with three-dimensional cherry blossoms in pink. Catherine Walker included thousands of pearls on a dress she designed for Princess Diana to wear on a state visit to Hong Kong in 1989.

Today the work of contemporary British fashion houses such as Alexander McQueen and Vivienne Westwood is championed by younger members of the royal family.

In recent years, evening wear for the grand occasion has evolved. What was once a more strictly defined set of choices has broadened to a wider selection of silhouettes, materials and surface decoration. For many London-based designers, tour de force evening wear is the cornerstone or statement piece for each season’s collection.

As red-carpet events have grown in significance, the paparazzi-lined path now focuses worldwide press attention on how glamorous women are dressed. Such scrutiny leaves little room for misjudgements of taste. As a result, celebrities dress with particular care, both to avoid negative publicity and to make a media splash.

Britain’s fashion designers are still highly accomplished creators of formal evening wear. A rich combination of traditional craft and maverick sensibility ensures that Britain, with London as its engine, remains a successful laboratory for sartorial experiment.

Ballgowns: British Glamour Since 1950 was kindly sponsored by Coutts.