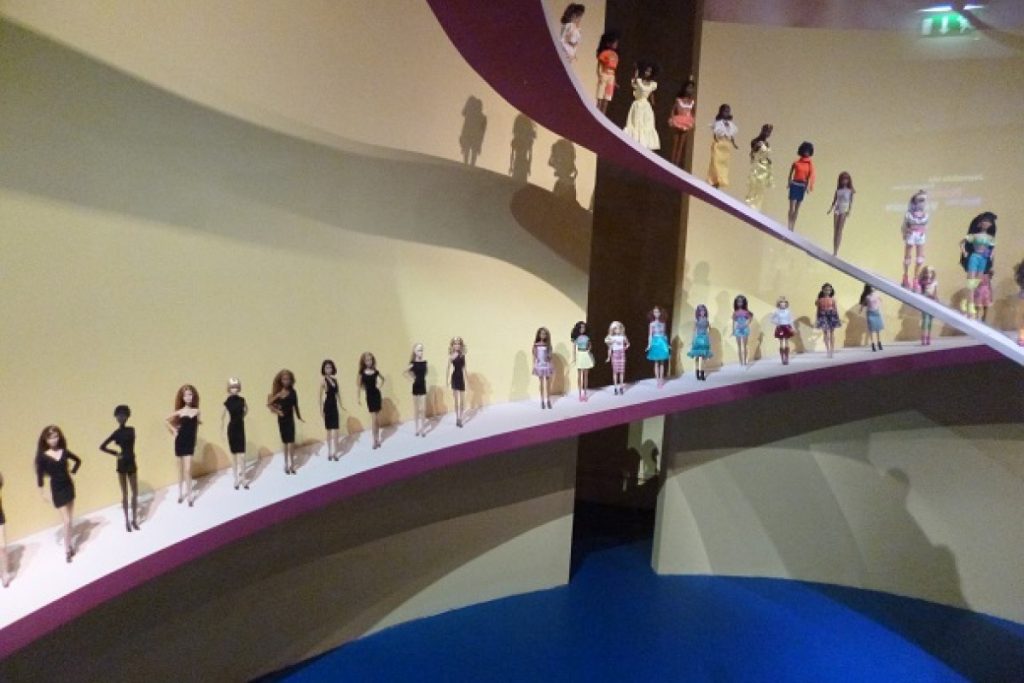 This is the first time that Barbie has received such an unconditional invitation by a French museum. Known for its design, fashion, toy and advertising collections, the Musée des Arts Décoratifs is the ideal venue to pay tribute to this iconic doll, whose story has many dimensions and has made an indelible mark on the socio-cultural history of toys in the 20th and 21st centuries. 700 Barbie dolls are thus deployed on 1500 m2, next to works from the collections of the Museum (dolls, gowns), but also works by contemporary artists, documents (newspapers, photos, video) that contextualize the « Barbie’s lives ».

Drawing on Mattel’s archives and highlighting this still little-known historical heritage, this exhibition provides two possible insights into “Barbie’s lives”: for children by evoking the pure jubilation of a universally known toy, and for adults by placing this emblematic figure in her historical and sociological contexts since 1959.

More than just a toy, Barbie has mirrored a culture and its evolution. She began by embodying the “American way of life” before adapting to social, political and cultural changes and taking on a more universal dimension. Evolving with every new modern comfort, embracing new causes and challenging stereotypes, she has been loathed for her embodiment of the idealized woman and yet, always autonomous and independent, she has adopted all the new dreams and ambitions of contemporary life.

When she was launched in 1959, Barbie and her slender, curvaceous figure marked a revolutionary departure from the traditional baby doll. Watching her daughter Barbara playing with paper dolls, distant descendants of late 18th century fashion plates and the first paper dolls for adults in the 19th century, Ruth Handler, one of Mattel’s founders, began dreaming of a three-dimensional fashion doll. Ruth observed that Barbara and her friends were not at all interested in dolls representing children but solely in those representing women : they imagined themselves in their future lives, as young women rather than as mothers and housewives.

Ruth’s determination finally convinced Mattel’s directors, then all male, to manufacture such a doll. Directly inspired by the German advertising doll Lili, Barbie was launched with her own mythology : born in Wisconsin, Barbara Millicent Roberts has a family and clearly identified friends, but her age has deliberately never been specified so that she can embody either an adolescent or a young woman. She successively has been a high school pupil, university student, nurse and airhostess before exercising more than 150 professions, from the most traditional to the most avant-garde. Barbie has been a vet several times, a palaeontologist, computer scientist, racing driver, schoolteacher, doctor, ballerina, policewoman, and even a presidential candidate four times and an astronaut before Neil Armstrong in 1965. Her ever-present boyfriend, Ken has become just as famous. Barbie is more than just a doll, she is a life.

Several of the fabrication secrets of Barbie’s silhouettes, hairstyles and outfits will be revealed for the exhibition, which will feature models and drawings by those who have masterminded Barbie’s success. A popularity stemming from her ability to adapt to changing times, constantly renewing herself yet always remaining the same. This success can be explained by continuous exchanges with popular culture. Ever since she was created, she also inspired artists such as Andy Warhol to portray her while others have widely played with her image.

Many couturiers have crossed paths with Barbie the « fashionista », and imagined the most extravagant and elegant outfits for her. The exhibition will feature several of these unique creations, by Paco Rabanne, Thierry Mugler, Christian Lacroix, Jean Paul Gaultier, Maison Martin Margiela and Christian Louboutin. In counterpoint to Barbie’s wardrobe, amply displayed for the event and reflecting evolving fashions, the museum will feature several of the most emblematic pieces in its collection.