British – Ever So Nordic 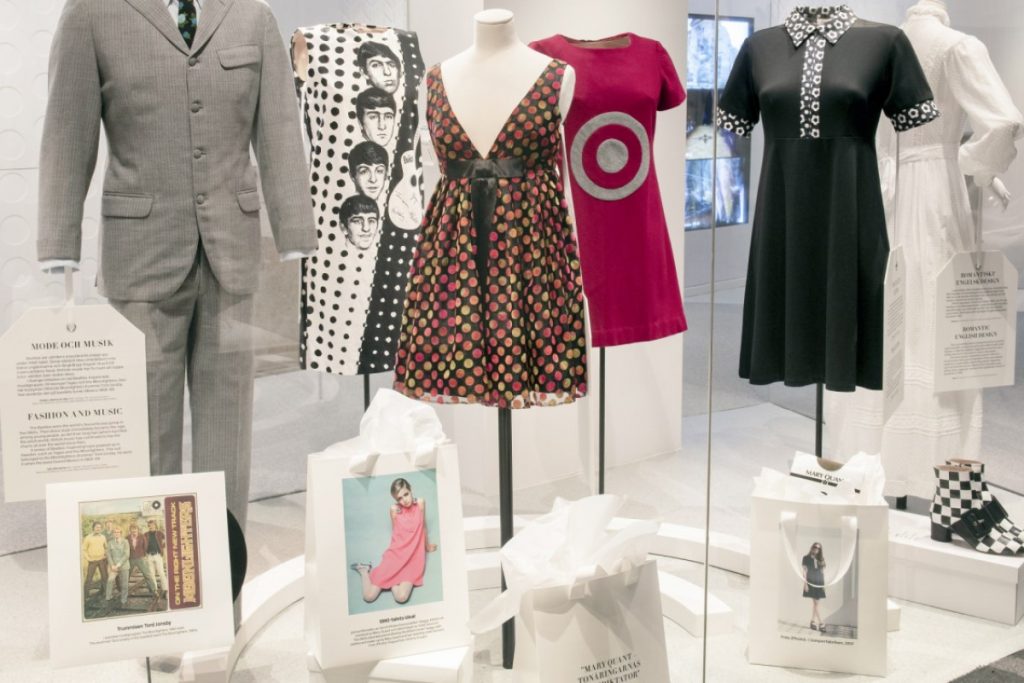 Cardigans, jumpers and trench coats. Tartans and Doc Martens boots. Pyjamas and a cup of tea, a beer after the football match, tennis on Tuesdays and a stroll in the woods wearing a raincoat and wellingtons. These parts of Nordic everyday life are so common that we might not think about where they come from.

The Nordic countries are part of a globalised world. During centuries of trading contacts we have been influenced by nations in a position of power, such as France, Germany, Britain and more recently the USA. This exhibition is about Nordic fashion, clothes style and lifestyle with influences from Britain.

The narrative runs from the Middle Ages to the present day, a story told through fabrics, patterns, clothes and other things that have been shaped into a part of everyday life in Scandinavia. It is British – but Nordic British!

London has been a shopping city for a long time. The Nordic countries, especially Sweden, have had close trading contacts with Britain at least since the Middle Ages. Back then luxurious embroideries were imported to Scandinavia, and in the eighteenth century prosperous farmers desired English wool for their folk costumes.

The demand for British patterns and materials has continued ever since then. Tartan, paisley pattern, corduroy, tweed and innovations such as waterproof cloth have been incorporated in fashions for the Nordic climate. The British royal family’s choice of clothing has also affected and inspired Nordic fashion over the centuries.

Tartan, paisley pattern, corduroy, tweed and innovations such as waterproof cloth have been incorporated in fashions for the Nordic climate

In the 1960s the British changed the way people shop, with trendy small boutiques selling speedy young fashion, for example, from Mary Quant. This was something completely new for Nordic consumers. Unlike, say, France, the British produced both tailor-made, high-status fashions and cheap everyday garments for everyone.

Everyday fashion for many

All this means that the British influence on Nordic culture is visible in many ways in our daily lives: in clothes that we wear every day, spread among all social classes; in the names that we have become familiar with, such as trench coat, cardigan, pyjamas and jumper, and in British phenomena that have become a part of our everyday lives, such as sports and leisure activities.

Sport and outdoor life in fashion

Football, tennis, riding, golf and hunting, and the dress codes that go with these, have been brought here from Britain, incorporated into our clothes style and our lifestyle. Golf trousers were worn by many lads and gentlemen in the Nordic countries in the 1930s and 1940s, mostly off the golf courses. Tennis shirts and jodhpur boots are often worn without an accompanying tennis racket or riding helmet.

Much of the Nordic man’s dress style has its origin in the well-tailored English gentleman, whose fashions were marketed as “English gentleman’s tailoring”. Since the second half of the twentieth century, teenagers’ and young people’s clothes styles have been heavily influenced by the British music scene and by subcultures such as punk.

Nordic and British from the collection

The exhibition is based on Nordiska museet’s collection of dress and fashion, along with a few loans. It shows a broad selection of garments and outfits. It includes luxury products such as embroideries and woollen fabrics, outdoor and sports styles, men’s suits, subculture clothes and everyday garments such as jumpers and cardigans.

Contemporary Nordic fashion designers who have been inspired by British styles and fabrics will be found here. Many influential British fashion brands which are worn by Nordic people are also represented, such as Mary Quant, Fred Perry, Mulberry and Burberry. The oldest object in the exhibition is from the 1340s and the youngest comes from an autumn and winter collection for 2018.

Press kit_eng_British ever so Nordic at Nordiska museet