Club to Catwalk:
London Fashion in the 1980s 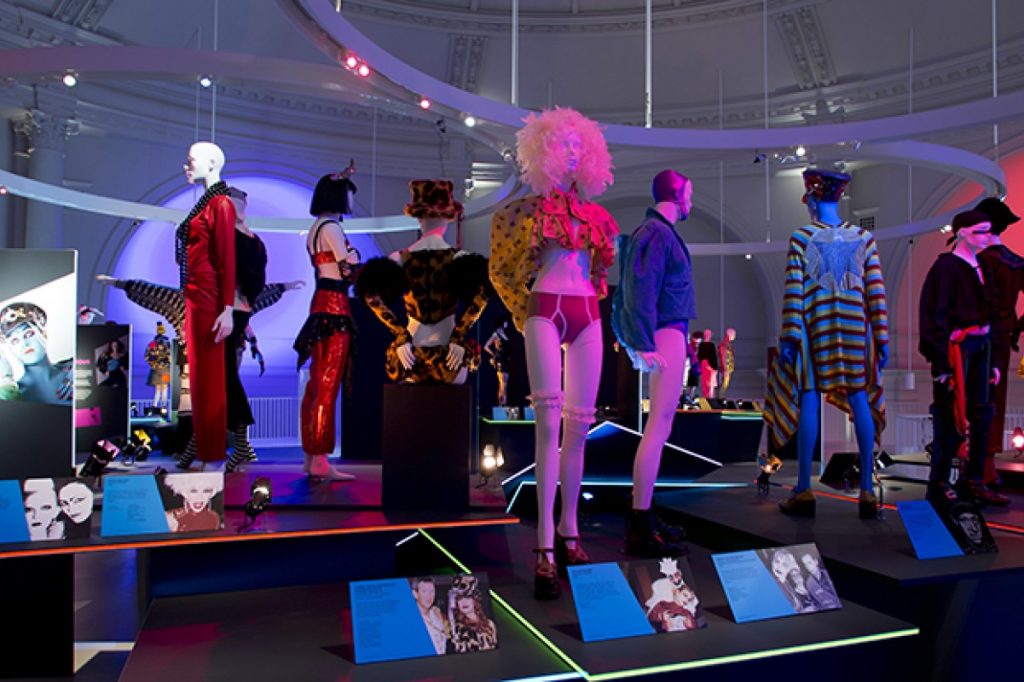 The V&A’s fashion exhibition for summer 2013, Club to Catwalk: London Fashion in the 1980s, will explore the creative explosion of London fashion in the 1980s. It will look at how the impact of underground club culture was felt far beyond the club doors, reinventing fashion worldwide. More than 85 outfits by designers such as John Galliano, Vivienne Westwood and Katharine Hamnett will be on display together with accessories by designers including Stephen Jones and Patrick Cox.

The ground floor gallery will focus on the young fashion designers who found themselves on the world stage for creating bold, exciting looks. The mezzanine gallery will concentrate on club wear, grouping garments by tribes such as Fetish, Goth, Rave, High Camp and New Romantics. This includes clothes of the type worn by Boy George and Adam Ant, as well as more extreme design worn by Leigh Bowery.

To provide a snapshot of the most fashionable and creative designers working in London in the 1980s, the exhibition shows a display of Blitz denim jackets. In 1986, Blitz magazine commissioned a group of 22 London-based designers to customise denim jackets provided by Levi Strauss & Co. The jackets were exhibited at the V&A and auctioned in aid of the Prince’s Trust on 10 July 1986.

Further cases will display garments by influential 1980s designers, with a substantial amount of menswear designs by Jasper Conran, Paul Smith, Workers for Freedom and Willy Brown who dressed Duran Duran. Textile design played an important part of 1980s fashion, with designers such as Betty Jackson working with design collectives like The Cloth, helping to create the archetypal early 80s silhouette of loose shirts and bold prints. Wendy Dagworthy utilized Liberty prints while English Eccentrics and Timney Fowler made print fashionable. There will also be sections dedicated to the energetic, bright clothes of Chrissie Walsh, Georgina Godley, Bodymap and John Galliano.

In the early 1980s Katharine Hamnett pioneered the vogue for stylish, casual clothing made in oversize crumpled cottons and silks. Her designs were often based on utilitarian boiler suits and army fatigues. She conceived a series of  T-shirts emblazoned with slogans, using fashion as the platform for her Green politics. Hamnett caused a sensation by wearing her T-shirt with the slogan ‘58% Don’t Want Pershing’ to meet the Prime Minister Margaret Thatcher in 1984. Bodymap, founded in 1982 by Stevie Stewart and David Holah, produced an exhilarating blend of form-fitting knits, layered stretch Lycra jersey and rhythmic print. As one fashion editorial noted, their inspiration had ‘sprung from the streets, sharpened in the clubs’. The designers gained further momentum through their collaborations with choreographer Michael Clark. Mixing and matching, or ‘bricolage’, was reflected in the titles and themes of Bodymap collections, such as Cat in the Hat takes a Rumble with a Techno Fish, which pulled together elements of Dr Seuss’s surreal cartoon comedy, black-and-white graphics, bright colours and 1980s American ‘bratpack’ films.

John Galliano graduated from St Martin’s School of Art in 1984. His degree Collection, Les Incroyables, was inspired by the French Revolution and he spent many hours studying the dress collections at the V&A. Two of Galliano’s menswear ensembles from the 1985 Fallen Angel collection will be on display, along with a pink, muslin dress from 1986.

This section will also explore the emergence of knitwear as fun and fashionable, with examples from Kay Cosserat, Artwork and Patricia Roberts, while evening wear by Bruce Oldfield and Anthony Price will reflect the more glamorous aspect of 1980s fashion.

London’s clubs in the 1980s acted as a site for the convergence of music and fashion and provided a safe environment in which young people could experiment and mix with those of similar tastes. Fashion designer Stevie Stewart of Body Map noted that ‘each group of people, whether they were fashion designers, musicians or dancers, filmmakers or whatever, living together, going out together and at the same clubs … had a passion then for creating something new … that was almost infectious’. Examples of the resultant looks will be displayed, ranging from the exaggerated, exotic styles favoured by the Blitz crowd, through the distressed styles of Hard Times, to the eclectic mixing and individual expression of Taboo, to the dance influenced looks of acid house.

In September 1982, The Face observed a ‘hardening of attitudes in music and fashion’ that reflected the economic conditions of Thatcherite Britain: ‘Ubiquitous Levi’s worn into holes, sweatshirts serving their purpose and losing their sleeves, leather dominating everything … big boots and no socks and espadrilles … T-shirts ripped and torn’. The ‘Hard Times’ look coincided with a revival of rockabilly style in clothing and music, reflected in leather designs by Lloyd Johnson.

At Taboo, so-called because ‘there is nothing you can’t do there’, Leigh Bowery became the ringmaster of a carnivalesque nightspot, where parodying the norms of everyday life and ‘fashion’ was encouraged. Clothes designed and worn by Bowery will be on display along side fetishwear by Pam Hogg and Vivienne Westwood. Clothes by Christopher Nemeth and jewellery by Judy Blame will show how customization, DIY and re-appropriation of objects prevailed as the club look. Michiko Koshino’s first store in Covent Garden had a dance club atmosphere and included DJ turntables to complete the effect. In 1987, she began a line of menswear called Motorking, which was worn by David Bowie and Moby. Her club designs included garments made from inflatable plastic fabric that blurred the distinction between art and fashion.

Rave and euphoric house nights, where the combination of dance music and drugs created an atmosphere in which inhibitions were totally gone, changed dress once again. Following the summer of 1987, a number of DJs began to recreate the sound and atmosphere of the Ecstasy-fuelled Ibiza dance clubs. The loose shapes of the early 1980s disappeared and a new kind of tight fitting club wear evolved that featured day-glo colours and metallic tones. This movement is represented by the designs of Rifat Ozbek and Westwood’s silver leather ‘armoured’ jackets. The atmosphere of friendly and fun clubs like Shoom began to be reflected in much more casual styles. The dressed-up aesthetic of earlier clubs, like Taboo, was replaced by ‘ponchos, dungarees, and loose T-shirts bearing the yellow Smiley motif’ as reported The Face in June 1988.

A small club-like area will be created within the space to show film footage of clubs from the 1980s and stream music compiled by Jeffrey Hinton. There will also be unique garments made for club stars such as Leigh Bowery, Scarlett and Juliana Sissons. The clubs were a place to perform and shine and the clothes, worn by men and women, were extreme and made a statement.

The exhibition will feature magazines of the time – The Face, i-D and Blitz – that captured and propagated the club and street look to a wider audience. The Face heralded the arrival of the ‘style’ magazine and combined a sense of immediacy with the high-end production values of Vogue and Tatler. i-D was launched in  August 1980. It adopted a radical agenda by showcasing street fashions and featuring non-professional models. Essentially a fashion fanzine, this ‘exercise in social documentation’ evolved into a magazine that, alongside The Face, was considered the definitive ‘style bible’ of the 1980s.

Accessories were an essential part of any clubber or fashion follower’s wardrobe and the 1980s launched the careers of some hugely influential accessories designers. The work of Judy Blame, Bernstock Speirs, Patrick Cox, Johnny Moke and collaborations with Sock Shop will be on display alongside the Filofax and Mulberry Bags.

The exhibition is curated by V&A Head of Fashion, Claire Wilcox, and Wendy Dagworthy is the expert consultant.