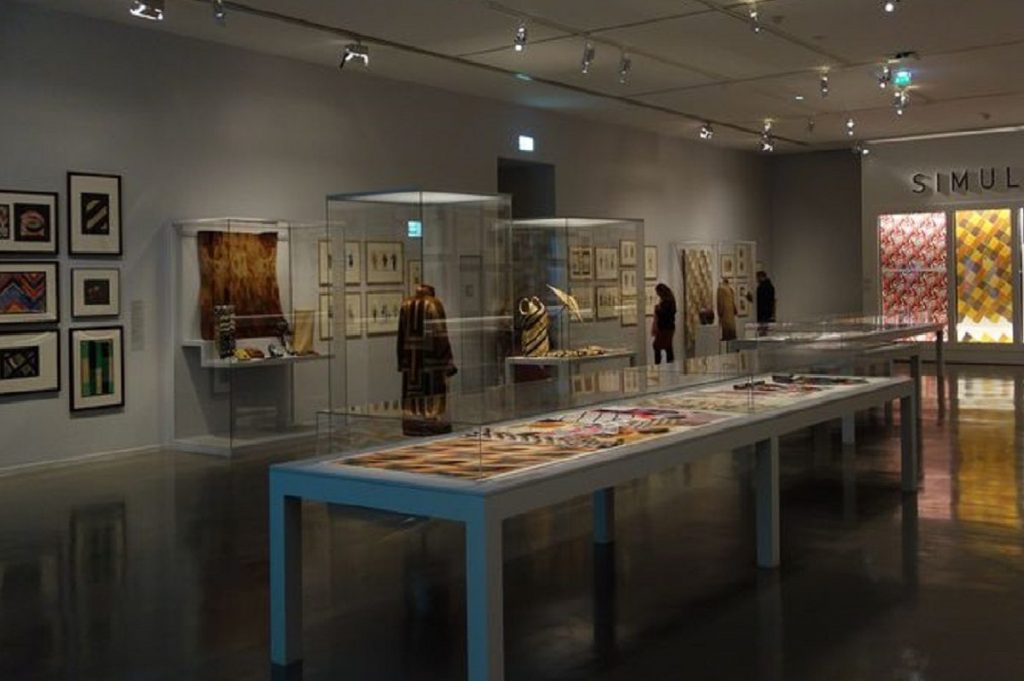 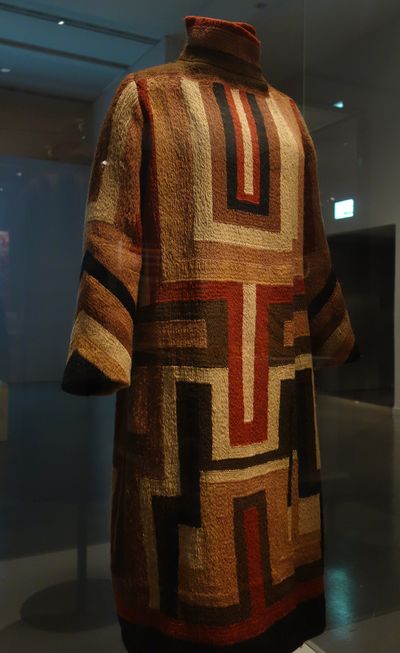 Sonia Delaunay (1885–1979) was a modern artist and designer who merged art and everyday life. Her work encompassed paintings and drawings, painted ceramics, neon light sculptures, posters, and textile and costume designs. Committed to transforming the world through color, she designed dresses and coats, illustrated books, and painted scarves and canvases with equal fervor. More than any other media, textiles proved her idea that color was “the skin of the world,” and for more than forty years, she designed and produced textiles that were commercially successful and enormously influential.

Born in Ukraine, Delaunay was adopted at the age of five by her wealthy maternal uncle, Henri Terk, and raised in St. Petersburg. She excelled artistically and eventually went to Paris to study. There she gained access to a burgeoning artistic community and found a kindred spirit in the painter Robert Delaunay, who became her husband in 1910. Together they lived and wore their art, appearing in garments designed by Sonia that reflected their theories about color and movement, which they called Simultaneity. She continued to design under several monikers, including Casa Sonia, when the Delaunays lived in Spain and Portugal during World War I, and Maison Delaunay, when they returned to Paris in 1920. During these years, especially after she began her enduring collaboration with Metz & Co department store in Amsterdam, textiles gave her the freedom to expand and reconceive her world in color.

It has been nearly thirty years since a major American museum has presented an exhibition on Delaunay. Color Moves: Art and Fashion by Sonia Delaunay honors the artist’s exuberant work and offers an insight into her creative design process—from sketch to master print to design cards and final yardage. According to Delaunay, her paintings “became more accessible and understandable through my fabrics, which for me were exercises in color.” The more than 300 works gathered together in this exhibition clearly support her belief that textiles and design contribute to the comprehension of modern art.

These exquisite jeweled objects highlight the creative and spirited era broadly examined in The Jazz Age: American Style in the 1920s and showcase the collecting skills of Prince and Princess Sadruddin Aga Khan. Both connoisseurs of artistic traditions valued for their intricacy of detail –he for Persian miniatures, she for early books and manuscripts – their eye for complex creations is manifest in these boxes for cigarettes, compacts, and vanity cases, as well as in the jeweled clocks and watches. True “objects of vertu”— luxury objects whose virtuosity of craftsmanship is at least as important as their function —these small compositions incorporate geometric and arabesque motifs in enamel, or exotic scenes from the Far to Middle East in inlaid shell. Designed mostly for women engaged in socially adventurous activities—such as cigarette smoking, going to night clubs, applying makeup in public, or checking the time—they were later collected as works of art more than for use. Prince Sadruddin, born in Paris, Harvard educated, multilingual, and multicultural, worked for over 40 years for the United Nations, serving as UN High Commissioner for Refugees for 12 years. A co-founder of the Paris Review and an ardent environmentalist, he was also a great art collector, especially of Islamic Art. This extraordinary and extensive collection, created for his Egyptian-born wife Catherine from 1972 until his death in 2003, has never been exhibited publicly.