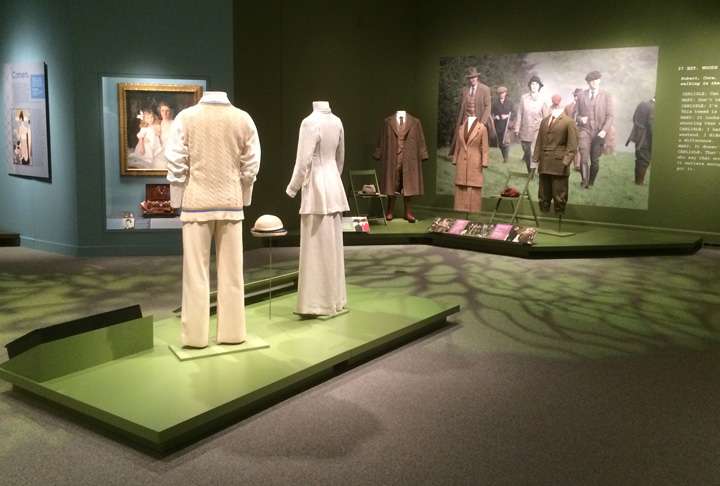 Costumes of Downton Abbey was an original exhibition of exquisite designs from the award-winning television series. Forty historically inspired costumes from the television show were displayed and supplemented by photographs and vignettes inspired by the fictional program and by real life at Winterthur so visitors had the chance to step into and experience the world of Downton Abbey® and the contrasting world of Winterthur founder Henry Francis du Pont and his contemporaries in the first half of the 20th century.

The line between the fictional world of Downton Abbey and the real world can become blurred as we get close to the characters week after week. Costumes of Downton Abbey gives us the opportunity of a behind-the-scenes look at their costumes and reminds us that we are looking at costumes and not actual historic garments. They are, of course, historically inspired.

In real life, costumes often look different from how they appear on screen. Television cameras have a way of changing their color and even texture. Similar to how actors are slathered with cosmetics to appear natural on screen, costumes are often embellished with details and texture to achieve more light or movement. Part of the pleasure in viewing them up close is seeing evidence of use and construction. The intimate look that Costumes of Downton Abbey affords us reveals the vintage fragments such as lace, pleating, and beading that costumers incorporated into new fabric. Such additions are not uncommon and are meant to both add authenticity and enhance the costumes for dramatic effect on screen. For example, one costume featured in the exhibition is that of the character of Mrs. Hughes, who wore a heavily beaded and appliquéd, black-on-black patterned dress—which would be an unlikely work dress in real life.

Seeing the various costumes of the fictional characters who wore them on the show makes us think of their real-life counterparts and the roles that they played, the lifestyles they lived, and how their dress reflected their activities and responsibilities. The costumes therefore set the stage for one of the most interesting aspects of the exhibition—the contrast and comparison between the fictional but historically accurate British country estate in the period drama and the real-life American version of the same era—Winterthur. Supplementing the costumes are photographs and vignettes inspired by the television show and by life at Winterthur, that illuminate the similarities and differences in the etiquette, traditions, activities, and environments of each.