Culture/Counterculture:
Fashions of the 1960s and 1970s 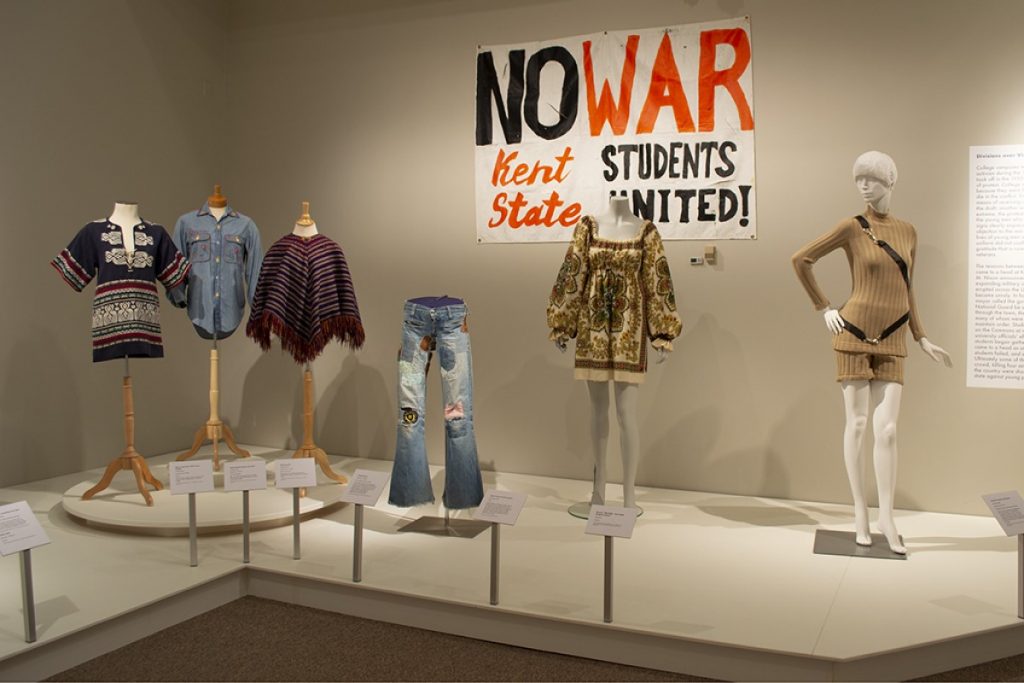 The exhibition Culture/Counterculture looks at fashions of the 1960s and early 1970s with a particular focus on the generation gap during that period. The exhibition is scheduled to coincide with the 50th anniversary of Kent State’s shootings on May 4, 1970. Almost 50 years ago, the shootings of Kent State University students by the Ohio National Guard brought to a head the cultural divides that had split the nation. There was a sharp contrast between supporters of the establishment and those opposed – the culture and the counterculture. These cleavages in society saw their clear expression in the fashions of the time. The exhibition draws from the rich holdings of the university’s historic costume collection, private and institutional lenders including the Rock and Roll Hall of Fame, as well as archival material from the May 4 collection.

This exhibition will show the divergence and sometime convergence of different influences from various social, economic and political mindsets. The exhibition juxtaposes high-end fashion of the establishment and pieces worn by celebrities including Dinah Shore and Miss America Bess Myerson against the variety of youth styles including DIY designs, globally inspired looks and pieces that push the traditional distinction between men and women’s wear. The late 60s were also a period of heightened race tensions in the United States. While entertainers such as Diana Ross and Jimi Hendrix became style icons, everyday African Americans continued to fight for their civil rights.

Couture out of Paris was out of reach to most Americans. The styles established by designers such as Coco Chanel and Cristobal Balenciaga, both of whom were at the end of their careers in the 1960s, largely appealed to a mature clientele. Younger designers both in France and in the United States developed starkly different styles that both catered to a younger buyer and looked to the youth for inspiration. Ultimately the disruption in fashion created by this generation of Baby Boomers called into question the dependence of styles on Parisian haute couture altogether. New sources of inspiration included musicians, experimental materials, and non-western clothing styles such as Nehru jackets, dashikis, and caftans. Clothing that was crafted at home using techniques such as patchwork and tie-dye also became popular.

Many styles we still wear today have their roots in the counterculture of the 1960s. College campuses in many ways led the push to more casual clothing including the growing move towards women wearing pants, the enduring popularity of message tees as political and social commentary, and the ubiquity of blue jeans. Many of the tensions of the period focused on questions of race, gender identity and military involvement – all of these are still very relevant today. Message tees and denim continue to communicate protest and resistance to authority. The exhibition will conclude with a coda that draws explicit links between 1960s fashion and contemporary dress. With this exhibition, we invite visitors to remember and perhaps gain new insights into this historic moment and to consider its legacies today.