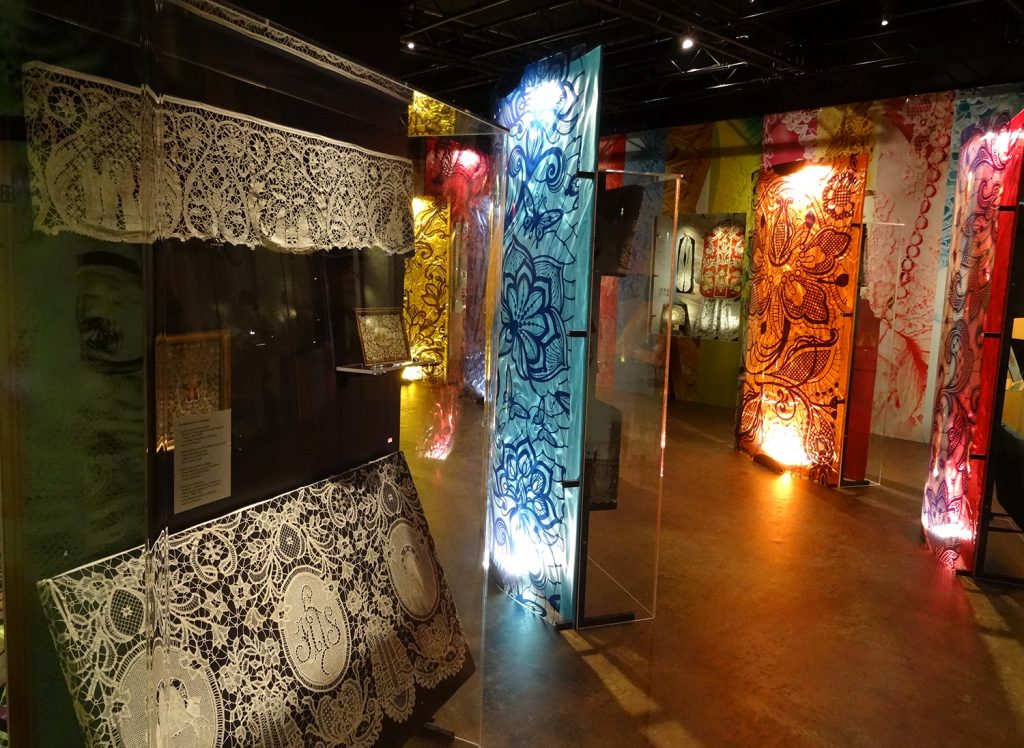 Whether made with a needle or spindles, a lace is a creation that requires dexterity, self-sacrifice and above all a prodigious working time. The selling price of this luxury product was exorbitant.

Laces are accessories whose uses, designs and techniques change with fashion. Their finesse and quality and even their length, which is codified, reflect the wealth and social rank of those who wear them.

Modes et dentelles à la Visitation allows you to discover these techniques but above all to admire the extravagant precision of lace makers through 150 works. These exceptional pieces were notched by leading workshops in the whole of Europe or sometimes by particularly gifted religious, since the late 16 th century until the 1960s.

One might be surprised to find such treasures in female convents. However, although cloistered, the Visitandines are linked to the civil society from which they come. When they receive frills of dresses or precious clothing accessories as gifts, which, out of fashion, can no longer be worn in society, they transform them for the divine liturgy. These women know the market value but also the prestige of these linen or silver and gold lace and are proud to offer them in turn to God.

The museum has gradually unveiled its collections over the past ten years through thematic exhibitions accompanied by a scientific reference book. Among the 12,000 works managed at Moulins, the quality and state of conservation of the textile collections have given the Museum tangible notoriety on the national and international scenes, both among the general public, as well as among researchers and academics. Among this set, unique in Europe, lace is one of the last unpublished sections, the study of which will complete a series begun in 2007 for the Order of the Visitation, but which will bring knowledge at the national level on a demanding technique, which was at the heart of civilian fashion for almost four centuries.

So what a privilege to allow the discovery of this heritage from all over France. Because seen from the outside, surrounded by its fence, each monastery seems impervious to the world and all oriented towards its life of prayer. But on closer inspection – and this is what the collections prove – the productions specific to each century are a faithful reflection of the civil and secular fashions that shape people’s daily lives. Fashions and trends, frequently launched by the world, are nourished and inspired by the spirit of the decorative arts of the time.

Today the word “lace” irresistibly evokes fashion and more particularly the image of women, the lace-maker, wise and diligent, who performs it and the more coquettish one who wears it, frivolous or charming. The historical reality of lace is quite different. Indeed, it is not particularly feminine at its beginnings since the men of the XVII ° century then wear as much as the women.

The lace, worn on the sleeves, on the collar, on the headdresses and hairstyles, plays a major role in aesthetic and social foil. More than jewelry and rich fabrics, lace is truly the outward sign of wealth par excellence for several centuries. And as Anne Kraatz wrote in 1997 in her book Dentelles “even if it is not in fashion, lace will not go out of fashion. Its name alone will always be enough to evoke in the minds a vision of luxury and elegance inexpressibly linked to the notion of social rank. ”

As for its manufacture, it involves much more than the diligence brought to a work of lady, made for pleasure and perhaps out of idleness. It takes an apprenticeship that often begins at the age of five. It is hard work, spoils the eyes and the back and leaves no time for anything else. To fuel the sartorial fantasies of both men and women, hundreds of thousands of people have worked with lace. In view of the market value of this art and the demand on the market, new production centers are developing in Italy, Belgium and France. Each one trying to imitate, then to improve the technique of the old centers, Bruges, Alençon, Milan, Brioude, Le Puy-en-Velay, Retournac are as many places of installation of factories as the names of specific points and decorations invented here,

Thus “the point of France” is regulated by Colbert in his ordinance of August 5, 1665. This term included all the productions to come “as well with the needle as with the cushion” resulting from the royal factories of lace.

If the pieces of small sizes were intended for clothing (collar, headdress, sleeves), larger sizes were also made for furnishings such as dressing table. These large laces are expensive. We know that Louis XIV buys during the month of July 1666 alone for 18,491 pounds of points from France to the royal factories. In comparison, the annual salary of Charles Le Brun, painter to the king and director of the Gobelins factory, is 11,200 pounds.

The Musée de la Visitation is fortunate to keep and be able to present a panel that is very representative of the diversity of this European production, adorned with foliage, scrolls and foliage inspired by botany and even entomology.

The young women who enter religion at the Visitation move away from the world, but they keep contact with their families and many benefactors who materially support the communities. Reading the Annals of the monasteries and the books of gifts brings out all kinds of people ranging from the great of this world to the little people or anonymous donors: sovereigns, the clergy – popes, bishops, chaplains and confessors – but also the parents of the students. boarders and especially the families and friends of the nuns. The sisters do not only receive furniture or money. Laces, given their pecuniary value, but also sentimental once they have been worn by family members are offered by them and benefactors. Bridal veils, scarves,
Then these clothes are transformed for use in Catholic worship. Indeed, when a postulant returns to the monastery, she abandons her cloakroom. The beautiful dress worn on the day of the ceremony, but also her other outfits, such as caps, are then available to the sister in charge of the work. The sacristan sisters cut in these pieces in order to embellish the ecclesiastical clothes (alb, ratchet…) but also the liturgical linens: tabernacle veil, tablecloth, etc.… Thus “nothing is lost and everything is transformed”.

Sometimes the donations are kept as they are, like that of the Countess de Meuneuf who in 1753 offered to the Visitation of Rennes the lace of her late husband, but asked that: “The most beautiful must make a tie for the bust of Saint Francis of Dirty ”, how far does fashion go!

Among the themes addressed in our books, the one published in 2008, entitled “Fastes and exuberance”, dealt with the magnificence displayed in the liturgical ceremonies on the occasion of the feasts of beatification or canonization of the saints of the order: Saint Francis of Sales in the 17th century, Saint Jeanne de Chantal in the 18th century, then Saint Marguerite-Marie Alacoque in the 19th and 20th century.

These exceptional works made from the most precious materials concern fields as varied as goldsmith’s work, gold, silver and silk embroidery, painting, illumination, carved-gilded wood and can be found of course in the art of lace. The peculiarity of these works also lies in their excellence, finesse and personification. Not only do the visitandines know how to draw and embroider to perfection, but many have mastered the art of needle or bobbin lace.

The creations of the visitandines shine by their excellence. Indeed, civil lace makers had to produce quality lace at affordable prices and therefore they devote a reasonable time to it. The nun, by virtue of her state of life, finds herself out of time and free from concern for profitability. Its activity having no commercial purpose, it is silent prayer, recollection and gratuitousness which are expressed through all these points, like a thank you, a thanksgiving for God.

This long-suffering for work in a cause that transcends them explains their almost unlimited creativity; hence these decorations teeming with flowers evoking paradise, these pageantry points which adjoin the technical feats of strength illustrating scenes specific to the spirituality of their order. From time to time the chronicles show a legitimate pride in their achievement. Here it is about a “quality” drawing executed in 1779 at the monastery of Carpentras: “our dear sisters, worked a dawn, it is an England of about three sides in height, that they shot on the model of a lace which was used for the toilet of the late Queen Mother Marie Leszczynska, the copy was found so similar to the original, that it surprised the most skilful. ”

They perform works of unusual refinement for lace, whose civil techniques are enriched with strictly decorative stitches, sometimes difficult to see with the naked eye. This virtuosity is the mark of their respect for God and for the saints of their order.