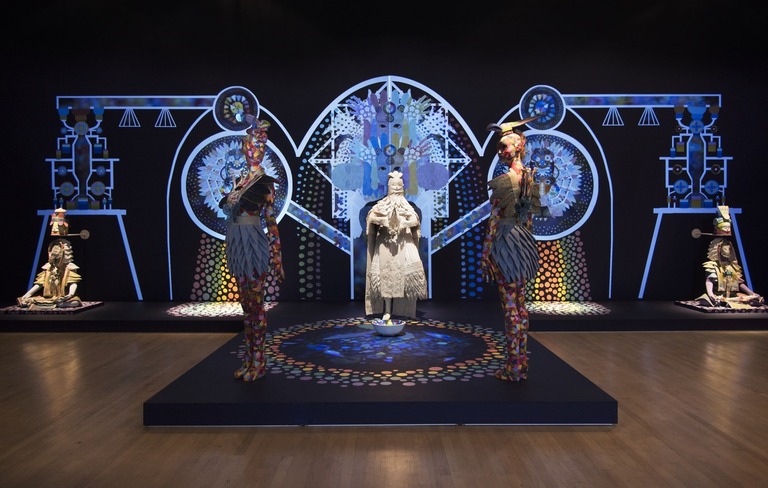 Masks stop you in your tracks. In masquerade everyday concerns, and everyday rules and power relationships, fall away. The artists behind the masks use these moments of temporary reversal to reveal deep truths. By becoming someone or something else, they suggest new possibilities.

For many African artists, masquerade has historically been a catalyst for public engagement with the key issues of their time. Masquerade has also served as a platform for artistic creativity, as both sculptors and dancers regularly invent new genres and interpret existing ones to speak to the issues of the moment. However, where masks have been separated from the physical fact of performance, where they have become collected objects divorced from their performers (and often their costumes), their larger critical and artistic messages have often been lost.

This exhibition features some twenty-five artists from Africa and beyond who, by responding to the history of African masquerade, work to reconnect masks and bodies with performance in order to address twenty-first-century issues. Rooted in, and often informed by, historical mask traditions, the artists assembled here tackle key questions of our current moment—the potential and limits of cross-cultural understanding; women’s agency; and queerness, among others—while inviting us to the sort of heightened awareness that masquerade provides.

In so doing, they also remind us that some of the apparent innovations of Western modern and contemporary art, such as the trends away from pictorial representation toward assemblage and abstraction, or performance and participatory practice, have considerably deeper, African roots. Finally, the artists and their work reveal the extent to which “Africa” is truly global.

Now fragments, these museum objects were once contemporary art, responding to the very specific needs and concerns of their time.

African masks are more than just sculptures in wood under plexiglass. They cannot be fully understood without reference to the costumes, dances, music, and audiences that once accompanied them and transformed their performers into beings beyond themselves. Sometimes sacred, sometimes secular, masquerade in Africa is always a platform for popular culture, yet one that is intended to affect the world and its inhabitants. It is a performance art of action.

Given these elements, each performance is a unique event. Masks have always been invented and reimagined in response to both local needs and a global network of ideas and pressures. This creative process is, in fact, typically rooted in movement and dance—the sculpting of a mask is often the last step in its development. Yet once African masks became commodities, their original dynamism and innovation disappeared. Not only were the ephemeral dance, music, audience, and often the costumes accompanying them gone, but the identities of their performers and sculptors were typically lost as well.

Nevertheless, these museum objects came from particular times and places; they were once contemporary art, responding to very specific needs and concerns. Today, they stand to remind us that even the most futuristic-looking artworks in the galleries that follow have preexisting, global, African roots.

Covering the body can transform one into a figure capable of revealing and affecting the world around us.

Emeka Ogboh’s Egwutronica soundtrack invites us into the masquerade moment, an instant in which ordinary time and everyday concerns are set aside to consider, observe, and partake in something far grander. The works in this section begin the process of restoring African masks to their fuller, original performance context. They also remind us that a mask is incomplete without both costume and performer.

Two magnificent costumes from the Brooklyn Museum’s African collection—one made of raffia; the other, of textile fragments—illustrate the centrality of the body in masquerade. While now worn by mannequins, they both stand as signifiers for the performers who originally gave life to them. One, the Yoruba egungun, reminds us that a “mask” need not mean a wooden covering for the face at all.

The contemporary works in this section, in turn, each play with the relationship between costume and the body. Together, they demonstrate how covering the body can transform one into a figure capable of revealing, and affecting, the prejudices and expectations of the world around us—whether in moments of heightened reality like masquerade, or in everyday life.

Disguise can be a tool for policing bodies, for revealing and often reinforcing society’s structures.

While disguise can be liberating, offering the possibility of becoming someone else, it can also be used to express social limits. Like any performance genre, masquerade is fundamentally open-ended.

Through disguise, a performer can become an archetype, a symbol who stands for a larger idea or belief. Masked archetypes in performance occur throughout many cultures, from ancient Greek theater to some of the African masquerades (Igbudu, Okobuzogui) seen earlier. In all cases, the performer’s role is focused, at least in part, on teaching a lesson designed to impart rules for proper behavior and how to live an ethical life in contemporary society.

Disguise can be a tool for policing bodies and taking control, quite directly. The power necessary to control people in this manner depends, in large part, on the extent to which the masked person is physically marked and differentiated from others. The masks used, from towering Bamum wooden headdresses to depersonalizing police riot helmets, are powered by their terrifying, not-quite-human, expressions.

These disguises are an expression of power in which society’s structures are revealed and reinforced, showing the world not as it could be, but as it is.

A nonhuman being can sometimes make it easier to understand a truth about human nature.

By concealing the identity of the performers, masquerade invites participants to a deeper and more universal understanding of what it means to be human. By dancing with a mask, a performer can, in collaboration with the audience, bring new types of not-quite-human beings into existence. Through the intervention of a nonhuman being, it is often easier to understand a truth about human nature.

Like the Mossi masks encountered earlier, the hybrid characters that follow combine the traits of a variety of different features from both the human and natural worlds. In so doing, they offer visions of transcendence, reflecting the concerns of the current moment while also connecting them to forces and histories beyond living memory.

In this section, Nandipha Mntambo and Walter Oltmann, two South African artists—one black, one white—play with disguise as a way to explore what it means to be truly human. Saya Woolfalk, in turn, takes another approach, inventing an entire artistic world filled with characters reflecting her own compound identity. These characters invite viewers to become clients of a futuristic corporation selling identity-altering experiences, and to try on the new, hybrid selves on offer.

While all of the artists in this section speak to universal truths by being “nonhuman,” they nevertheless do so in highly distinct manners reflective of their uniquely individual personalities and perspectives. There are, it seems, as many ways to be “nonhuman” as human.

Masquerade is continually reinventing itself—each performance is an act of innovation.

Even subtle innovations can have radical consequences. Masquerade is a genre that is continually reinventing itself. We have already seen (and will continue to see) new types of masked performances invented by artists in response to the current moment. Yet masks and masked performance can also change gradually—until, as in the case of the Bobo and Senufo masks at the beginning of this exhibition, they appear to have become something altogether new.

Two women, Wura-Natasha Ogunji and Zina Saro-Wiwa, both of Nigerian descent, dominate the next section of the exhibition with their provocative and politically charged reinventions of long-standing historical masquerade genres. Through the use of digital video in particular, both artists invent new ways to extend and expand the participatory nature of masquerade. They also move into traditions previously closed to women, using subtle gestures of experimentation to create masquerades with radically new meanings.

Masks can support the status quo, or try to upend it.

Masks are a rich metaphor for political leadership. They can suggest the suspicion that leaders sometimes present different faces to different people, moderating their performance to suit their audience. Behind the mask, they are depersonalized and removed from a given situation, a step many leaders find essential in making difficult but necessary decisions of life and death. On the other hand, as many street protests have demonstrated, masks are also an effective tool for heightening and extending one’s message, turning a specific critique into a grander drama. You may have already encountered examples of each.

The artists who follow engage primarily in the second vein of political masquerade, offering pointed critiques of a variety of institutions. Gerald Machona challenges governmental corruption in his native land (Zimbabwe) and the disappointments of his adopted homeland (South Africa), while William Villalongo and Brendan Fernandes take on disciplines and institutions like art history and even museums.

These artists push the limits of what masquerade can be by creating works that look towards the future while also reflecting African masquerade’s rich past.

Masquerade is innovation. It responds to new needs, new problems, and new ideas with new dances, new costumes, and new masks. You have already encountered several examples of new types of masquerade created to respond to new needs.

As happens in many masquerade performances, this exhibition closes with a nod to the future. In their respective works, Jakob Dwight and Sam Vernon offer novel ways to think about the very limits of what masks are, and can be. In each of their works, masks are reflected and refracted through their own unique artistic lenses.

While their proposals will not replace the lived traditions of global African masquerade, both artists offer testaments to the enduring creative agency of masquerades. Masks make things happen: they can protect a community, change a person’s status, or inspire an artist to create something new. These artists take us to the limits of the genre and, like traditional masquerade performances, remind us how slippery the lines between future and past can be.