Elegance in an Age of Crisis: Fashions of the 1930s 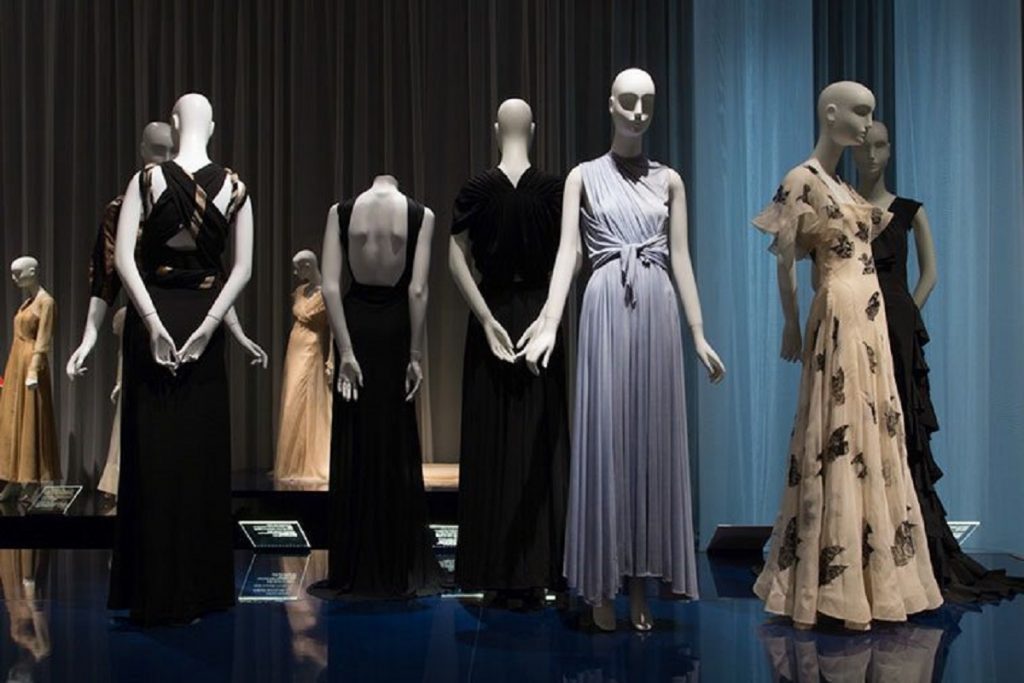 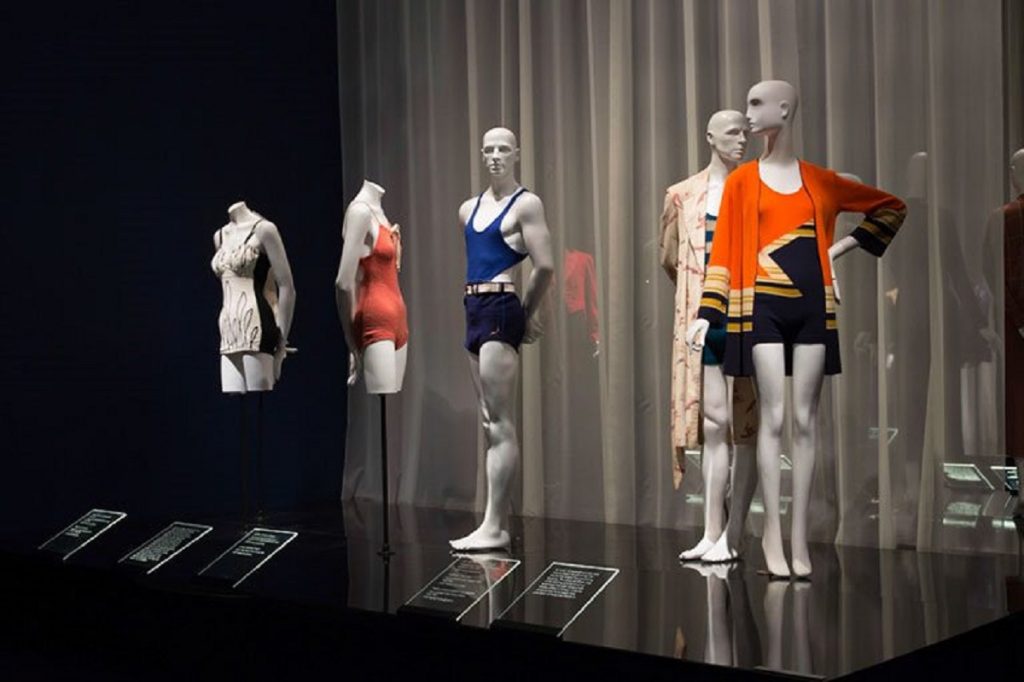 The Museum at the Fashion Institute of Technology (MFIT) presents Elegance in an Age of Crisis: Fashions of the 1930s, an exhibition that celebrates the most innovative and beautifully designed clothing made in the 20th century. This is the first exhibition to concurrently examine both men’s and women’s fashion of the 1930s, specifically objects made by the eras finest dressmakers and men’s clothiers. Haute couture and bespoke tailoring are equally represented by the approximately 80 ensembles and 30 accessories that are arranged thematically in an exhibition environment designed to evoke the restrained style of the era.

The 1930s was a time of grand transformations, when fashion truly began to reflect the streamlined art moderne aesthetic. Garments were softer, minimally ornamented, elegantly proportioned, and markedly different from the preceding periods: the Edwardian era with its stiff, structured clothing, and the shapeless, boxy styles of the 1920s.

Elegance in an Age of Crisis investigates how clothing creators of the 1930s, despite the crippling financial crisis and dire political environment, spearheaded new stylistic ideas and wed them to emerging technologies. Technical innovations in textile production transformed what was possible for couturiers: looms were wider, dyeing vats were larger, and fibers were more tightly twisted. These expansive and flexible new materials gave dressmakers larger canvases upon which to rethink and refine draping techniques, while featherweight textiles lent their garments new suppleness and flexibility. Tailors in both Northern and Southern Europe simultaneously began to deconstruct the jacket and to create a garment that was shapely, yet pliant. Lighter materials, such as linen, were used to make softer jackets.

A synthesis of cutting-edge technology and the finest handcraftsmanship was necessary to forge a truly modern aesthetic in clothing. But these were not the only driving forces of the new look of the 1930s. Artistic influence—mainly the revival and full embrace of classicism across all the plastic arts—spurred a lean, elegantly proportioned aesthetic. It inspired master dressmakers and tailors to experiment with new techniques in order to achieve clothing that enhanced movement and highlighted the natural, well-proportioned, and classically idealized body.

The look of the 1930s was an international phenomenon. Menswear tailoring innovations in London and Naples paralleled breakthroughs in haute couture draping in Paris as well as custom design in New York, Havana, and Shanghai. Hollywood, too, played a role in defining and popularizing the glamorous new look. On view in the exhibition is clothing made in these cities for clients from the United States, Latin America, Europe, and Asia.

The first section of the exhibition displays active wear and resort wear. The burgeoning modern lifestyle brought with it increased leisure time, which necessitated a fresh array of garments. The newfound interest in participatory sports, such as swimming, tennis, golf, and skiing, accompanied a growing consciousness of the body and health. The look and feel of many sports clothes, such as swimwear, underwent profound change in the 1930s due to the creation of new synthetic materials. The softening of the mans suit for sports such as golf can be seen in a tweed ensemble made by Peter Sheppard of Anderson & Sheppard in London.

The second section examines simultaneous developments in men’s tailoring and women’s couture from around the world. On view is clothing—mainly, but not exclusively, daywear—from Naples, London, Paris, New York, and Shanghai. Linen jackets and wool coats on loan from the Rubinacci Museum reveal the revolutionary innovations of legendary Neapolitan tailor Vincenzo Attolini, who worked for Gennaro Rubinacci’s firm, London House, and who was the first to create deconstructed jackets and coats. Also on view are highly original designs for women, such as a bias-cut brown wool tweed coat by Charles James (1936); handmade day dresses and ensembles by couturiers such as Louise Boulanger and Augusta Bernard; and from Shanghai, versions of the silk qipao, a truly new fashion hybrid that blended the body-conscious western silhouette with traditional Chinese design elements.

The third section of the exhibition displays the dramatic and varied formal wear of the decade. The gowns—long, streamlined, and minimally adorned—illustrate a strong connection to classicism. They highlight the natural body and simultaneously sever stylistic and structural connections to the corseted fashions of the early 20th century, as well as to the tubular chemise dress of the 1920s. Featured couturieres include Madeleine Vionnet, Augustabernard, Louiseboulanger, Balenciaga, and Alix, as well as American designers such as Elizabeth Hawes, Valentina, and Claire McCardell. They are presented in groupings that illustrate important trends, such as the predilection for black and white, draping and cutting gowns on the bias, and the use of new and innovative materials, such as silk jersey and silk crepes. Although this exhibition focuses on creators who were artisans and masters of their craft, the work of other important designers (those who were either stylists or illustrators) are also represented. These include Jeanne Lanvin, Coco Chanel, Lucien Lelong, Jean Patou, and Muriel King. The gowns are paired with elegant evening suits for men, made in Naples, London, Vienna, and New York. A highlight of this section is Adrian’s red bugle-beaded dress that Joan Crawford wore in The Bride Wore Red.

In the final section of the main gallery are a silk Charvet robe and a green velvet jacket with exquisitely plush cashmere trousers by Gardner and Wooley (1936), along with the pattern of a jacket that belonged to the Duke of Windsor (likely cut by the legendary Saville Row tailor Frederick Scholte). The exhibition concludes with a woman’s gown and short jacket, made of silk chiffon and constructed with dozens of rows of hand-pleated pin tucks, on view with intimate muslins of period designs.

The exhibition also includes a number of accessories from the 1930s. These hats, handbags, and shoes were fashion essentials in an era of economic crisis, allowing women to parlay a dress—or men a suit—into multiple uses and settings. A highlight is an array of shoes worn by the legendary dancer and movie star Fred Astaire.

Although most of the objects in the exhibition come from The Museum at FIT’s permanent collection, Elegance in an Age of Crisis has been richly enhanced thanks to the generosity of key lenders. They include rare examples of Neapolitan tailoring from the archives of the Rubinacci Museum; a range of period menswear made in Saville Row and collected by contemporary tailors such as Alan Bennett of Davies & Sons, and Steven Hitchcock; and examples of bespoke footwear made by George J. Cleverley, loaned by George Glasgow of G. J. Cleverley. Exquisite haute couture was lent by collector Beverley Birks of New York and fashion editor Hamish Bowles. Patricia Koo Tsien is lending rare qipaos worn by the legendary woman of style Mrs. Wellington Koo.

This exhibition is organized by Patricia Mears, deputy director of The Museum at FIT, and G. Bruce Boyer, leading menswear writer and editor.

The main essays of the book are written by Patricia Mears and G. Bruce Boyer. Each is a historical overview that focuses on the technical and aesthetic developments in women’s high fashion and menswear. The introduction addresses how the evolution of the art moderne style in fashion was influenced by devastating economic and political events, as well as artistic styles, mainly classicism. The essay by Mears, titled The Arc of Modernity: Paris, London, New York, Hollywood, Latin America and Shanghai, and the one by Boyer titled Tailoring the New Man: London, Naples, and Hollywood in the 1930s, view stylistic and technical developments from an international perspective.

The other essays include: Great Chic from Little Details Grows: Women’s Accessories in the 1930s by Colleen Hill; The Wardrobe of the Modern Athlete: Activewear in the 1930s, an overview of sports clothes for both men and women by Ariele Elia; Augustabernard: The Connoisseurs Dressmaker, a case study on a great but nearly forgotten couturiere, by William DeGregorio; and The Qipao and the Female Body in 1930s China by Mei Mei Rado, an essay that documents the dynamic fashion environment in the boom city of Shanghai.

The Museum at FIT
The Museum at FIT, which is accredited by the American Alliance of Museums, is the only museum in New York City dedicated solely to the art of fashion. Best known for its innovative and award-winning exhibitions, the museum has a collection of more than 50,000 garments and accessories dating from the 18th century to the present. Like other fashion museums, such as the Muse de la Mode, the Mode Museum, and the Museo de la Moda, The Museum at FIT collects, conserves, documents, exhibits, and interprets fashion. The museums mission is to advance knowledge of fashion through exhibitions, publications, and public programs. Visit fitnyc.edu/museum.

The museum is part of the Fashion Institute of Technology (FIT), a State University of New York (SUNY) college of art, design, business, and technology that has been at the crossroads of commerce and creativity for nearly 70 years. With programs that blend hands-on practice, a strong grounding in theory, and a broad-based liberal arts foundation, FIT offers career education in more than 45 areas, and grants associate, bachelor’s, and masters degrees. FIT provides students with a complete college experience at an affordable cost, a vibrant campus life in New York City, and industry-relevant preparation for rewarding careers. Visit fitnyc.edu.

The Couture Council is a philanthropic membership group that helps support the exhibitions and programs of The Museum at FIT. The Couture Council Award for Artistry of Fashion is given to a selected designer at a benefit luncheon held every September. For information on the Couture Council, call 212 217.4532 or email couturecouncil@fitnyc.edu.

Exhibition Sponsors
Elegance in an Age of Crisis: Fashions of the 1930s has been made possible in part thanks to the generosity of the New York State Council on the Arts, with the support of Governor Andrew Cuomo and the New York State Legislature. The exhibition is also supported by the Couture Council of The Museum at FIT.