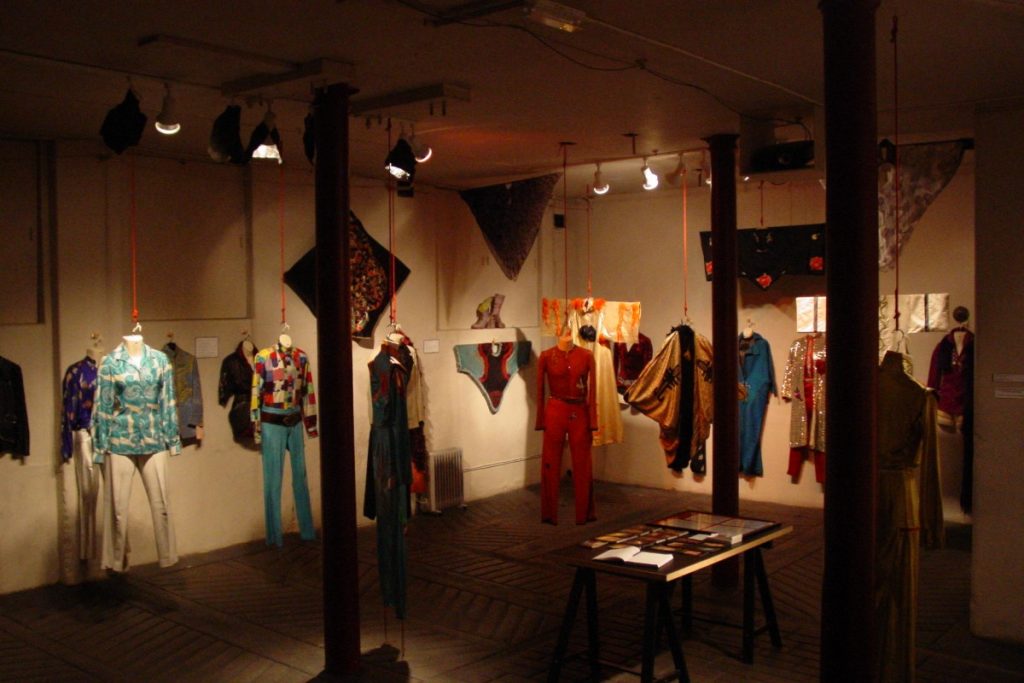 This display of extraordinary garments, offers a mere glimpse into an exclusive world that was a fundamental part of the myth making, which architected our perception of the decadence and sheer opulence of an era populated by beautiful, lip glossed
amazons, flamboyant aristocrats, strung out dandies and St Tropez, golden tan socialites.

The time, care and consideration that Michael Hochong put towards the creation of his incredible wardrobe was a very public declaration and commitment to a lifestyle oversaturated in glamour and fantasy. Every beautiful thing… is a celebration of that
resplendent spirit.

Every beautiful thing…
Michael was born in 1936 in Port of Spain, Trinidad. Being of French Hawaiian and Chinese descent, he was educated in New York, and settled in London at the outset ofthe 60s. He began to circulate in the new swinging London scene, and became renowned as an exuberant and stylish dresser. He had a flair for fashion, design and entertaining and worked in that area for a number of years before opening ‘Michael’s’, an exclusive restaurant in Knightsbridge with his brother Chino in 1969.

The success of his restaurant enabled him to embrace a life of flamboyant excess. Hedeveloped a taste for extravagant costumes and became even more conspicuously dashing and colourful. Rarely seen in the same outfit twice, he lived for elegance and style and making ‘an entrance’ was essential. His sophisticated charm and androgynous, exotic good looks would grant him access to the private playgrounds of the rich and famous, and was regularly seen socializing at the epicenter of high society. He also shared many years of self imposed luxury with the great love of his life John Koon, famed creator of the Chinese take-away and owner of a grand house in Tangiers, a replica of ‘Tara’, Scarlet O’Hara’s spiritual home in ‘Gone with the Wind’.

During the 60s his close friend and celebrated film couturier Germinal Rangel, designed an entire wardrobe of lavish clothes for him, and throughout the 70s Savile Row tailor Fitzgerald Blackman, moonlighting under the label of ‘Fitz’ created many of his most ostentatious costumes. Fitz utilized everything from Crepe de chine to organza, appliqué, panne velvet and rhinestone encrusted lamé, to construct entire ensembles that would rival Aladdin Sane or Liberace.

Most of Michael’s costumes which appear in the exhibition, date from the 60s and 70s and reflect his background, and although one can detect distinct fashion influences of the time, such as Pop Art, Glam Rock, Glitter and Kitsch, it is his own eccentric take on high fashion that makes the costumes so original and exciting; embracing everything from Orientalism to Surrealism, Voodoo, Bespoke tailoring, Haute Couture and Carnival. He was also incredibly proud of his ancestry and would often incorporate ancient oriental robes and exquisite kimonos in his exceptional attire. The clothes themselves are an astounding materialization of Michael’s deep love and obsession with dressing for pleasure.

In February 2011 Michael sadly passed away, leaving this impeccably preserved
collection: a compelling, feathered, sparkling testament to the romance and beauty of his life.