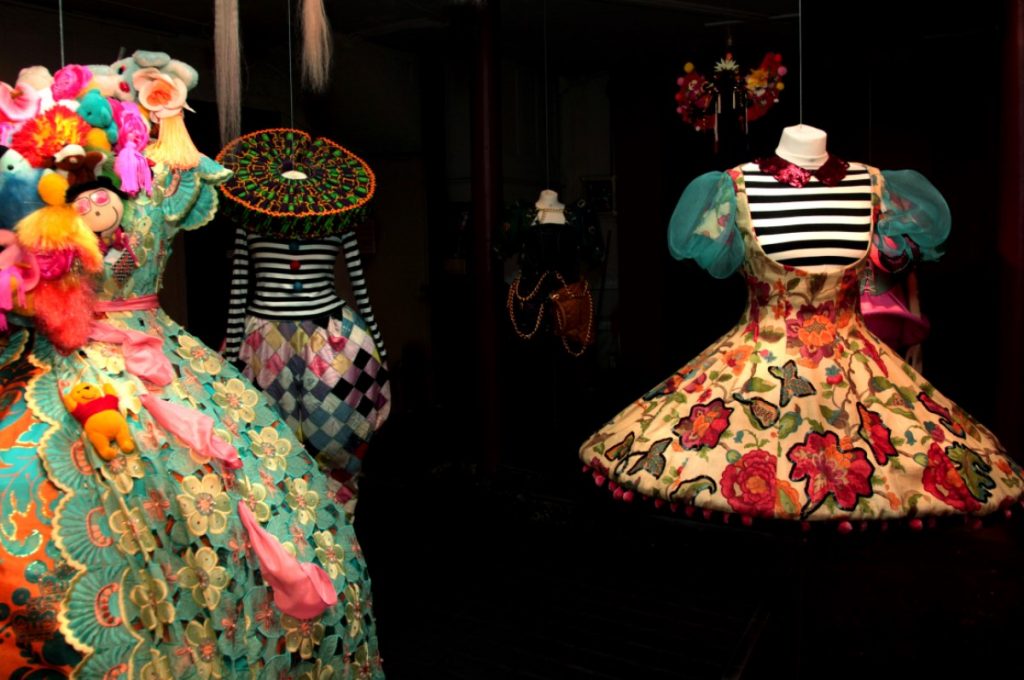 The Chamber of Pop Culture is proud to present…

Forbes’ exotic creations exist in the realms of the fantastical, like costumes for unlikely superheroes from neon mythologies; they hold all the wonderful powers and identities of the characters that inhabit them. Heavily saturated in diverse and conflicting references these visionary creations subvert the iconography of the mundane into exploding, ever evolving, exquisitely made, heightened hybrids projected from the extremities of the imagination.

Consisting of eight collections that explore and appropriate visual themes from religion to warriors via surrealism and futurism, each collection stems from an extensive research process drawing on art history, architecture, ethnic & tribal costumes, fetish wear & fashion bootlegs. Developed over the course of several years in collaboration with internationally acclaimed hair stylist Efi Davies the resulting collections are a testament to a sensitive and empathetic meeting of ideas, conceptually and intuitively delivering an otherworldly, radical aesthetic that lies beyond the realms of high fashion or costume design.

Kate Forbes epitomizes the essence of costume design.  The title does not do the role of costume designer much justice in that the title is very limiting and misleading…since it’s not about costume design, but rather DESIGNING CHARACTER.  Even more so, designers like Forbes who create a framework are in fact architects of ODDYSEYS OF HISTORY that encapsulate an entire character’s dynamic (a synthesis of trajectories that physically exteriorize where they are coming from and where they are going to) within an overall story’s lineage, intrigue and unfolding facts… – Loucaros Eleftheriou

Kate Forbes designs pop couture creations for film, TV, music videos, and the catwalk. With over fifteen years experience in costume design and styling, Kate’s portfolio includes the styling of such artists as MIA, Katie Melua, The Puppini Sisters & Portishead, working with the likes of Chris Cunningham and BAFTA winner Martina Amati. Kate applied her creative approach and diverse influences to television’s ‘Suburban Shootout’ and more recently to the east London setting of Alexis Dos Santos’ critically acclaimed feature ‘Unmade Beds’, as well as highly distinctive styling to the pages of numerous fashion magazines from iD to Italian Vogue and an ever growing number of fine art film commissions.