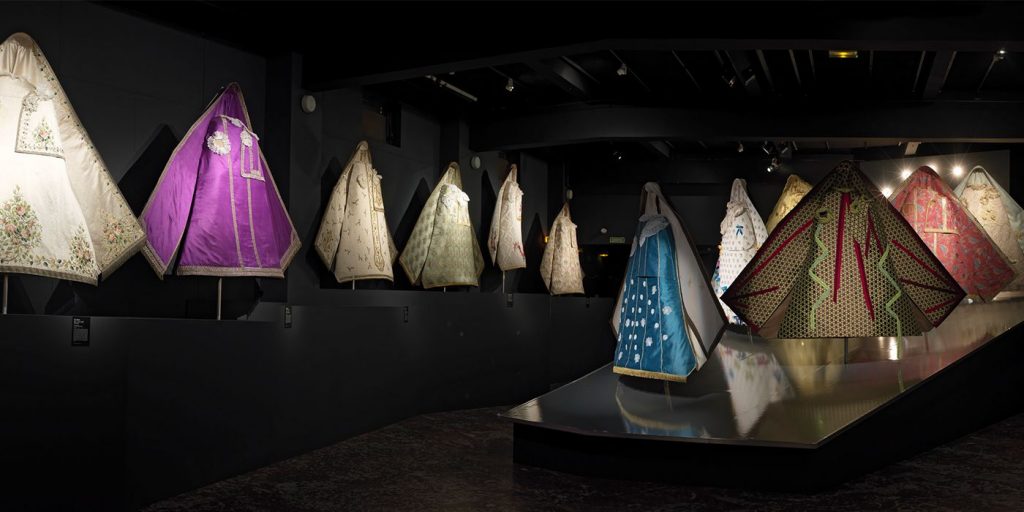 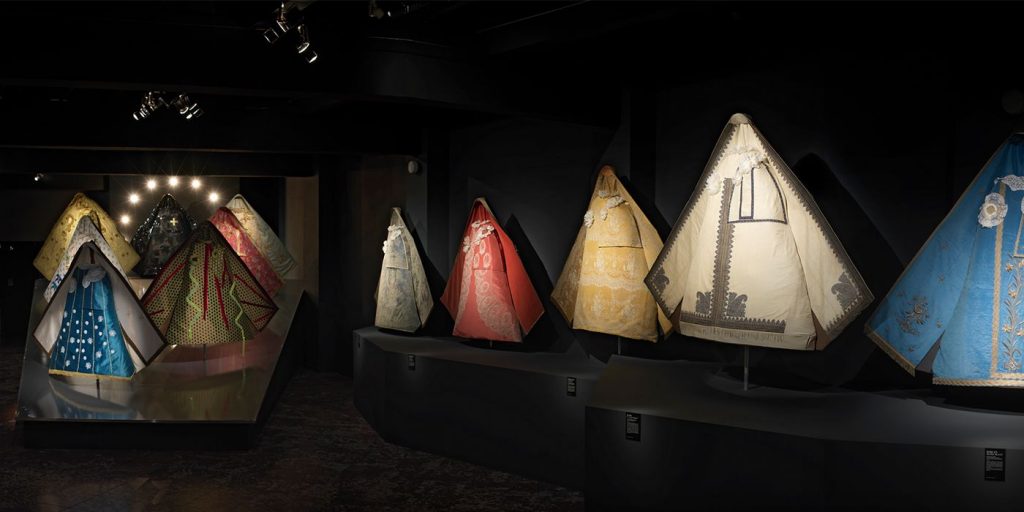 On the occasion of the Icon of Fashion exhibition, the Musée des Tissus unveils a very unexpected history of Fashion. Because the muse of this creation is none other than the Virgin Mary. For nearly six hundred and fifty years, the statues of the Virgin have had a veritable wardrobe, composed of majestic costumes, sparkling with precious stones and pearls, offered by the sovereigns or the simple faithful. Recently, big names in Haute Couture have designed new clothes for a statue of the Black Madonna of Toulouse. Thus, old gold embroidered fabrics and a contemporary camouflage pattern, they respond to each other in a selective conception of costume and body, since only the visible face of the statue is adorned.

At the heart of the Notre-Dame-la-Daurade basilica in Toulouse, a black Madonna, reputed to be miraculous, dominates the altar where her worship is celebrated. The original statue, burned during the Revolution, was replaced at the beginning of the XIX th century by a dark Madonna, carved identically, whose head, right arm and Child, arise amidst sumptuous fabrics.

Because this black Virgin is dressed and has a real wardrobe, changed according to the feasts and the liturgy. The statue is thus covered with a robe, a veil, and an additional robe, in miniature, dresses the Child Jesus. No less than twenty-two dresses, each accompanied by its veil and the robe of Christ, are presented in the exhibition.

In 2009, Haute Couture designers renewed this extraordinary wardrobe and made new outfits for the statue. The Battle Dress by Jean-Charles de Castelbajac, with a camouflage pattern, evokes a strong and protective Virgin, trampling on the serpent of evil, protecting peoples bruised by conflict. The Wedding Feast of Franck Sorbier recalls the sovereign held the XVIII th century: it is canvas silk and son gold, embroidered with metallic lace, beads, tubes and rock glass. The Lenten Dressby Jean-Michel Broc, in woven viscose fabric, uses this artificial fiber from wood, produced from mother earth, evokes the motherhood of the Virgin. It is plum in color, to symbolize mourning and Lent, but velvet ribbons, soft like emerging young shoots, green, announce the renewal.

This Madonna dressed in Haute Couture is no exception. Since the XIV th century, the miraculous statue of the Virgin each had their dressing room, France, Spain, Italy or Germany. The Romanesque Majesties, brown complexion, Gothic Virgin, full of tenderness, articulated and painted statues of the XVII th and XVIII th century were dressed in sumptuous silks, gold and silver embroidered fabrics, embellished with beads and cabochons, lace, offered by sovereigns or by anonymous faithful.

Far from concealing the sculptures, these fake clothes gave the statues a spectacular, almost theatrical, and so human presence. The exhibition presents, in addition to the cloakroom of the Black Madonna of the Sea Bream, other clothes from these wardrobes today little known. Fragile and coveted for the richness of their constituent materials, decried by detractors of an expression of faith deemed too popular, these locker rooms have often been destroyed or have disappeared. The presentation of these dresses of statues of the Virgin at the Tissue Museum is therefore exceptional and allows us to evoke more than six hundred and fifty years of a prestigious creation, reserved for that which was considered by its dressers as the Queen par excellence.