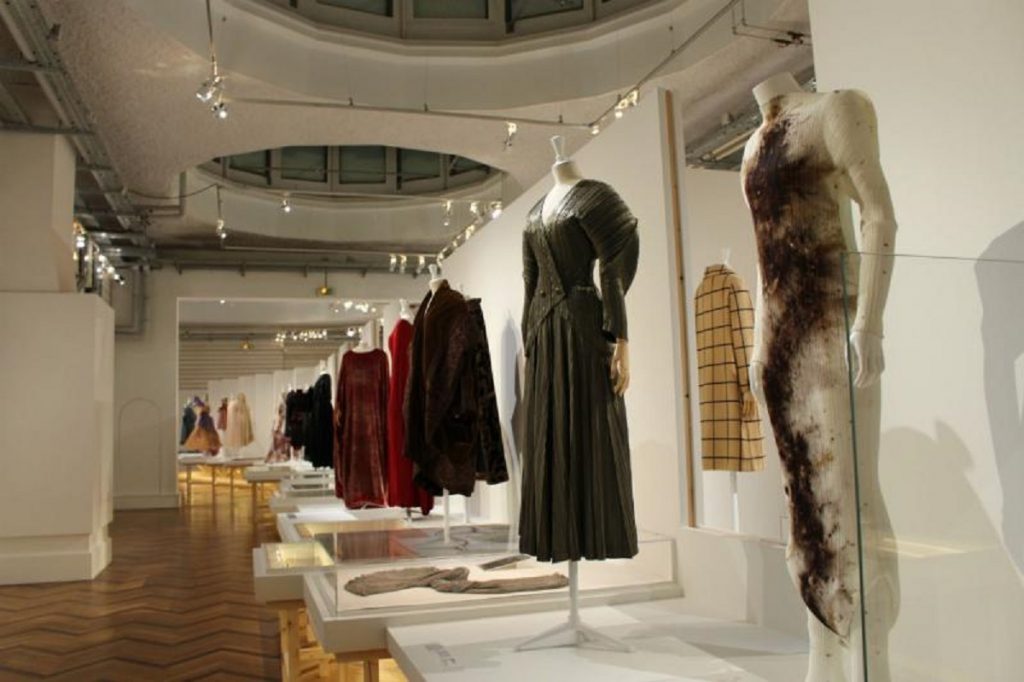 From Charles Frederick Worth to Azzedine Alaïa, from Mariano Fortuny to Issey Miyake and Yohji Yamamoto, or from Cristóbal Balenciaga to Raf Simons… many foreign designers and artistic directors have radically transformed French fashion and richly contributed to its history. The FASHION MIX exhibition is a tribute to French know-how whose prestige Russian, Armenian, Italian, Spanish, Japanese, Belgian designers have helped put on the map.

Mingling personal trajectories with fashion history, FASHION MIX, curated by Olivier Saillard, Director of Palais Galliera, musée de la mode de la Ville de Paris, emphasises the fundamental contribution made by foreign artists to French haute couture and ready-to-wear while presenting an alternative history of immigration, that of men and women, designers and craftsmen who have raised Paris to the status of international fashion capital.

In the fashion industry the concepts of ‘French know-how’ and ‘Made in France’ have been legendary and celebrated the world over since the mid-19th century. However, French fashion has often been the brainchild of foreign designers: pushed into exile for political reasons or emigrating out of artistic choice, attracted not only to the capital of culture and style but also to the country of all freedoms, these designers have been instrumental in establishing the reputation of French haute couture and ready-to-wear as well as that of Paris as world capital of fashion.

But fashion also involves very specific techniques. The exhibition brings to the fore some of the old crafts which are inextricably linked to immigration – Russian embroidery workshops in the 1920s or, more recently, Armenian shoe and shoelace makers. The exhibition displays about one hundred emblematic pieces – dresses, coats, hats, accessories -, selected mainly from the Palais Galliera collections.

Launched in 1858 by a few figureheads like English haute couture founder, Charles Frederick Worth, fashion is today a creative whirlwind of designers coming from all over the planet. More than ever Paris remains one of the great fashion capitals and an essential launchpad for individual careers. With these designers’ most famous creations marking out their own migratory trajectory, the exhibition is articulated around two time continuums that closely reflect this history: one concentrates on those foreigners who first set up fashion houses in Paris, the other on the emergence of a new generation of designers who came from all over the world to present their creations on the French capital’s catwalks.

From the mid-19th Century to the 1960s The arrival in France of foreign designers from the 19th Century and the opening of fashion houses mark the start of a journey focusing on major personalities who uniquely contributed to French creation: Charles Frederick Worth and the English School, Mariano Fortuny and his experiments with textiles, Elsa Schiaparelli and the Italians, Cristóbal Balenciaga and the Spanish School. Contemporary designs by artists such as John Galliano, Phoebe Philo, Alexander McQueen, Sybilla, Popy Moreni and Riccardo Tisci act as counterpoints to those predecessors. This part of the exhibition also dwells on individuals whose fate got embroiled in wider political, cultural upheavals: White Russians in exile after the Revolution (Kitmir and Irfé fashion houses), Spaniards fleeing the Civil War, Armenian refugees (Ara Frenkian).

From the late 1970s to the present day

The abundance of designs, filmed interviews and press articles testifies to the sheer creativity of the following decades. In the late 1970s and early 1980s a radical break occurs with the emergence of the Japanese school: another cycle begins with a new generation of designers ranging from Kenzo and Issey Miyake to Rei Kawakubo for Comme des Garçons, Yohji Yamamoto, Tokio Kumagaï and Junya Watanabe. In the spirit of this Japanese ‘Revolution’, Belgian artists such as Martin Margiela, Ann Demeulemeester, Raf Simons, Dries Van Noten, A.F. Vandevorst, Olivier Theyskens and Jurgi Persoons adopt Paris as their own fashion capital from the 1980s onwards. This second part of the exhibition focuses on the speeding up of exchanges so typical of our modern societies with the quick development of fashion shows and capitals as well as the appearance on the Paris scene of designers of all origins, rather than on a single, geographically determined school. A few of them were indeed to become pivotal in some of the most prestigious French fashion houses, amongst whom Karl Lagerfeld at Chanel, Marc Jacobs at Louis Vuitton or Azzedine Alaïa who set up his own designer label. In the current creative exuberance a more conceptual trend is however noticeable, whose main representatives are Helmut Lang from Austria, Kostas Murkudis from Germany, Viktor & Rolf and Iris van Herpen from the Netherlands, Israeli-American designer Alber Elbaz, Patrick Kelly from the US, Rabih Kayrouz from Lebanon and Manish Arora from India.