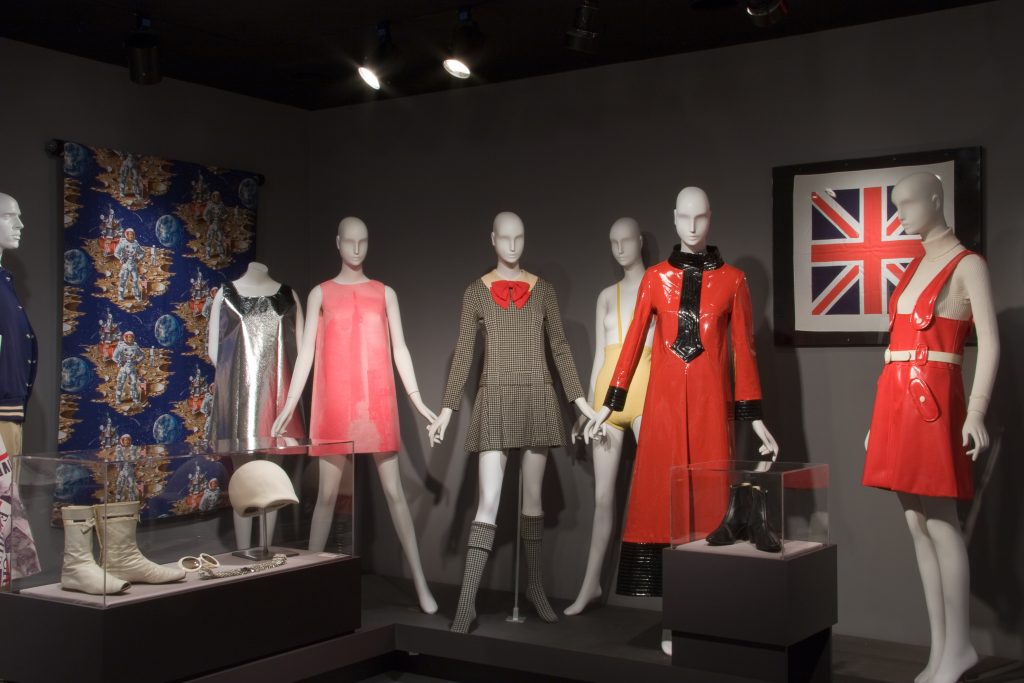 The Museum at FIT presents Fashion & Politics, a new exhibition in its Fashion and Textile History Gallery. Fashion & Politics is an exploration of more than 200 years of politics as expressed through fashion. In this setting, the term “politics” not only refers to the maneuverings of government, but also encompasses cultural change, sexual codes, and social progress. Fashion & Politics displays how, throughout history, fashion has been a medium for conveying political ideologies and related social values by addressing such important themes as nationalism, feminism, and ethnic identity, as well as significant events and subcultural movements. Featuring more than 100 costumes, textiles, and accessories displayed in chronological order, Fashion & Politics reveals the rich history of politics in fashion.

The exhibition’s introductory gallery explores the theme of American nationalism. Featured are a woman’s costume, circa 1889, printed with an American flag motif, as well as Catherine Malandrino’s iconic Flag Dress, worn by numerous celebrities and socialites to express patriotism after 9/11, and again in response to the historic 2008 presidential campaign. Also featured is an ”IKE” dress from the 1956 Eisenhower campaign, a ”NIXON” paper dress, and memorabilia from the 2008 presidential campaigns.

Following the introduction, the exhibition presents an overview of fashion and related textiles and accessories that illustrates the interrelationship of fashion and politics from the nineteenth century to the present day. This begins with a look at the role of fashion in nineteenth century cultural and class politics. For example, a neo-classically inspired gown, circa 1805, conveys democratic ideals through the medium of fashion. Also on view are examples of late nineteenth century women’s sportswear, including a tailored bicycling ensemble and gym suit, which were inspired by earlier styles of reform dress such as the divided skirt and the bloomer.

Late nineteenth and early twentieth century ”Aesthetic” dress—a form of early countercultural style—rejected the rigid silhouette of Victorian fashions in favor of looser-fitting garments. Examples of this are shown in designs by Liberty of London and Mariano Fortuny that emphasize health, comfort, and a graceful appearance.

Also featured is a series of textiles that chronicle the social and political developments of the first half of the twentieth century. These include a Communist propaganda textile from 1920s Russia, an anti-Prohibition scarf repeating the words ”Repeal the 18th Amendment,” and a depression-era textile entitled Harvest (from one of FDR’s New Deal programs).

The chronology continues with visual representations of patriotism during World War II, which are represented by objects that range from a pair of red, white, and blue leather heels adorned with metal stars to a triumphant ”Victory” scarf. A denim “Rosie the Riveter” factory jumpsuit is on view as an example of the functional work wear women adopted while contributing to the war effort. In contrast, women who enlisted in the W.A.V.E.S. division of the U.S. Navy were outfitted in uniforms by American couturier Mainbocher, a designer of the highest caliber.

The post-World War II baby-boom generation came of age in the 1960s a decade of youth, technology, space exploration, and burgeoning sexual revolution. Capturing the mood of the era were designers such as Pierre Cardin, Andre Courrèges, and Rudi Gernreich, all of whom have garments on display. Gernreich once stated that his designs were both fashion and social commentary—none more so than his famous topless bathing suit, the “Monokini,” which is featured in the exhibition.

As it moves into the second half of the twentieth century, the exhibition shows that the use of political and social imagery was becoming increasingly explicit in fashion. On display are examples from Vivienne Tams controversial 1995 “Mao” Collection, which used a highly charged propagandist image: the face of Communist leader Mao Zedongto comment on Chinese political history. Set against a camouflage background, Stephen Sprouse’s subversive homage to the Declaration of Independence alludes to the complex relationship between government and the military.

Present-day fashions reflect a renewed interest in politics, sparked in large part by the election of Barack Obama, the United States’ first African-American president. Just as Obama’s campaign centered on such socially charged words as “progress” and “change,” many contemporary designers are currently using fashion as a medium for raising political and social awareness and promoting environmentalism. The Danish fashion brand NOIR works with sustainable materials and fair-trade practices to blend luxury and sophistication with social responsibility. On another note, dresses from Alexandre Herchcovitch’s spring 2009 collection entitled “Army of Love” were inspired by “politically troubled, foreign-ruled, war-torn countries.” These examples are among the many ways that fashion continues to powerfully articulate our concerns about social issues such as war, global warming, and economic uncertainty.

Fashion & Politics is organized by Melissa Marra and Jennifer Farley, along with Colleen Hill, Harumi Hotta, and Lynn Weidner. The exhibition will be on view from July 7, 2009 through November 7, 2009 in the Fashion and Textile History Gallery at The Museum at FIT.