Fashioning Masculinities: the Art of Menswear 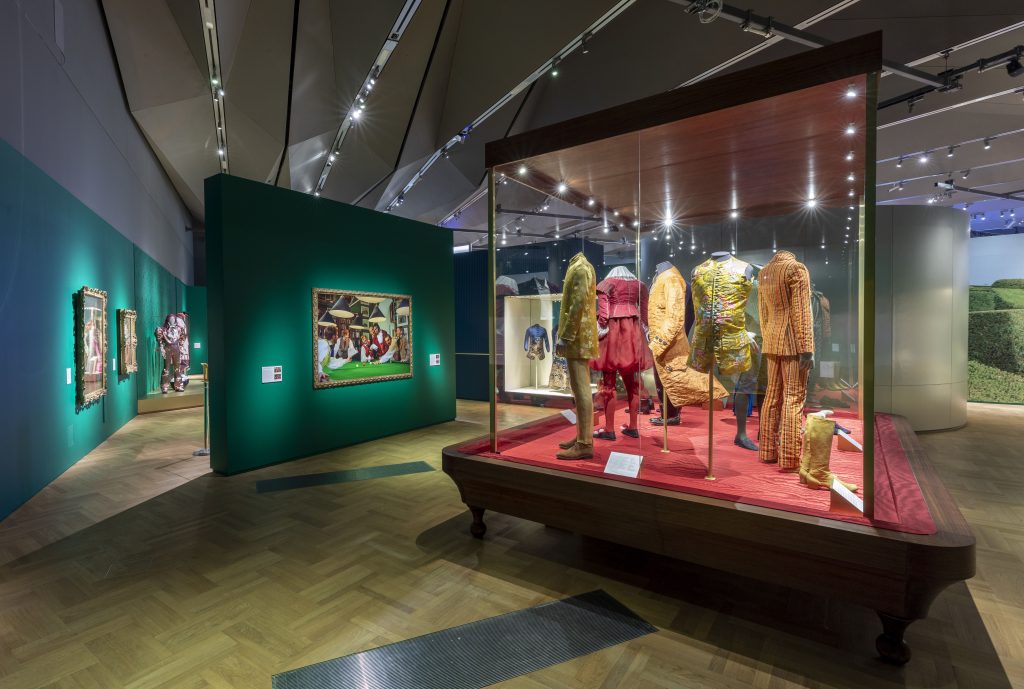 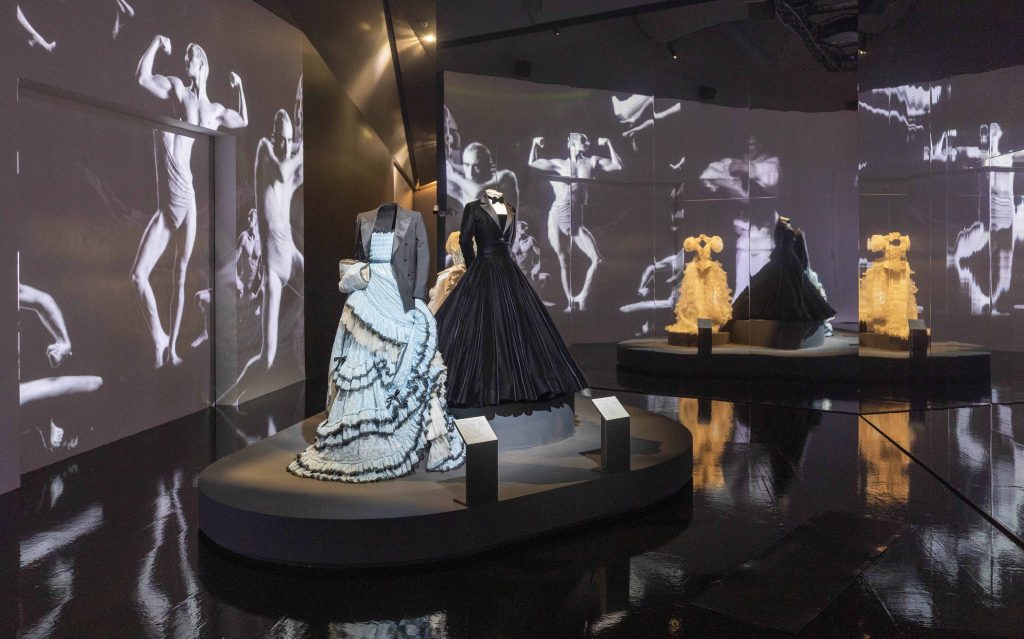 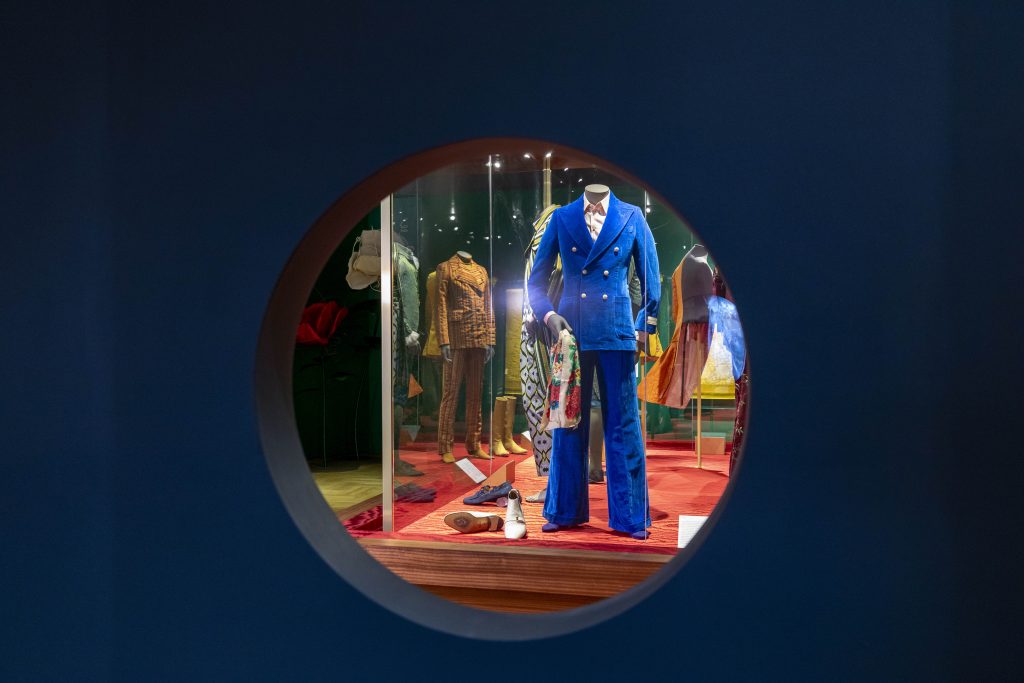 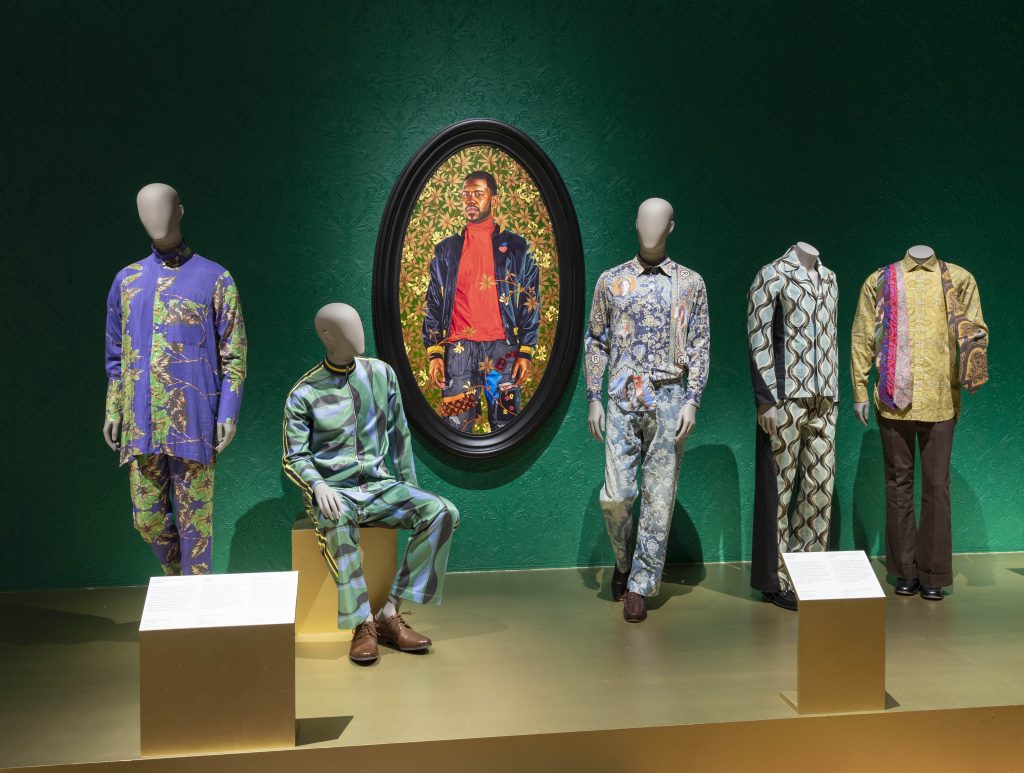 Fashioning Masculinities: The Art of Menswear is the first major V&A exhibition to celebrate the power, artistry and diversity of masculine attire and appearance. The show traces how menswear has been fashioned and refashioned over the centuries, and how designers, tailors and artists – and their clients and sitters – have constructed and performed masculinity, and unpicked it at the seams.

The three gowns and the icons who wore them sparked viral moments, bringing visibility to a reimagined future for gendered dress. Billy Porter’s tuxedo gown by Christian Siriano created a sensation on the Oscars red carpet in 2019. In 2020, an Alessandro Michele for Gucci custom gown and tailored jacket was worn by Harry Styles as the first solo male cover star of US Vogue. In 2021, Bimini Bon Boulash wore a wedding dress by Ella Lynch for the season 2 finale of Ru Paul’s Drag Race UK. All three ensembles are on display in a UK museum for the first time.

Joining the gowns in the finale is a dynamic and celebratory film directed, animated, and illustrated by Quentin Jones. Produced by Cadence Films, it is a culmination of the themes explored in the exhibition – featuring dancing figures projected across a 5-metre-high by 12-metre-wide curved wall.

Also announced today – and on display for the first time ever – is the sequinned Haider Ackermann suit worn by Timothée Chalamet to the Dune premiere at the Venice Film Festival.
The exhibition Fashioning Masculinities: The Art of Menswear presents around 100 looks and 100 artworks, displayed thematically across three galleries and the finale. Contemporary looks by legendary designers and rising stars are displayed alongside historical treasures from the V&A’s collections and landmark loans: classical sculptures, Renaissance paintings, iconic photographs, and powerful film and performance. From looks by Gucci, Harris Reed, Grace Wales Bonner and Raf Simons, to paintings by Sofonisba Anguissola, Kehinde Wiley and Joshua Reynolds, contemporary artworks by Robert Longo, Omar Victor Diop and Yinka Shonibare CBE, to an extract from an all-male dance performance by Matthew Bourne’s New Adventures, the exhibition showcases the variety of possible masculinities across the centuries from the Renaissance to the global contemporary. Outfits worn by familiar faces are interspersed throughout, from Timothée Chalamet and Sam Smith, to David Bowie and Marlene Dietrich. Innovative creations and diverse representations highlight and celebrate the multiplicities of masculine sartorial self-expression, dressing beyond the binary.

Claire Wilcox and Rosalind McKever, co-curators of Fashioning Masculinities: The Art of Menswear, said: “Masculine fashion is enjoying a period of unprecedented creativity. It has long been a powerful mechanism for encouraging conformity or expressing individuality. Rather than a linear or definitive history, this is a journey across time and gender. The exhibition brings together historical and contemporary looks with art that reveals how masculinity has been performed. This is a celebration of the masculine wardrobe, and everyone is invited to join in.”

Fashioning Masculinities opens with a Craig Green SS2021 ensemble of a deconstructed suit, alluding to the construction and deconstruction of both the masculine body and conventions of masculinity, a theme that is central throughout the show. The three main galleries –

Undressed, Overdressed, and Redressed – follow, culminating with the finale, Dressed. The exhibition design is by JA Projects. Undressed explores the male body and underwear in a utopian dreamscape, whilst Overdressed takes visitors into the elite masculine wardrobe in a sumptuous, immersive space with courtly grandeur, featuring oversized silhouettes, abundant colour, and lavish materials. The third section, Redressed, explores the construction and dissolution of the suit, with the exhibition design conveying the idea of an urban reawakening.

About the Exhibition: Undressed explores the male body and underwear, looking at how classical European ideals of masculinity have been perpetuated and challenged over the centuries. Plaster casts of the Apollo Belvedere and the Farnese Hermes – which highlight a tradition of depicting idealised male bodies draped in textiles that reveal more than they conceal – are juxtaposed with modern and contemporary representations of the body, from prints and photography by David Hockney, Lionel Wendt, Zanele Muholi, Del LaGrace Volcano and Isaac Julien, to a Calvin Klein advertisement.

Also on display is a film of Matthew Bourne’s Spitfire (1988) performed by New Adventures dancers, which takes place in the world of men’s underwear advertising and mail order catalogue photography, whilst contemporary ensembles, by Ludovic de Saint Sernin, and Virgil Abloh for Off White, highlight how designers are appropriating sheer fabrics to create ensembles, alluding to a new honesty about menswear. Fashion’s fascination with the body has seen it support changing masculine ideals, from evoking classical drapery with Giorgio Armani, to sculpting flesh, as seen in garments by Jean-Paul Gaultier and A-COLD-WALL*, to celebrating body diversity. This is exemplified in the exhibition by excerpts of Arrested Movement by Anthony Patrick Manieri, an inclusive portrait series and awareness initiative celebrating and promoting positive body image.

Undressed ends with Auguste Rodin’s Age of Bronze sculpture, and Tiresias, a performance by Cassils, in which the artist melts a neoclassical torso carved in ice with their body heat.
The second gallery, Overdressed, explores the elite masculine wardrobe, epitomised by oversized silhouettes, lavish materials like silks and velvet in daring colours, and symbolic patterns to express status, wealth and individuality. Drawing synergies across the centuries, the section features armoured breastplates to silky smoking suits, sweeping capes to ribbons and lace, including Grinling Gibbons’ wooden carving imitating a Venetian needlepoint lace cravat, displayed alongside real lace, and a Dolce & Gabbana cape juxtaposed with a Sofonisba Anguissola painting. The section also includes grooming, with makeup and shaving equipment.

Historically, menswear was full of pattern and colour. In the exhibition a rainbow of garments are displayed on a billiards table, from a 17th-century red doublet and a yellow 1960s jacket from Carnaby Street, through to a bright blue Alessandro Michele for Gucci suit, worn by Harry Styles.

A section on scarlet and pink highlights the return of this masculine colour to popularity. Aristocratic sitters in oil paintings by Joshua Reynolds and Jean-Baptiste Perronneau are displayed alongside pink ensembles by Harris Reed and Grace Wales Bonner among others. Nearby, a custom Randi Rahm ensemble – a suit and full-length embroidered cloak with a hot pink lining – worn by Billy Porter at the Golden Globes in 2019, complements the selection.

Internationally traded textiles, imported silks and floral patterns, reflect their wearers relationship to the world. Through the lens of contemporary fashion, from Alessandro Michele for Gucci and Kim Jones for Fendi to Rahemur Rahman, Ahluwalia and Orange Culture, Overdressed shows how historic ideas begin to shift, with a full rainbow of masculine outfits on display.

The third gallery, Redressed, pieces together the modern masculine uniform of the suit, from Beau Brummell to the contemporary runway. Redressed opens with a reflection on English country tailoring and the origins of the suit – with historic garments from the V&A collection shown alongside contemporary reimaginings, including a kilt by Nicholas Daley – before exploring how military attire influenced civilian dress.

In the twentieth century an abundance of mass-produced suits bred creativity as Mods, Teddy Boys and all manner of subcultures looked to define their styles through tailoring, explored in the exhibition through garments and photography. A section on leather shows how designers like Tom Ford for Gucci, Hedi Slimane for Dior and Donatella Versace took their interest in leather to a new place, whilst a series of frock coats from the mid-nineteenth century to the present day includes examples by Prada, Alexander McQueen and Raf Simons. Redressed also includes paintings as well as extensive photography showing changing styles and attitudes, from Oscar Wilde, Claude Cahun and Cecil Beaton to The Beatles and Sam Smith. Robert Longo’s 1981 drawing from the series Men in the Cities introduces the final part of the section about the dissolving of the suit. A new wave of fashion designers from Rick Owens to JW Anderson to Comme des Garçons to Lesiba Mabitsela are slashing away at conventions, both for menswear, and masculinity.