Frida Kahlo: Appearances Can Be Deceiving 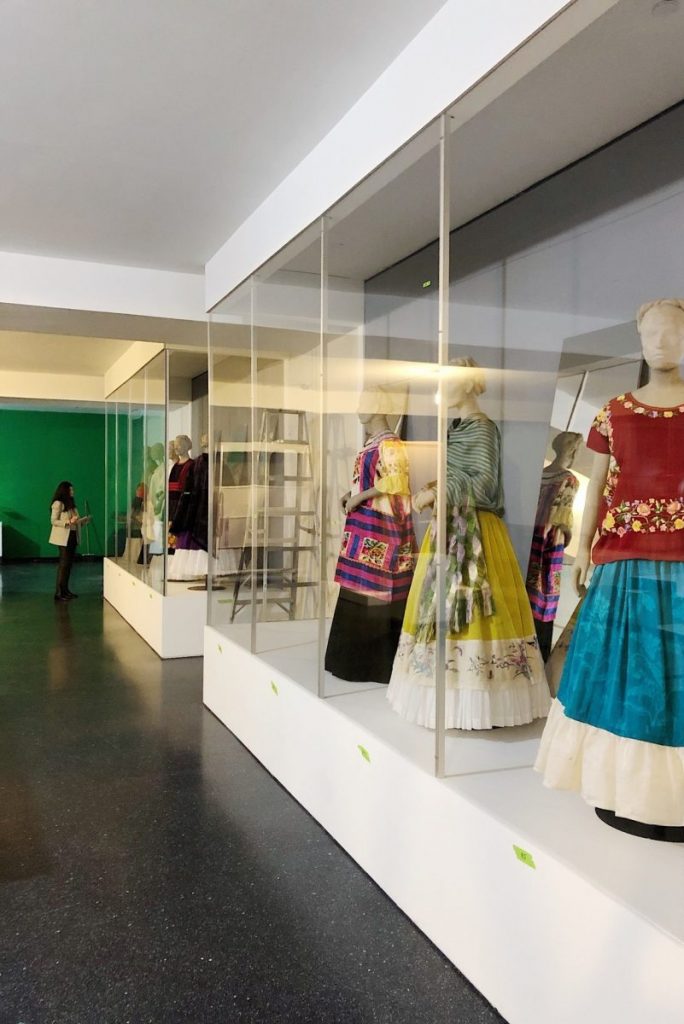 Frida Kahlo: Appearances Can Be Deceiving is the largest U.S. exhibition in ten years devoted to Frida Kahlo, and the first in the United States to display a collection of her personal possessions from the Casa Azul (Blue House), the artist’s lifelong home in Mexico City. The objects, ranging from clothing, jewelry, and cosmetics to letters and orthopedic corsets, will be presented alongside works by Kahlo—including ten key paintings and a selection of drawings—as well as photographs of the artist, all from the celebrated Jacques and Natasha Gelman Collection. Related historical film and ephemera, as well as objects from the Brooklyn Museum’s extensive holdings of Mesoamerican art, are also included. Offering an intimate glimpse into the artist’s life, Appearances Can Be Deceiving explores how politics, gender, clothing, national identities, and disability played a part in defining Kahlo’s self-presentation in her work and life.

On view from February 8 to May 12, 2019, Frida Kahlo: Appearances Can Be Deceiving is organized by Catherine Morris, Sackler Senior Curator for the Elizabeth A. Sackler Center for Feminist Art, and Lisa Small, Senior Curator, European Art, Brooklyn Museum, and is based on an exhibition at the V&A London. The Brooklyn exhibition is organized in collaboration with the Banco de México Diego Rivera and Frida Kahlo Museums Trust, and The Jacques and Natasha Gelman Collection of 20th Century Mexican Art and The Vergel Foundation.

After Kahlo’s death in 1954, her husband, muralist Diego Rivera, instructed that their personal belongings be locked away at the Blue House, not to be touched until 15 years after Rivera’s death. In 2004, these items were unearthed and inventoried. Making their U.S. debut are more than one hundred of Kahlo’s personal artifacts ranging from noteworthy examples of her iconic Tehuana clothing, contemporary and Mesoamerican jewelry, and some of the many hand-painted corsets and prosthetics used by the artist during her lifetime. Shedding new light on one of the most popular artists of the twentieth century, these objects illustrate how Kahlo crafted her appearance, and shaped her personal and public identity to reflect her cultural heritage and political beliefs while also addressing and incorporating her physical disabilities.

Paintings on view include iconic works such as Self-Portrait with Necklace (1933), Self-Portrait with Braid (1941), and Self-Portrait as a Tehuana, Diego on My Mind (1943), which depicts Kahlo in traditional Tehuana clothing and an elaborate headdress with a miniature portrait of Diego placed squarely above her iconic brow. In addition, the exhibition will feature photographs of Kahlo, including childhood portraits taken by her father, the photographer Guillermo Kahlo; images of the artist and her husband; and intimate studies by many renowned photographers of the period, including Manuel Álvarez Bravo, Lola Álvarez Bravo, Gisèle Freund, Nickolas Muray, and Edward Weston.

To highlight the collecting interests of Kahlo and Rivera, works from the Brooklyn Museum’s Arts of the Americas collection will be featured, including ancient West Mexican ceramics such as a Colima dog sculpture and a pair of Nayarit male and female figures, Aztec sculptures of the Maize Goddess and the Wind God, and early twentieth-century pottery from the ceramic center of Tonalá in Guadalajara, Mexico. The ancient Colima dogs were of particular interest to Kahlo because they depict the Mexican hairless dogs (Xoloitzcuintli) that she loved.

“We are absolutely thrilled to feature such an iconic and globally recognized artist in one of her largest exhibitions in New York City to date. Focused on the life and work of Frida Kahlo, the show comes at an important time, when it is critical to build cultural bridges between the United States and Mexico,” says Anne Pasternak, Shelby White and Leon Levy Director, Brooklyn Museum.

Catherine Morris, Sackler Senior Curator, Brooklyn Museum, says, “Under-recognized in her lifetime, Kahlo has become a feminist icon over the past four decades. The prevailing narrative that women are too often defined by their clothes, their appearance, and their beauty was powerfully co-opted by Kahlo through the empowering and intentional choices she made to craft her own identity. The exhibition is titled after a drawing by Kahlo, in which she makes visible the disability that her striking Tehuana skirts and blouses covered. The show expands our understanding of Kahlo by revealing the unique power behind the ways she presented herself in the world and depicted herself in her art.”

Lisa Small, Senior Curator, Brooklyn Museum, adds, “After our recent Georgia O’Keeffe exhibition, which revealed how that artist’s wardrobe was a carefully considered sign of modernity, it is truly exciting to present this exploration of Frida Kahlo, perhaps the only other artist whose sartorial choices were not only deliberately connected to her personal identity and artistic practice, but also launched her status as an enduring cultural icon.”

The exhibition at the Brooklyn Museum explores Kahlo’s experiences in the United States, and New York City in particular. During this influential time in the artist’s life, she solidified her political allegiances and launched her public career as an artist. In 1931, Kahlo traveled to New York with Rivera, whom she had married in 1929. Rivera had been commissioned to paint a mural at Rockefeller Center, a project from which he was famously fired in 1934 for including an image of Vladimir Lenin, the communist revolutionary and leader of the Soviet Union. As a result of these events, and the significant class disparities she saw first -hand in the United States, Kahlo, who was an active member of the communist party, reaffirmed her political beliefs and was inspired to frame her clothing as overtly political, nationalistic, and in support of the Mexican Revolution. In 1938, the surrealist poet André Breton arranged the artist’s first gallery show in New York, at the influential Julien Levy Gallery. A critical success, her first and only show in New York City launched Kahlo’s career internationally. An iconic color portrait of the artist taken by photographer Nickolas Muray atop a Greenwich Village building in 1939 documents this period in New York.

In her personal life, Kahlo came to define herself through her ethnicity, disability, and politics, all of which were at the heart of her work as an artist. Born to a German-Hungarian father and a half-Spanish, half-indigenous Tehuana mother, Kahlo’s carefully orchestrated personal style made a bold statement about cultural identity, nationalism, and gender. In the years following the Mexican Revolution (1910–20), the celebration of regional diversity became a symbol of national pride. By 1930, Kahlo had famously adopted the traditional colorful dress of the Tehuana region, a matriarchal society in Oaxaca, Mexico, which Kahlo revered for the beauty of its culture and the power it entrusted to women. The Tehuana women’s floor-length skirts, billowing blouses, and elaborate headwear became Kahlo’s sartorial signature, and served as a way to reaffirm her political beliefs and pride in Mexican culture, particularly in the 1930s as her politics became more radicalized. The Brooklyn Museum presentation will feature a selection of ensembles from the artist’s wardrobe, many of which she acquired from indigenous vendors in the markets of Mexico City.

Kahlo’s choice of clothing, though a purposeful statement of her politics, must also be understood in relationship to her well-documented disabilities. At eighteen, after recovering from a childhood case of polio that left one of her legs permanently weakened, Kahlo was in a horrific bus accident that left her with lifelong injuries, including a severely broken spine. Enduring more than thirty operations during her lifetime, Kahlo convalesced at the Blue House and in hospitals on and off for decades. The traditional Tehuana clothing Kahlo adopted allowed the artist to control how people saw her, while simultaneously accommodating her physical disabilities under long skirts and loose-fitting blouses. These same disabilities were a significant aspect explored in her artwork. Included in the exhibition is the arresting color drawing, which bears the titular text “Las apariencias engañan” (Appearances can be deceiving). In the self-portrait, Kahlo’s fractured body, typically hidden beneath her clothing, is visible via a transparent blouse and skirt.