The Jazz Age: American Style in the 1920s 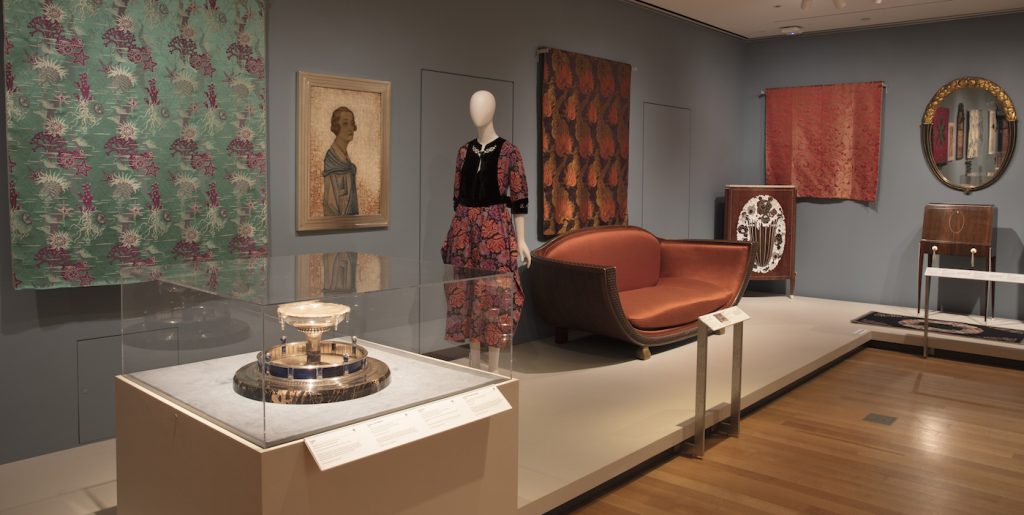 A creative explosion in design and art lit up the 1920s. The Jazz Age explores the dynamic changes in American taste and lifestyles during this period through a broad range of furniture, jewelry, fashion, textiles, decorative arts, and architecture, as well as art, film, and music. The influences that fueled this burst of innovation, exoticism, and modernity were manifold and flowed back and forth across the Atlantic. Jazz music, a uniquely American art form that sprang from African American musicians who preserved and improvised on its historic roots, also found a ready audience in Europe. An apt metaphor for the era’s embrace of urbanity and experimentation, jazz captured the pulse and rich mixture of cultures and rhythms that brought a new beat to contemporary life. Significant influences from Europe included avant-garde artistic movements; the Paris 1925 Exposition Internationale des Arts décoratifs et industriels modernes; recent immigrant designers, primarily from Austria and Germany; traveling exhibitions featuring the latest designs, many available for sale; and fashion and jewelry acquired overseas. At home, new modes of transportation and the development of industrial design with its impact on consumer products and the interior profoundly shaped American taste. Equally exciting and important as these influences were the rapid growth of American cities and architecture—most notably the soaring American skyscraper—which awed Americans and Europeans alike and inspired unprecedented dynamic forms in design. New freedoms abounded. Women gained the right to vote in 1920 and enjoyed more independence, bending traditional social rules of decorum and engaging in new professions such as interior design. This freer spirit also appeared in art and design through vibrant colors, bold geometric forms, and the use of new materials and experimental production methods. These changes became increasingly visible as the decade progressed and are explored in the exhibition’s six thematic sections: The Persistence of Traditional “Good Taste,” A New Look for Familiar Forms, Bending the Rules, A Smaller World, Abstraction and Reinvention, and Toward a Machine Age.