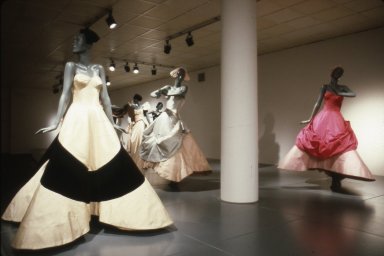 “The Genius of Charles James” is a retrospective exhibition of over 50 creations by one of America’s foremost couturiers of the 1930’s, 40’s, and 50’s.

The nucleus of the exhibition is provided by The Brooklyn Museum’s own James collection, the richest in the world. Additional garments and accessories have been drawn from an international array of patrons, individual collectors and institutions. James attracted to his salons such diverse clients as Millicent Rogers, Elizabeth Arden, Mrs. Cornelius Vanderbilt Whitney, Dame Alicia Markova, Gypsy Rose Lee, Mrs. John de Menil, Jennifer Jones, Elsa Peretti, Lee Krasner, Mrs. Vincent Astor, Irene Castle, Mme. Salvador Dali, Doris Duke, Toni Frissell and Mrs. Harrison Williams. His most productive years spanned the 1930’s through the 1950’s. To be fitted for a Charles James gown was not merely to be measured; it was to be educated in how to walk, sit or dance in harmony with the garment. The garments will be displayed on special mannequins so that the clarity of line and visual honesty that were James’ trademark will be unmistakable.

To accompany the exhibition the Museum will publish “The Genius of Charles James”, a 176 page book with 422 illustrations, 25 of which are in color.

The book, by The Brooklyn Museum’s curator of Costumes and Textiles, Elizabeth Ann Coleman, will include memoirs of James’ life and working habits complemented by essays by his friends and clients Bill Cunningham, Mrs. William Randolph Hearst, Jr. and Anne, Countess of Rosse. This catalog-raisonne of James’ work will document over 600 designs created during his 45-year career. This is the first effort of its kind, and one which should serve as a prototype for future studies of the art of couture.

This exhibition was made possible with the aid of grants from The William Randolph Hearst Foundation, and The National Endowment for the Arts in Washington, D.C., a Federal agency.