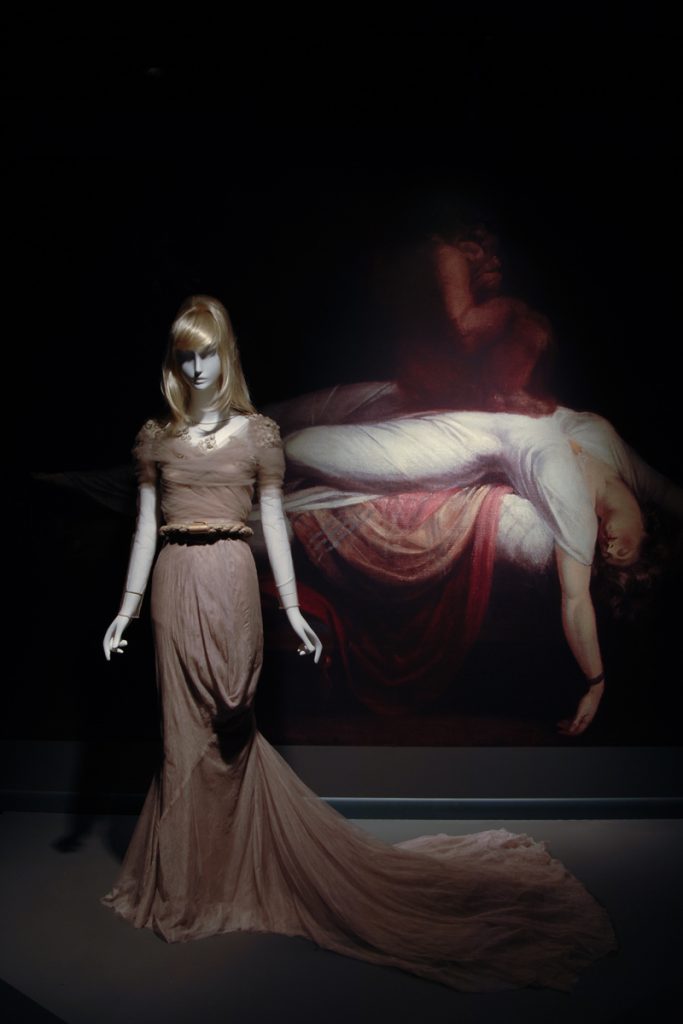 Also on display was a range of subcultural styles, such as old-school goth (associated with the heyday of the goth subculture, 1979-83), Victorian-style goth, industrial, steam punk, and cyber-goth, by designers such as Kambriel, Morphius and Plastik Wrap, as well as Japanese Elegant Gothic Lolitas by Tokyo-based brands Moi-Mme-Moit and h.Naoto Blood.
“Gothic” is an epithet that evokes images of death, destruction, and decay.  Not simply a word that describes something, such as a Gothic cathedral, it is almost always a term of abuse that implies the dark, barbarous, and gloomy.  Such negative connotations have made the gothic an ideal symbol of rebellion for a wide range of cultural outsiders.  From its origins in 18th century gothic literature of terror to its contemporary manifestations in vampire literature and cinema, the gothic has embraced the powers of horror and the erotic macabre.  Throughout its history, fashion has been central to our vision of the gothic.
“Although popularly identified with black-clad teenagers and rock musicians, the gothic has also been an important theme in contemporary fashion,” said Dr. Valerie Steele, director of The Museum at FIT and curator of this exhibition. “The imagery of death and decay, the power of horror, and the erotic macabre are perversely attractive to many designers. For example, John Galliano told me that he saw the ‘Gothic girl’ as ‘edgy and cool, vampy and mysterious,’ while the most recent Rodarte collection was inspired by Japanese horror films.”
An introductory gallery traced the development of gothic style from its origins in the eighteenth-century gothic literature of terror to its contemporary manifestations in art, fashion, and film. The Victorian cult of mourning, for example, was illustrated by actual mourning dresses, crepe veils, and momento mori jewelry. A Cabinet of Curiosities featured objects such as a wax head and the death mask of a poet. The vampire vignette included one of Eiko Ishioka’s costumes for the film Bram Stokers Dracula.  A selection of photographs was also be on display.
Simon Costin, the British artist, jeweler, and set designer who has worked on many fashion shows, served as art director for Gothic: Dark Glamour. Costin worked closely with exhibition designer Charles B. Froom to create an appropriately gothic mise-en-scene. The main gallery space was designed as a labyrinth, divided into iconic spaces such as Night, with seductive black evening dresses; the Ruined Castle, which conveys a sense of the Dark Ages; and the Laboratory, with futuristic fashion “monsters.”  Towering in the background was the Haunted Palace, which evokes Edgar Allan Poe’s architectural metaphor for a disturbed mind.
Image courtesy of The Museum at FIT