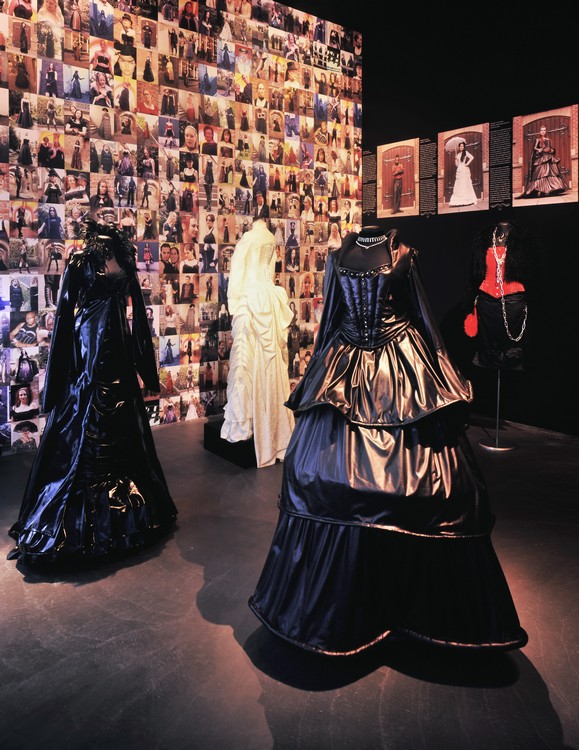 From 27 September to 13 December 2003, the exhibition Gothic Wear was on view in the Centraal Museum. The exhibition showed photos of representatives of gothic culture, along with six different gothic outfits. The exhibition provided a picture of current fashion developments in the Dutch gothic scene.

Centraal Museum goes Gothic
Gothic, which emerged from punk culture in the 1980s, has led to a wide variety of ‘gothic’ styles. The most famous gothic costume consists of the Victorian long dresses, with lots of lace and ruffles, and white powdered faces with black-rimmed eyes. Modern goths also use neon colors called cybergoths, or black patent leather clothing. Almost all goths’ clothing is homemade, which means that many examples of clever handiwork in embroidery, lacework and cut can be found.

Gothic in the picture
The exhibition Gothic Wear, created in close collaboration with the gothic scene itself, provided an unbiased picture of the creativity and ingenuity within the fashion of this subculture. The photos shown in the exhibition were taken during gothic parties on behalf of the Centraal Museum. On these occasions, goths dressed their best. During the gothic festival, which took place in Utrecht in August 2003, dozens of goths came to the Centraal Museum to have themselves photographed.

Gothic is Neo
The Gothic Wear exhibition is in line with the NEO exhibition, which was on view in the Centraal Museum from 27 September 2003. In NEO, sponsored by Douwe Egberts in the context of its 250th anniversary, neo styles have been widely put in the spotlight over the past 250 years. Not only well-known 19th-century neo styles such as neoclassicism or neo-baroque were shown, but insight was also given into the way in which neo-styles play a role in cultural life to this day.

Collection in this exhibition