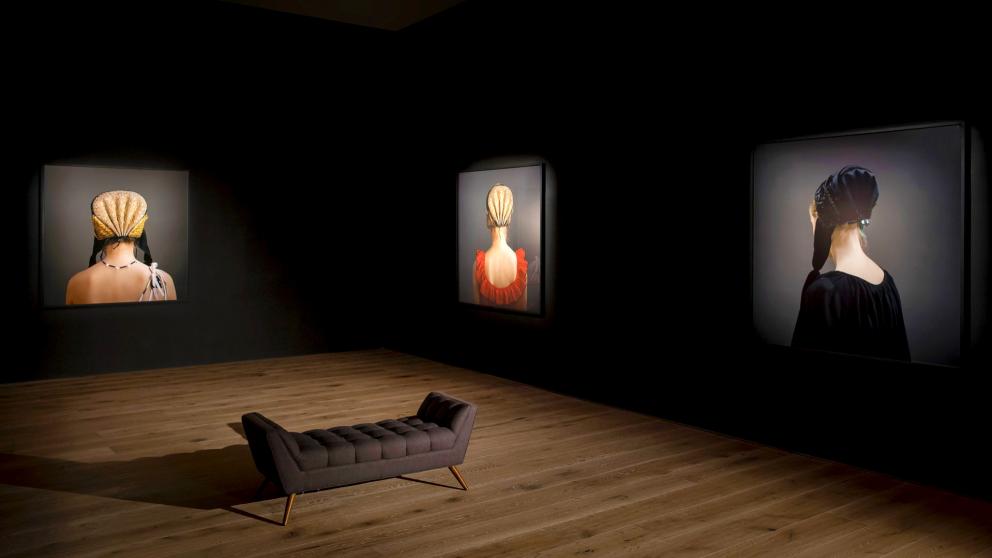 Created by women of extraordinary needlework skill, the guldnakke is an early example of female entrepreneurship. Søndergaard works consciously with large-format images to enhance the visual effect of the intricate embroidery and opulent materials of the bonnet. The striking contrast between the 21st-century clothing of the subjects and their anachronistic bonnets suggests a conflation of time. SCAD FASH presents nine photographs from the series alongside a vintage guldnakke from the university’s permanent collection and four on loan from the Furesø Museer, Farum, Denmark.

Trine Søndergaard is a Danish photography-based visual artist. Søndergaard lives and works in Copenhagen, Denmark. In 1996 she graduated from Fatamorgana, the Danish School of Art Photography. Søndergaard’s work is marked by a precision and a sensibility that co-exists with an investigation of the medium of photography, its boundaries and what constitutes an image. Layered with meaning and quiet emotion, her works are highly acclaimed for their visual intensification of our perception of reality. In 2000, she was awarded the Albert Renger-Patzsch Prize and has since received numerous grants and fellowships.

Søndergaard’s work has been shown in solo and group exhibitions around the world and is represented in major public and museum collections, such as Museum of Fine Arts Houston, Texas; MUSAC, Leon Spain; Gothenburg Museum of Art, Sweden; The National Museum of Norway, Oslo; The Israel Museum, Jerusalem; Maison Européenne de la Photographie, Paris, France; and ARoS, Aarhus, Denmark. Søndergaard is a member of the Danish Artists Society and the Artists Association Grøningen. In addition, she has completed public commissions for museums and cultural institutions. Søndergaard has published books with Steidl publishing, Hatje Cantz publishing and Hassla Books. She has also exhibited and published extensively in collaboration with the Danish artist Nicolai Howalt.