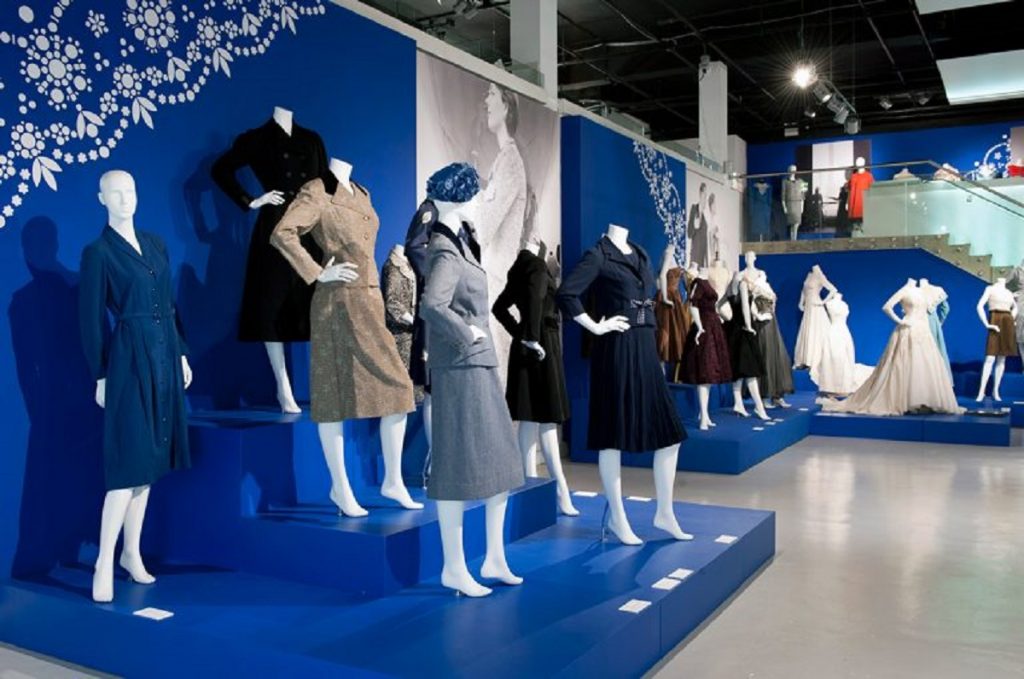 An exhibition of London couture fashion by the designers to H.M. The Queen: Norman Hartnell, Hardy Amies and Frederick Fox. Hartnell to Amies: Couture By Royal Appointment’ celebrates the timeless elegance of London couture and explores how the Queen’s patronage of ground-breaking British designers helped put London on the international fashion map after the Second World War.

Whilst the English have been renowned for their tailoring since the 18th century, there was little typically British couture until Norman Hartnell opened in 1923. His elegant gowns attracted royal and aristocratic customers. Known for the design of the Queen’s wedding dress in 1947 and Coronation Dress of 1953 – the iconic dress of the mid-twentieth century – Hartnell (1901–79) expressed the characteristics and the quality of British high fashion and set the standard for generations to come.

This exhibition begins with the opening of Norman Hartnell’s first salon in 1923 and British high society’s ‘Bright Young Things’, before discussing the advent of Hardy Amies (1909–2003) and Frederick Fox (1931–) amongst the leading couturiers of the post-war years and the fashionable world of London dress-making and millinery. It explores Hartnell’s long career, his landmark art-moderne House of 1935, war-time Utility designs and his well-known fashions of the 1950s and 1960s; particularly the glamorous and romantic eveningwear embellished by Hartnell’s famous in-house embroiderers.

Sir Hardy Amies’ career began as designer at Lachasse, noted for its tailored suits. He was in tune with Christian Dior’s New Look, by 1951 Princess Elizabeth ordered from him, and as Queen Elizabeth II did so for the next five decades. Amies became a successful menswear designer in 1959 with the first recorded men’s catwalk show. The clothes were fashionable and affordable, and the bespoke tradition continues today.

‘Hartnell to Amies’ also highlights the milliner’s role in London couture through the work of Australian-born designer Frederick Fox; his most famous designs are the hats he created for Queen Elizabeth, Queen Elizabeth the Queen Mother, and many celebrities worldwide. The process and craft involved in hat-making will also be explored.

The exhibition ends with a discussion of the design house in the current fashion industry and the resurgence of British heritage brands, traditional tailoring and dressmaking.