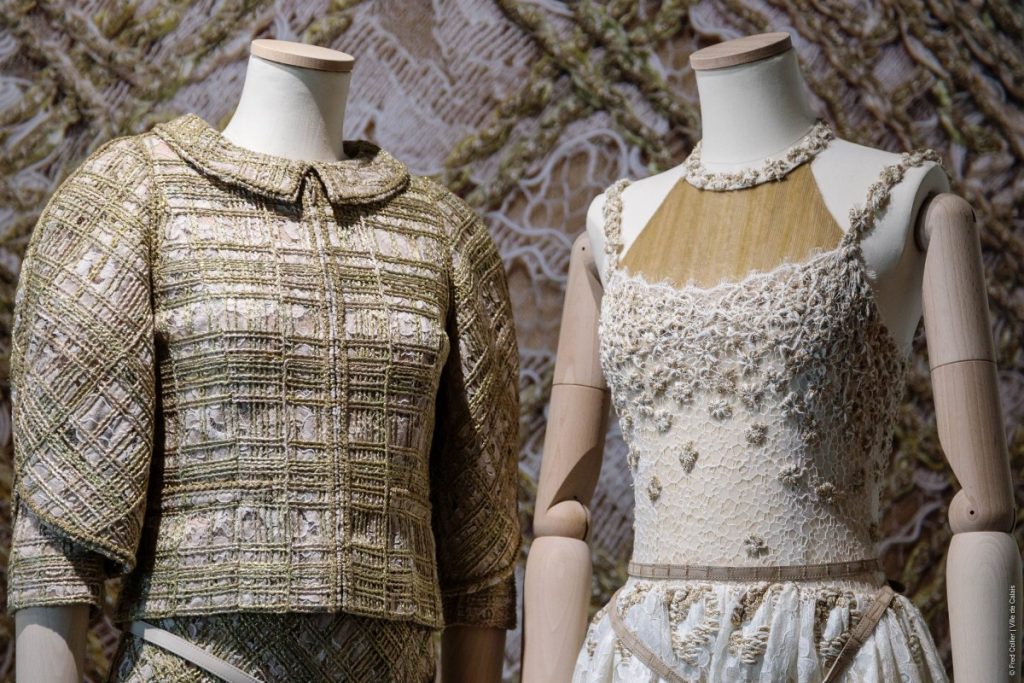 The exhibition Haute Dentelle illustrates the place occupied in ultra-contemporary fashion by the lace woven on Leavers looms. Couturiers turn to this demanding fabric in order to convey their style. The exhibition highlights the way they express this exceptional material, familiar yet little-understood. A king among fabrics, lace dialogues with haute couture.

The Calais Museum of Lace and Fashion is one of the few museums in France to present regular fashion exhibitions. The success of previous exhibitions dedicated to the illustrious couturiers Cristóbal Balenciaga and Hubert de Givenchy, as well as the contemporary designers Iris van Herpen and Anne Valérie Hash, ranks the museum alongside other renowned European fashion institutions. And it is through fashion that the public discovers lace.

The museum pursues an ambitious policy of staging trail-blazing exhibitions, designed by scientific curators who specialise in fashion and who forge a link between the museum and the artistic and economic fields. Although the exhibitions offer the perfect opportunity for studying the collection, publishing reference books and also, through a ripple effect, for shining the spotlight on works on show in the museum’s other galleries, they cannot be devoted exclusively to lace.

Also, the Haute Dentelle exhibition was highly anticipated. It takes a snapshot look at the contemporary uses of lace in the two pinnacles of fashion that are haute couture and luxury prêt-à-porter. Fourteen fashion houses on the French and international scene have been selected for their relevance and diversity. The presentation shows how couturiers make woven lace a subject worthy of consideration: which they overlay and mass together, which they cut and join together.

Haute Dentelle highlights the metamorphoses embodied in these laces which are transformed into moving sculptures. Also revealed are the present-day skills of the French lace manufacturers. More than ever before, the lace manufacturers are turning their heritage into a laboratory for research and a source of creation. Creativity is present at multiple levels, from design to finishing and including the weaving itself: motif, composition, dying and other finishes. Everything can form the basis of re-creation. Those over-used terms, tradition and innovation, take on their full meaning here.

LACE, FROM HANDS TO MACHINES

Of all the world’s textiles, lace is the only one to be of truly European origin. In fact, hand-made lace appeared in Europe in the sixteenth century, in Flanders and northern Italy. Since that time, for the most elaborate pieces, it has retained the status of a luxurious ornamental fabric, its primary function being to sumptuously embellish the apparel of the very wealthy.

Lace is a textile with an openwork support material and motif. Two techniques were developed: “needle lace” made using a parchment, thread and needle, and “bobbin lace” created by a set of bobbins and with a lace pillow as a support. At that time, lace was as prized as it was costly. Time-consuming and complex to produce, it often required the organisation of collective working: the work of several lace makers was assembled to form an entire piece.

The lace that has been produced in Calais for almost 200 years is exclusively mechanical, but it was initially inspired by hand-made lace before breaking free from its constraints. In the nineteenth century, the mechanisation of lace production sprang up in England, in the city of Nottingham, and later in France, in Calais, Caudry and Lyon. Mechanisation made lace production easier and expanded its use, yet without the loss of its precious dimension. In fact, although the new production technique made it less costly, it still required a numerous labour force and sophisticated know-how. This know-how gravitated around the lace weaving loom known as the “Leavers” loom.

At the beginning of the 1950s, there were some fifty haute couture houses and more than 150 lace manufacturers – some of them very small – in Calais alone, not forgetting Caudry and Lyon, also important lace production centres, in particular for dresses. But with its 1,390 looms recorded in 1952 compared with 400 in Caudry and 360 in Lyon and Saint-Quentin, it was clearly Calais that could pride itself on being the worldwide capital for mechanical lace. In 1955, a new product appeared on the market which was made on knitting looms developed by the German industrialist, Karl Mayer: Raschel lace.

Of lower technical and aesthetic quality and very much cheaper than woven lace, this textile was also called “lace”. So in order to differentiate between the two types of production, in the same year French professionals created a trademark, “Dentelle de Calais.®”1

The presence of lace in fashion has always fluctuated, subject to changing aesthetic canons which at different times have valued this fabric to a lesser or greater degree. Today, there is a real enthusiasm for lace, which can be seen on the catwalk as well as in the street. The two lace-making technologies – woven and knitted – are responding to this but in different ways. The former is asserting a two century-old tradition that prioritises quality, creativity and innovation for the luxury market, while the latter is constantly perfecting the technical production equipment and relocating to low-wage countries in order to produce cheap lace.

Today, it seems that the intrinsic characteristics of lace, its varying degrees of transparency and motif are not sufficient in themselves to satisfy the imaginations of couturiers and designers. In their hands, it undergoes repeated transformations, often emerging unrecognisable. Lace can be confused with embroidery and other techniques with aesthetic aspects that are similar to those of lace, even its feel. It is rather the “lace effect” that pleases and inspires, with no particular attention paid to the production techniques (weaving, knitting, laser, embroidery, printing, 3D).

Lace has constituted a source of inspiration far beyond the field of fashion, it influences multi-disciplinary design in architecture, interior design, object design, the table arts, papermaking and jewellery as well as inspiring visual artists, although this general interest is of little benefit to the high-end lace manufacturers. In fact, this woven lace accounts for a vanishingly small proportion of overall lace.

The Dentelle de CalaisCaudry® trademark, owned by the Fédération Française des Dentelles et Broderies (French Lace and Embroidery Federation) is the successor to the collective “Dentelle de Calais®” label. consumption, the vast majority of which is knitted lace. Invariably, most customers – including retailers and professionals in today’s textile sector – make no distinction between the two types of lace. It is absent from the syllabuses of most fashion and design schools because it is a material of great technical complexity, difficult to manipulate and costly. Since tomorrow’s fashion designers and creatives have not had the opportunity in the course of their training to experience the inventive possibilities offered by high-end lace, they will not spontaneously turn to it later on in their careers. This observation is even bleaker beyond Europe, where this textile was born. A major challenge is therefore to introduce students – the future actors in the world of fashion and design – to woven lace.

Haute Dentelle is laid out in the 565 m2 temporary exhibition gallery. The exhibition pathway is made up of 14 display cases presenting 65 clothing pieces from the heritage collections of 14 of some of the most prestigious fashion houses on the French and international scene, from CHANEL to VALENTINO and including RALPH&RUSSO and VIKTOR&ROLF. The spatial layout thus creates a picture that is representative of the diverse uses of mechanical lace in contemporary fashion.

The silhouettes are all taken from recent catwalk shows within the last five years. With just two exceptions, they are on public display for the very first time. Each display case is dedicated exclusively to one couture house and highlights the stylistic originality of the fashion house. This selection of designs highlights the relationship between the fashion houses and lace, through passing time and passing styles: a longstanding history or fleeting encounter, a material of choice or a fabric transcending a collection.

Each display case thus constitutes a picture stamped with a powerful mark of identity. This never-before-seen material is enriched by videos of catwalk shows, photographs, samples of laces used in the dresses on show and lace worked through a variety of processes by one of the most prestigious ateliers to supply haute couture, the Maison LEMARIÉ. A glossary and chronology also provide exhibitiongoers with points of reference. The captions accompanying the fashion pieces place emphasis on the dual creativity on display: that of the fashion houses and also, unusually, that of the lace houses. The supplier is identified and the lace – the raw material – is documented. This work of identification unveils the behind-the-scenes aspect of lace creation, the discussion between textile supplier and artistic director: from bespoke lace designed exclusively for the fashion house to lace that undergoes repeated manipulations until it is rendered unrecognisable, including lace that is magnified for itself. The visitor gains a glimpse of manufacturing secrets which are usually kept confidential.

FEELING WITH THE EYES

In addition to facilitating the taking of photographs (permitted without the use of flash) the glass-free display cases, deep display boxes, allow the visitor to admire the exhibits unhindered by reflections of light. This arrangement allows exhibitiongoers to examine the garment close-up, in all its complexity and not merely its form. They finally have the opportunity to scrutinise the detail of the haute couture dresses, some of which have been up to 1,000 hours in the making. This is a unique opportunity. Because what can one really see at a fashion show where dozens of pieces are paraded past at a furious pace, even when one is fortunate enough to be on the front row? The all-pervading digital presence of fashion images is no substitute for encountering the three-dimensional depth of the garment. The suspended moment in time presented by the exhibition offers that sensory experience. *

The texts from Lace, from hands to machines by Sophie Henwood, Laces and Polymorphous lace by Shazia Boucher, are extracts from the Haute Dentelle exhibition catalogue, co-published by the Museum for Lace and Fashion and Snoeck, 2018. 8 9 IN FIGUREs 14 display cases are placed along the exhibition pathway 14 French and international fashion houses (Paris, London, Beirut, Rome, Milan, Amsterdam) 65 silhouettes from the last five years: the oldest dates from summer 2012 and the most recent from summer 2018. 65 samples of lace 15 French lace manufacturers today perpetuate the knowhow dedicated to the lace woven on Leavers looms.  This lace is intended for haute couture, lingerie and high-end prêt-à-porter.

LENDERs Because of the ultra-contemporary aspect of the pieces, all the silhouettes are provided by the fashion houses. The Maison LEMARIÉ has provided samples demonstrating research into textile manipulation. The lace makers have loaned samples of lace, with or without finishing, so as to provide a measure of the richness of this fabric, and also to separate it from the garment.

FASHION HOUSES (IN ORDER OF APPEARANCE ON THE VISITOR PATHWAY)

LACE MANUFACTURERS IN THE HAUTS-DE-FRANCE REGION (IN ALPHABETICAL ORDER) Although not all the companies are represented equally within the Haute Dentelle exhibition, and even though some are absent, this exhibition pays tribute to the complementarity and extent of these manufacturers’ skills. France is unquestionably the leading Leavers lace production centre in the world. It nevertheless remains the case that other centres exist outside French territory.