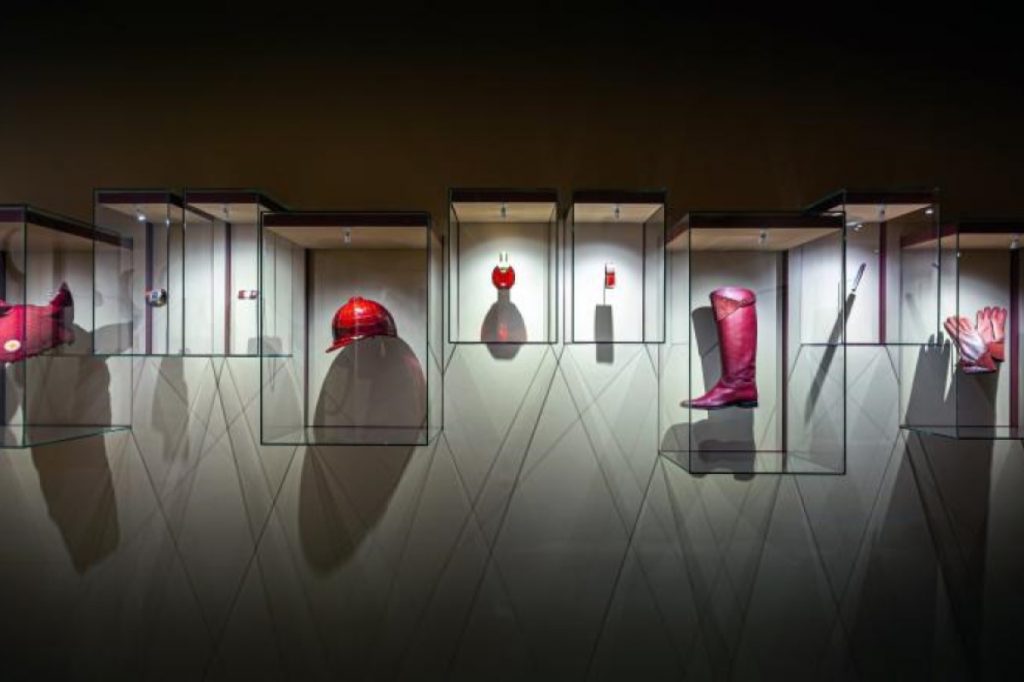 Hermès Heritage is a cycle of touring exhibitions, destined to share the richness of an active heritage with a wide audience. It offers an open dialogue between, on the one hand, objects from the Émile Hermès collection – a cabinet of curiosities designed to nourish the inspiration of a Hermès spirit –, from the house’s archives and Conservatoire des Créations, and on the other hands, objects from recent collections.

The Rouges Hermès exhibition is the second chapter of the cycle. It is a strong component of this reinterpretation of the founding expressions of the Hermès spirit. Beribboned in purple, the sequence tells us a story and develops the intoxicating ambiguity of this rouge H, which is far more diverse than it might seem.

A deep, almost oriental red decorated the original Hermès store in Faubourg Saint-Honoré, Paris, in the very early days. There is no doubt that this originated in a desire to express an elegance that was both unique and suffused with age-old tradition. This ambition was also evident in the collection amassed by Émile Hermès in the first half of the 20th century to nourish inspiration in his workshops. From the Second Empire English-style saddle to the numerous leather goods, aristocratic purple imparts its radiant depth. This flamboyance in the Hermès spirit finds its beacon of warm intensity in the spectacular crystal by Saint-Louis.

The invention of a deep red

In the early 1920s, Hermès promotional images presented leather objects in deep red, breaking with the tradition of luggage in box that was until that then worked in the natural colour of the leather. This innovation, which became well-established in the following years, benefited from the friendship between Émile Hermès and the owner of the Combe tannery. This partnership made it possible to achieve the level of elegance and durability that expresses the soul of Hermès, respecting tradition whilst aspiring to modernity. This emblematic colour resonates with a myriad of hues. It rapidly established itself as the enduring and recognisable hallmark of a unique signature.

Over the shoulder, the arm, or in the hand

Luggage lies at the heart of Hermès’ fundamentals, and the deep reds have featured like a constant refrain in the colour ranges applied to the models that have built the house’s catalogue of designs over the ages. Whether across the bag’s whole surface, or just the leather structures, this constant warm presence is applied to every function: travel accessories, elegant objects, men’s world, women’s universe, treasure chests of crystal and silver… Although the palette of designs is now infinite, whether on the shoulder, over the arm or in the hand, red still asserts the unparalleled enchantment and elegance of Hermès bags.

From riding boots to hat, gloves to headstall, saddle to jacket, deep reds are the natural livery, the emblematic colours, of the Hermès rider and their mount. Outside of the equestrian world, this array of hues suffuses and exalts the accessories of everyday life. Knives, cases, watch straps, assorted accessories,clothing, jewellery… the functional turns to red. And in 2000, the Hermès reds found themselves with a perfume, Rouge Hermès, initially created by Akiko Kamei in 1984 under the name of Parfum d’Hermès.

To grace the everyday

The Hermès interior is also quite naturally bedecked in emblematic reds. Wallpapers and textiles for the home take on a palette of precious hues. Red adorns walls like fine jewellery, embellishing and illuminating daily life. And in this rich setting, accessories and furniture harmonise to create a warm ambience. Like a sculpture that opens out, the jewellery cabinet offers an infinite reflection of this exceptional universe, evoking the tradition of furniture with hidden compartments and the quest of the collector that was Émile Hermès.