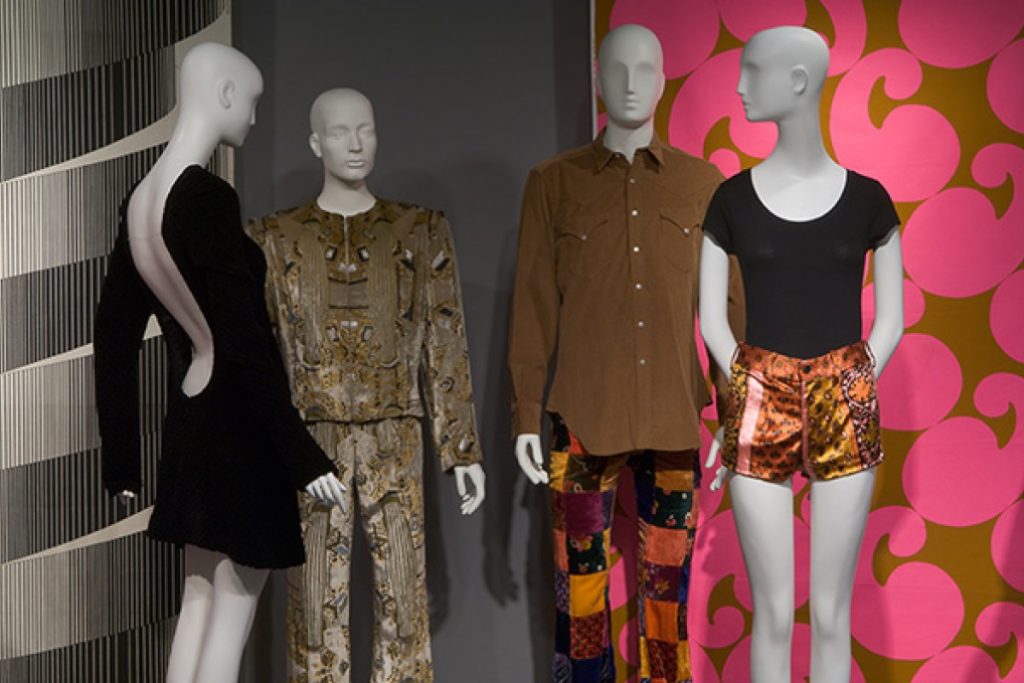 His & Hers
November 30, 2010 – May 10, 2011
Cheri Fein, Executive Director, Public and Media Relations
212 217.4700; press@fitnyc.edu
On View at The Museum at FIT in New York City
November 30, 2010 – May 10, 2011
The Museum at FIT presents His & Hers, a new exhibition that examines the relationship between gender and fashion. Side-by-side comparisons of mens and women’s clothing will highlight their differences and similarities. Beginning with the 18th century and leading up to the present, His & Hers will explore changing perceptions of masculine and feminine dress, including so-called unisex and androgynous dress, as well as developments in cross-gender appropriation. While skirts, for example, are generally regarded as feminine garments in Western culture, garments such as kilts and sarongs are common attire for men in other parts of the world, and in recent years, Western designers such as Jean Paul Gaultier have created skirts for men.
His & Hers will begin with complementary pairings of His and Hers clothing by mid- to late 20th century designers who created fashions for both men and women. A pinstriped, navy blue woman’s pantsuit designed in 1967 by Yves Saint Laurent, who was an influential proponent of trousers for women, will be shown alongside a Saint Laurent mans suit in velvet. Versace mens and women’s jackets from 1992, embellished with similar cowboy details, will be shown together. Other featured designers will include Pierre Cardin (the first couturier to introduce a menswear line), Giorgio Armani, and Helmut Lang.His: Cucci, mans tuxedo, navy slubbed silk, black satin, black wool, 1957, Italy, Gift of Elizabeth E. Brady. Hers: Fontana, evening dress, grey silk taffeta and raffia, circa 1957, Italy, gift of Barbara Halpern. Miami Vice, mans suit, white linen, magenta cotton knit, aqua cotton, 1989, USA, gift of Universal City Studios.The historical timeline will begin with a brocaded silk court dress from circa 1760, paired with an elaborately embroidered velvet mans suit from circa 1785. Together, these garments will illustrate how upper-class men and women of the 18th century wore fashions that were similar in many respects. While such lavish materials and adornments usually appear feminine to the modern eye, in the 18th century, they were considered aristocratic.

The opulence of 18th-century menswear provides an interesting counterpoint to the generally staid mens fashions of the 19th century. During this period, day and eveningwear for men was typically dark and somber, while women’s dresses were brightly-colored. However, men did wear colorful, exotic garments at home. For example, a brightly patterned mans dressing gown from the 1840s will be shown alongside a woman’s demure, white cotton morning robe. By the 1890s, women’s tailored suits began to appropriate elements of mens clothing.

Moving into the 20th century, His & Hers will feature a sporty, checked wool mans suit from the 1920s paired with a checked silk day dress by Louiseboulanger. In the 1930s, women’s preferences for broad-shouldered suits actually preceded a similar trend in menswear, and examples of each will be shown side-by-side.

The Peacock Revolution of the 1960s, which transformed menswear, will be exemplified by a stenciled velvet suit by the English label Mr. Fish. Meanwhile, many women began wearing miniskirts that showed off their legs, as well as trousers for day and evening. Highlights will include similarly styled mod pantsuits for both men and women.

By the 1980s, the growing presence of women in the workplace resulted in the creation of women’s power suits. His & Hers will include an example by Yves Saint Laurent that features feminine details, such as a soft bow tie and playful animal print, alongside a mans power suit by Alan Flusser. A pastel mans ensemble by Versace (made for the trend-setting television show, Miami Vice) will exemplify the new male of the 1980s.

Although many contemporary designers continue to subvert gender codes in various ways, most collections today are still clearly defined as menswear or women’s wear. Nevertheless, some designers consider bridging the male/female divide to be fundamental to their work. For example, a woman’s pantsuit by Albert Kriemler of Akris combines masculine elements of tailoring and restraint with a sleek silhouette that highlights and flatters the female form. In contemporary design, violating gender boundaries is usually a function of style, rather than an act of provocation.

His & Hers is organized by Jennifer Farley and Colleen Hill, together with Tiffany Webber. The exhibition will be on view from November 30, 2010 through May 10, 2011 in the Fashion and Textile History Gallery at The Museum at FIT.

A Fashion Museum: The Museum at FIT is the only museum in New York City dedicated solely to the art of fashion. Best known for its innovative and award-winning exhibitions, which have been described by Roberta Smith in The New York Times as “ravishing,” the museum has a collection of more than 50,000 garments and accessories dating from the 18th century to the present. Like other fashion museums, such as the Muse de la Mode, the Mode Museum, and the Museo de la Moda, The Museum at FIT collects, conserves, documents, exhibits, and interprets fashion. The museums mission is to advance knowledge of fashion through exhibitions, publications, and public programs. Visit www.fitnyc.edu/museum.

The museum is part of the Fashion Institute of Technology (FIT), a college of art and design, business and technology that educates more than 10,000 students annually. FIT is a college of the State University of New York (SUNY) and offers more than 46 majors leading to the AAS, BFA, BS, MA, MFA, and MPS degrees.

The Couture Council is a membership group of fashion enthusiasts that helps support the exhibitions and programs of The Museum at FIT. The Couture Council Award for Artistry of Fashion is given to a selected designer at a benefit luncheon held every September. For information on the Couture Council, call 212 217.4532 or email Couturecouncil@fitnyc.edu.