Frida Kahlo:
Making Her Self Up 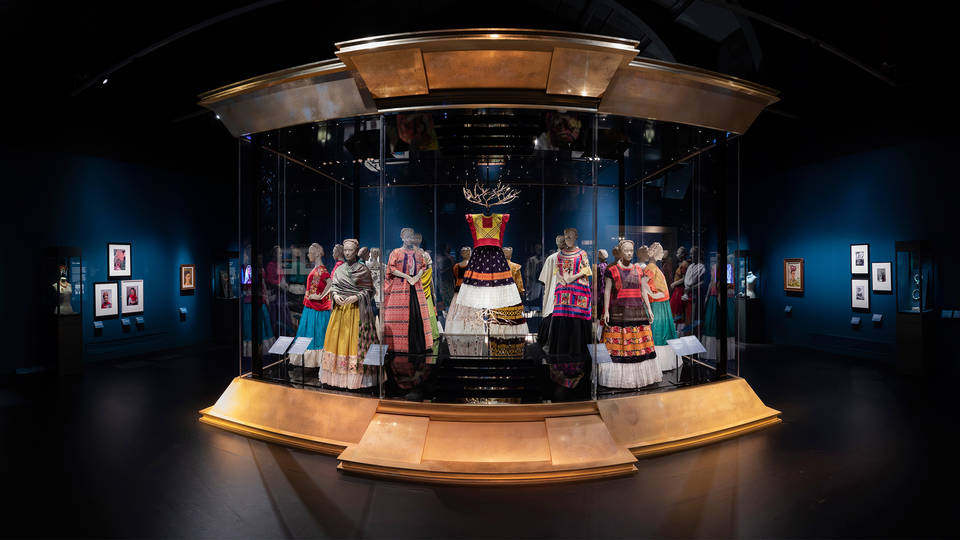 Claire Wilcox has been Senior Curator of Fashion at the V&A since 2004.

The medical bandages were dipped in buckets of plaster and wrapped around her naked torso in layers which gradually hardened to provide a rigid carapace, immobilising any movement that would undo the benefits of the surgery on her vertebrae and thus cause further damage to her spine; and all the while the young woman – only nineteen – hung by her feet while the plaster was dried with blasts of hot air, so that the bespoke corset – which she would wear for weeks, if not months – would hold true. And once, when this performance was conducted at her family home on the corner of Allende and Calle Londres, the bandages were wrapped too tightly, and as they heated and contracted – as plaster will do in exothermic reaction when mixed with water – the girdle began to compress her lungs and, terrified by her screaming, her family had to cut her free from its grip without recourse to medical shears, for the doctor had left and there was no orthopaedic cast technician with an oscillating cast saw to hand, for it was the 1920s.

These stories Frida Kahlo told about herself with gusto and humour, never self-pity, just as she told many other stories, firstly about the childhood polio that led to a weakened and shorter right leg and how she was teased for this, and then the near-fatal accident that compounded this imbalance and added many more troubles to her stoic body. Her subsequent suffering and the endless ways she tried to be cured of an injury that could not be cured, at least not at that time, when such operations – and she had many – were likely to do as much harm as good, meant that she was often bed-bound, and here she held court, much in the manner of a queen receiving guests in her bedchamber. The corsets – there were others, some made of leather, some in the form of back braces ordered in America, where she also sought medical help – imbued her with a stiff, regal posture, and you see this in her demeanour, over and again. In her self-portrait Me and My Doll (1937) we see her sitting upright on a rush-based, simple wooden bed on a terracotta-tiled floor. She is dressed in a long green skirt with frothy white flounce that hides her legs and a loose blouse with a band of red embroidery around the neck, and she holds a cigarette – her ubiquitous attendant, counterbalance to the artist’s brush. A large, undressed doll (she liked to dress and undress her dolls) with porcelain-white skin – in contrast to her own – sits beside her like a phantom child. But look closer, for the initial impression of tranquillity and innocence is disrupted by the fact it has a damaged foot, in wry acknowledgement of her own.

In the photographs, of which there are many – for Kahlo had a magnetically compelling visage and an ability to look straight through the camera to the viewer’s eye – it is evident that she was a gift for photographers, including her father, who documented his favourite daughter throughout her childhood and early adulthood with the careful objectivity of love, and her lover, Nikolas Muray, whose technically magnificent colour carbro portraits made us fall for her too. Here she is in a picture by one of the leading art photographers of the day, Edward Weston, in San Francisco in the early 1930s, newly arrived; on the cusp of becoming herself. She is wearing a fringed shawl  and the weight of her country’s history in the form of a triple string of heavy, pre-Hispanic jade beads unearthed from graves: single beads once placed in the mouths of the dead, strung together to encircle her stalk of a neck.

Many years later, our conservator finds touches of green paint on the necklace, as if a brush has been held against it to match their hue; these very beads can be seen in several of the self-portraits and were buried for a second time, in a locked bathroom for half a century after her death, alongside most of her personal possessions, and only discovered a decade or so ago.

Many women photographed Kahlo too, for the development of hand-held Leicas and Kodaks unarguably allowed physical and artistic liberation, as reportage journalism became a profession that was, uniquely, open to women, who were able to traverse diverse political terrains under official protection as news gatherers and image collectors of the artistic milieu of their time. I list them: Tina Modotti, her revolutionary friend and artist; the French-German photojournalist Gisèle Freund; her compatriot and friend, Lola Álvarez Bravo. They sought her at home, mostly; in her bed, in her garden, camera-ready, dressed as if for a carnival, regarding herself in one of the many mirrors that filled her house, offering a kaleidoscopic multiplicity of images that, patched together, in the end, conceal as much as they reveal, for she is always in control. Perhaps her true self can only be seen through the mirror, so important for the self-portraitist; one was even set into the canopy of her sickbed by her parents so she could see, and paint, herself. And all the while that she is standing, sitting, lying, we witness this regal nature that was a combination of physical injury and powerful, charismatic personality and difference.

This differentiation between herself and others was epitomised by a colourful and dignified way of dressing that eschewed fashion and convention, down to her black bird-wing eyebrows and sable-soft moustache, that drew on the regional clothing and textile traditions of Puebla and Tehuantepec and other regions but that was – and there is no other word for it – mixed up with vintage. This took the form of skirts cut from the silk of nineteenth-century gowns, shawls from the same century, American thrift-store blouses, jangling jewellery of little or no value (except for the heavy gold dowry necklaces sourced from the Isthmus of Tehuantepec). She wore her long skirts with under-petticoats and flounces (removable, for laundering) that swept the floor, and stitched bells onto them so that people could hear her coming; and her embroidered blouses were loose fitting, in the traditional way, hence without fastenings, for they were simple lengths of textile seamed at either side with a hole left for the arms and another for the neck (such garments can be quickly folded and put away, and take up no hanger space), and these could be easily pulled on and off, for someone who had to wear a corset. And these plaster corsets, with their solid porous surfaces, were like frescoes on which she could paint, so that she was wearing another layer, body art if you like, bearing her own brushwork – an act of bravado to decorate one’s tormentor as if, as my curator friend said, she had explicitly chosen to wear them.

The corsets, like the paintings, are an X-ray into her preoccupations: communism, in the form of a hammer and sickle; pain, shown as the torture of a spine depicted as a crumbling column; childlessness, for one has a delicately painted unborn child over the abdomen, the image taken from an illustrated obstetrics manual. She dealt with loss by studying it and by painting it, and in keeping with her country’s close relationship with death, even kept a foetus in a jar in her bedroom, said to have been given to her by one of her surgeons. The bandages that went to make the corsets, the plaster that bore the imprint of her body, the half-shells that survive (for plaster corsets have to be cut down each side to release their occupants) reveal their internal truth to form – for example the dip to accommodate the breasts, the swelling out above the hips, the sweat. They emulate the way that a couture garment, made for a specific body, with its own internal rigidity made not from plaster but from crin and baleen and other stiffening materials, can be regarded as a body mould, a source of information from which internal dimensions can be taken so that, if needed (and it was needed, once, in the museum), a client could be identified without doubt by their torso, if one had another of their corseted garments with which to compare, and so they bear testament to the uniqueness of each body.

No one is symmetrical. I should know; scoliosis runs in the family. So, when we look inside those plaster corsets and see the faint texture of bandage and imprints of her pores in the plaster, we are also seeing the shadow of one upon whose body it was moulded; who once bore its weight. Casts and moulds, corsets and girdles, sweat and wear; asymmetry, a fragile spine. Whether medical or fashionable, what could be more intimate, especially when it protects the beating heart?

‘Frida Kahlo: Making Her Self Up’ at the V&A Museum was based on the exhibition ‘Frida Kahlo: Appearances can be Deceiving’ at the Museo Frida Kahlo, Mexico City,  (November 2012 – November 2013) curated by Circe Henestrosa and Judith Clark and designed by Judith Clark.

Reproduced from ‘Patch Work: A Life Amongst Clothes’ by Claire Wilcox, with kind permission from Bloomsbury Publishing, 2020