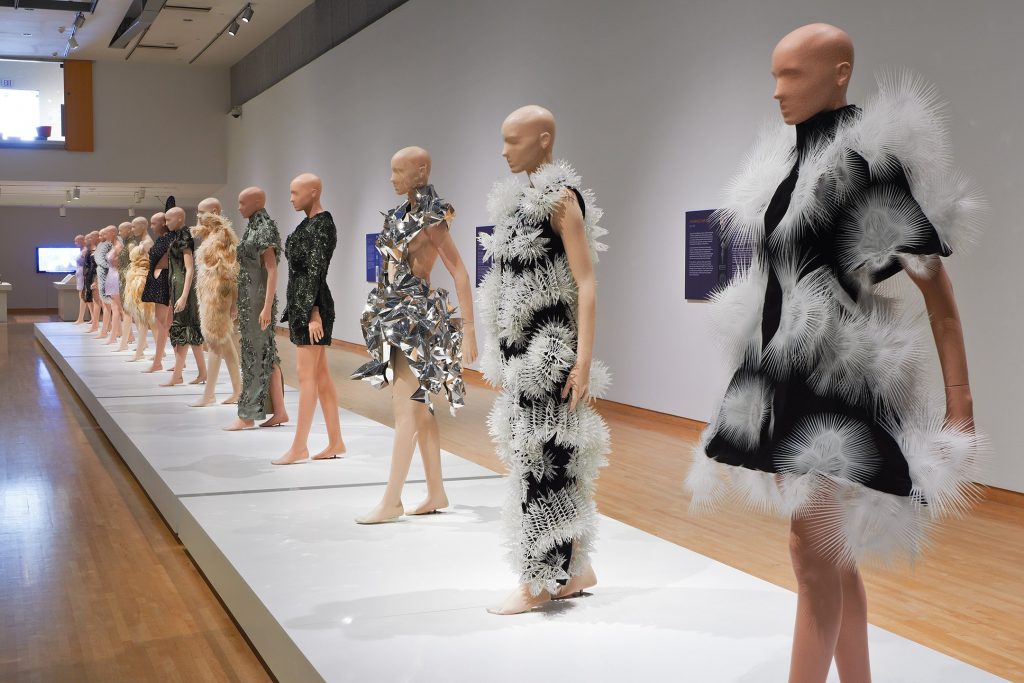 Since her first collection in 2007, van Herpen has made a name for herself within and beyond the fashion world by combining tradition with radical innovation. Unparalleled in her multidisciplinary approach to creation, she has collaborated with artists, architects, and scientists such as Philip Beesley, Jólan van der Wiel, and Bart Hess, as well as teams at the European Organization for Nuclear Research (CERN) and Massachusetts Institute of Technology. In 2011, TIME Magazine included her 3-D printed dresses on its list of 50 Best Inventions. Phoenix Art Museum is the western-most destination on the North American tour of the exhibition, and the last chance to see these extraordinary collections of futuristic fashions. Featuring 45 ensembles created from 2008 – 2015, the minimalistic installation will also include a selection of her fantastical shoe designs and runway show footage. A featured work is the dress from her 2014 collection Biopiracy, on view for the first time since it was purchased by Arizona Costume Institute to celebrate the 50th anniversary of the fashion design collection and the Museum.

Iris van Herpen: Transforming Fashion is co-organized by the High Museum of Art, Atlanta and the Groninger Museum, the Netherlands. The exhibition was curated by Sarah Schleuning, High Museum of Art, and Mark Wilson and Sue-an van der Zijpp, Groninger Museum. Its Phoenix premiere is made possible through the generosity of Arizona Costume Institute, Miriam and Yefim Sukhman, APS, Contemporary Forum, and UMB Foundation with additional support provided by the Joan Cremin Exhibition Fund and Lloyd and Sharon Powell.