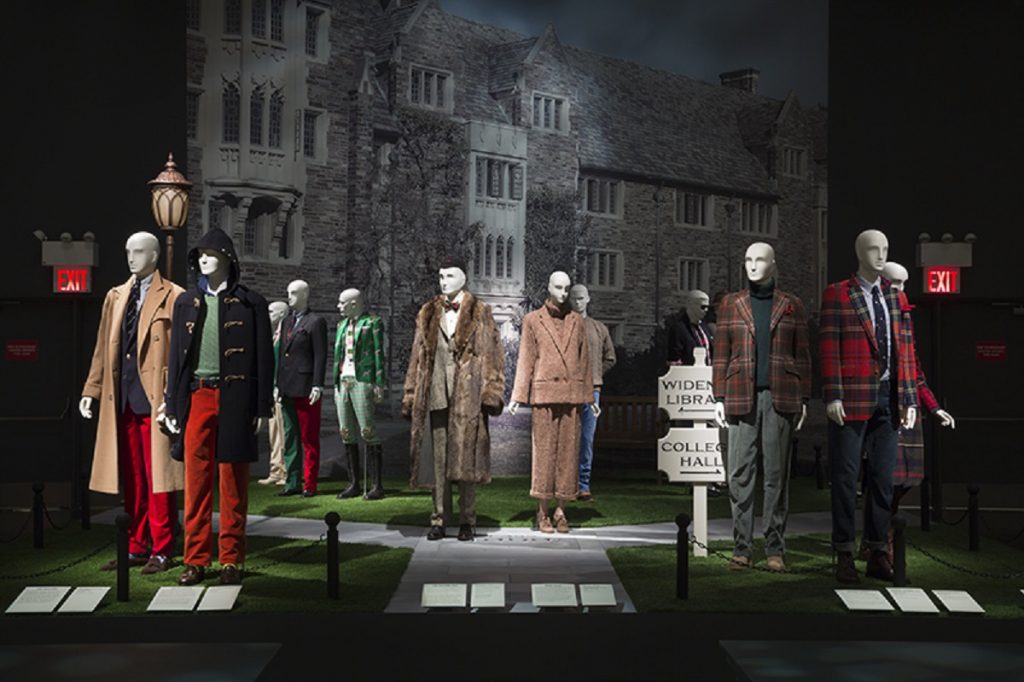 Ivy Style celebrated one of the most enduring clothing styles of the 20th century. It examined the Ivy League Look, which began during the early years of the century on the quads and in the libraries of elite, all-male, American universities, such as Harvard, Yale, and especially Princeton. Often viewed as a classic, even static, way of dressing, Ivy was a cutting-edge look during its heyday, and by mid-century its appeal was spreading beyond the campus to a diverse population of young men, from working class GIs to jazz musicians. It became codified as Ivy style and today, well into the 21st century, Ivy continues to inform the evolution of menswear.

The exhibition focused on menswear that dates from the early days of Ivy to the present.  The gallery was arranged thematically (rather than chronologically), into sections that created an overall setting evoking the liveliness of an Ivy League university campus. These sections included a grassy quad, a classroom, and a dorm, as well as a library and an area devoted to varsity sports and athletic wear. Another key setting was a university shop, the kind of retail establishment that existed in nearly every city in the United States by the mid-20th century.

Each environment presented material that is appropriate to it, with clothing that ranged from casual to formal, and from old to new. Daywear, evening wear, and even sports clothes from not only Brooks Brothers and J. Press, but also Chipp and Gant intermingled with work by contemporary designers, such as Ralph Lauren, Michael Bastian, and Thom Browne.

Purists sometimes bemoan the ways in which Ivy (often referred to these days as preppy style) has been reinterpreted by the fashion world. Yet this classic look has stood the test of time and has thrived for decades precisely because it is so brilliantly distilled and perfected that its elements can be tweaked and even upended without losing the distinctive, spirited essence of Ivy. That would seem to be the ultimate testament to this quintessential, American look.

Ivy Style was organized by MFIT Deputy Director Patricia Mears, along with co-curators and consultants Richard Press, former president of J.Press (which was founded by his grandfather, Jacobi Press), and noted men’s fashion writer and editor G. Bruce Boyer. The exhibition was made possible in part through the generosity of Brooks Brothers with additional support provided J.McLaughlin.

The exhibition is accompanied by a book of essays, also titled Ivy Style, edited by exhibition curator Patricia Mears and published by Yale University Press. Content includes essays by Mears; scholars Dr. Peter McNeil, Dr. Christopher Breward, and Dr. Masafumi Monden; leading menswear writer G. Bruce Boyer; and Christian Chensvold, founder of the Ivy Style blog. Because English menswear provided Ivy style with its initial vocabulary, contributors to the book will touch upon British clothes dating to the 19th century, as well as on textiles that were invented centuries. The book also touches upon other equally compelling, though perhaps less well-known, aspects of Ivy style, such as the interrelationship between leading jazz performers and the high-end purveyors of Ivy style, and its international appeal; in fact, Ivy style is now a familiar presence on both high fashion runways and the Japanese street style scene.

The Couture Council is a membership group of fashion enthusiasts that helps support the exhibitions and programs of The Museum at FIT. The Couture Council Award for Artistry of Fashion is given to a selected designer at a benefit luncheon held every September. For information on the Couture Council, call 212 217.4532 or email couturecouncil@fitnyc.edu

Admission is free and open to the public.

Image © The Museum at FIT