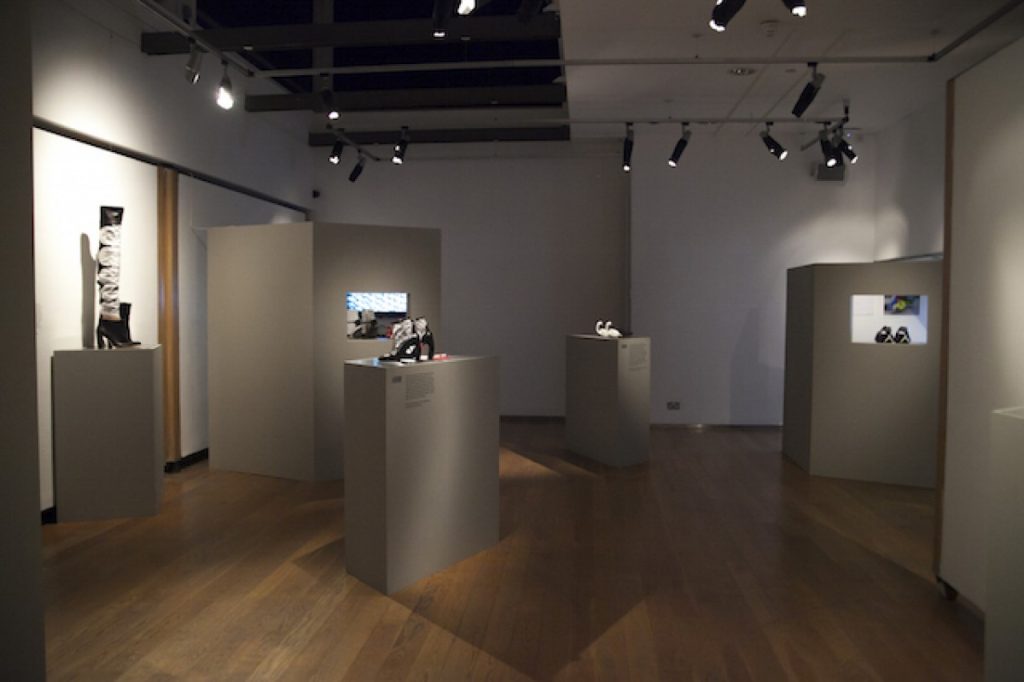 Benjamin John Hall, Fashion Space Gallery’s first design resident, took inspiration from current geopolitical issues and espionage. His starting point and continued focus of interest is the assassination of Alexander Litvinenko. The title of this exhibition, Laboratory 12, one name for the KGB’s secret poison laboratory tasked with developing colourless, tasteless, odourless poisons. One such poison, Polonium – was identified as Litvinenko’s cause of death.

Through a collection of highly engineered footwear, Hall explores the extent to which governments potentially could or already are securing their best interests in a current global political and economic environment that is marked by uncertainty. Each of the eight pairs of shoes on display in this exhibition highlights a specific notion or concept unearthed through his extensive research into documented tactics used by various security agencies worldwide. These range from subtle psychological warfare to concealed recording devices.

By interrogating the possibilities or – in some cases – the realities of how far governments are prepared to go to maintain the balance of powers by bending international law and manipulating the media to hide this from the public eye, Hall draws attention to the precariousness of contemporary world politics.

To enable some of the footwear’s intended technical functionalities, Hall collaborated closely with architect and material scientist Richard Beckett, wearable computing and tangible design researcher Nanda Khaorapapong and 3D print and CAD designer Martyn Carter. The combined expertise of Hall and his collaborators has resulted in a series of complex, highly evolved shoes, both fully wearable and fully operational.