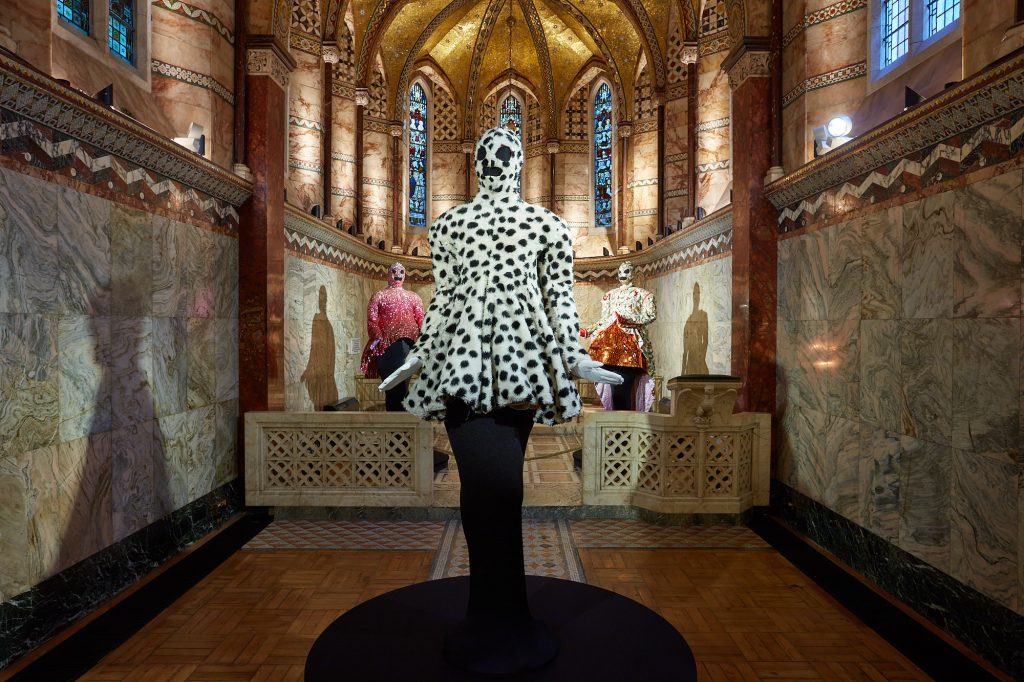 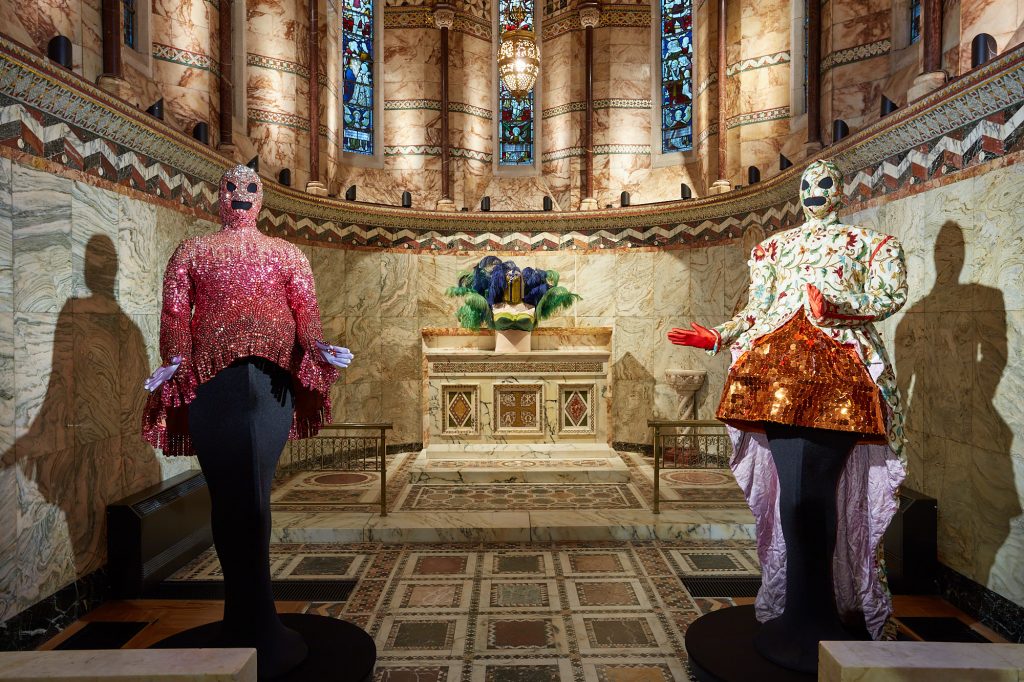 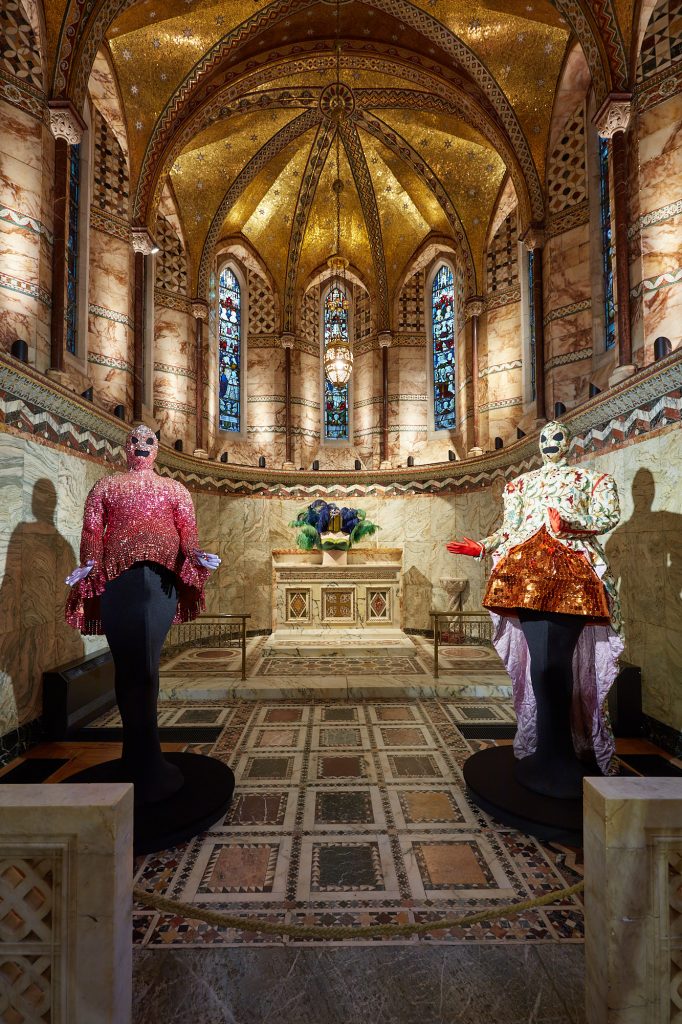 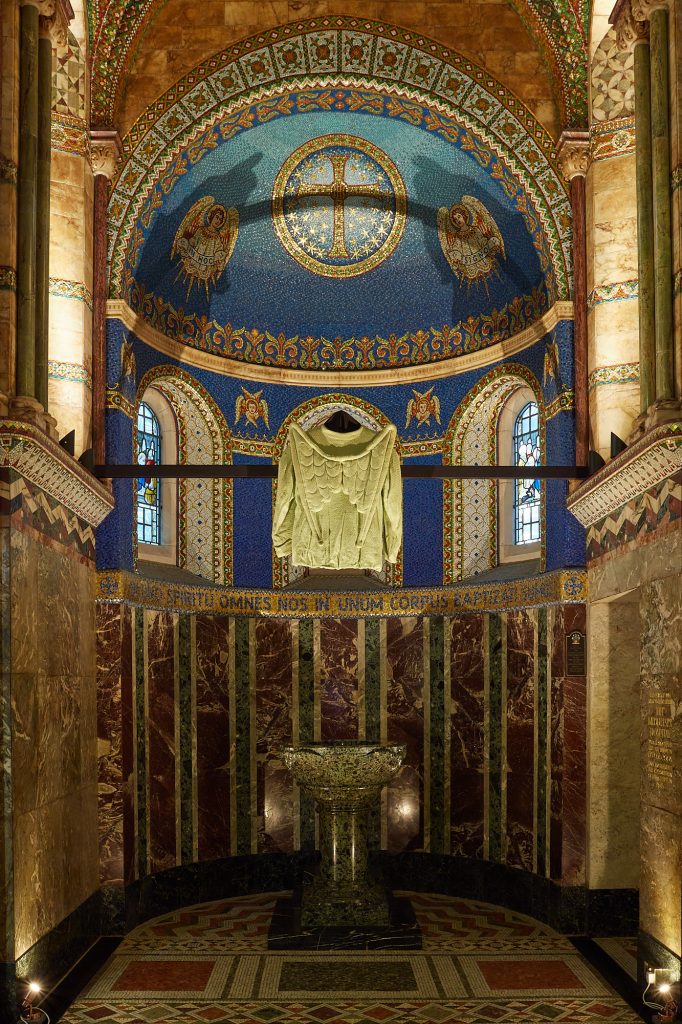 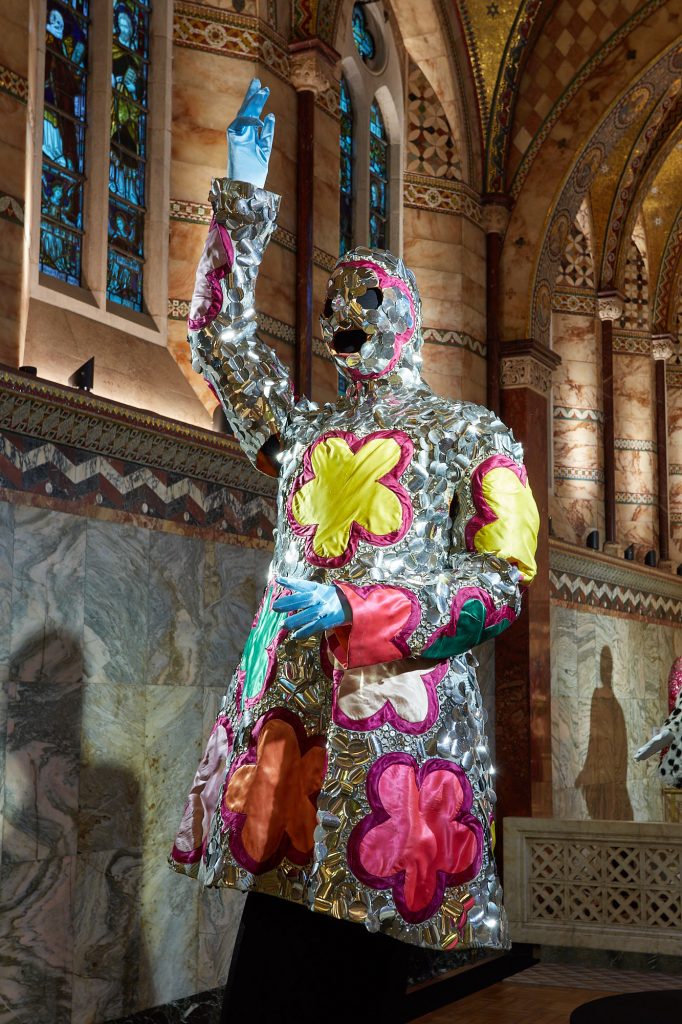 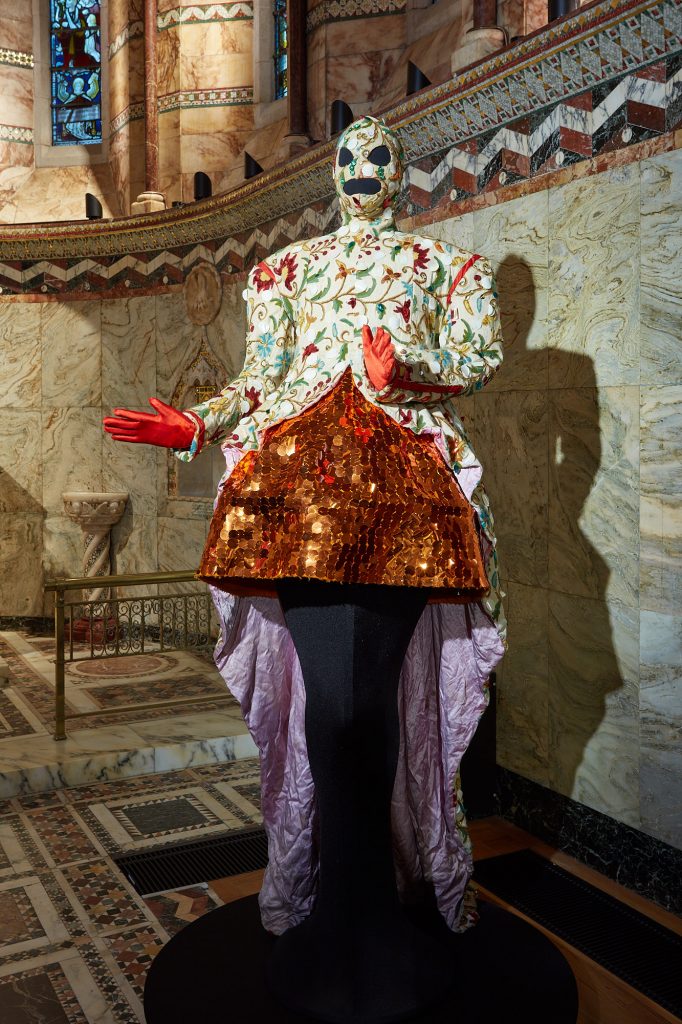 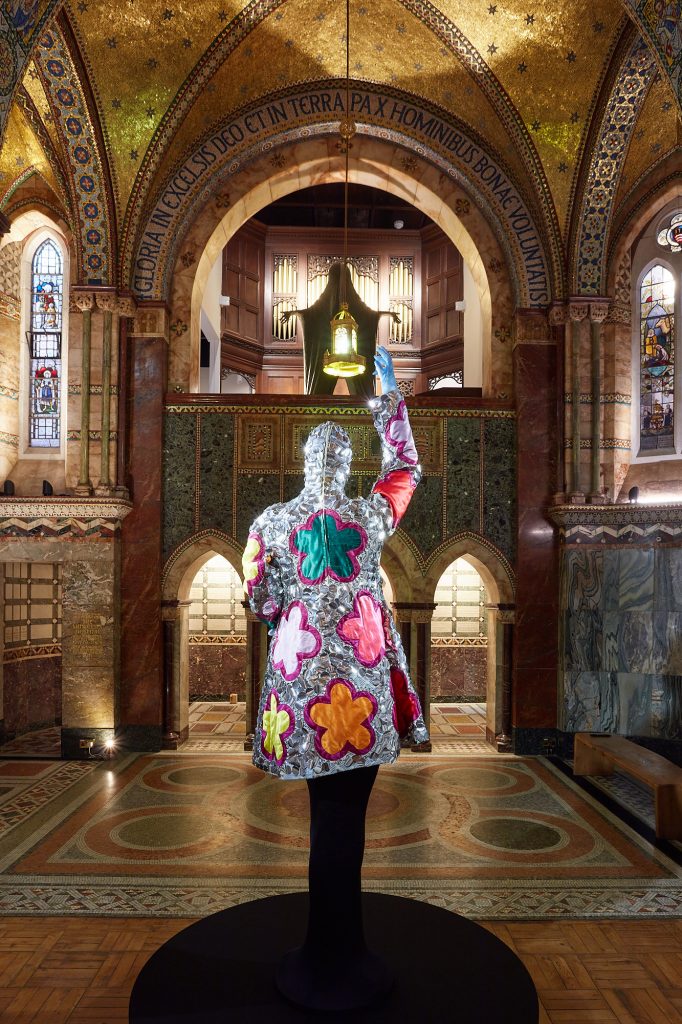 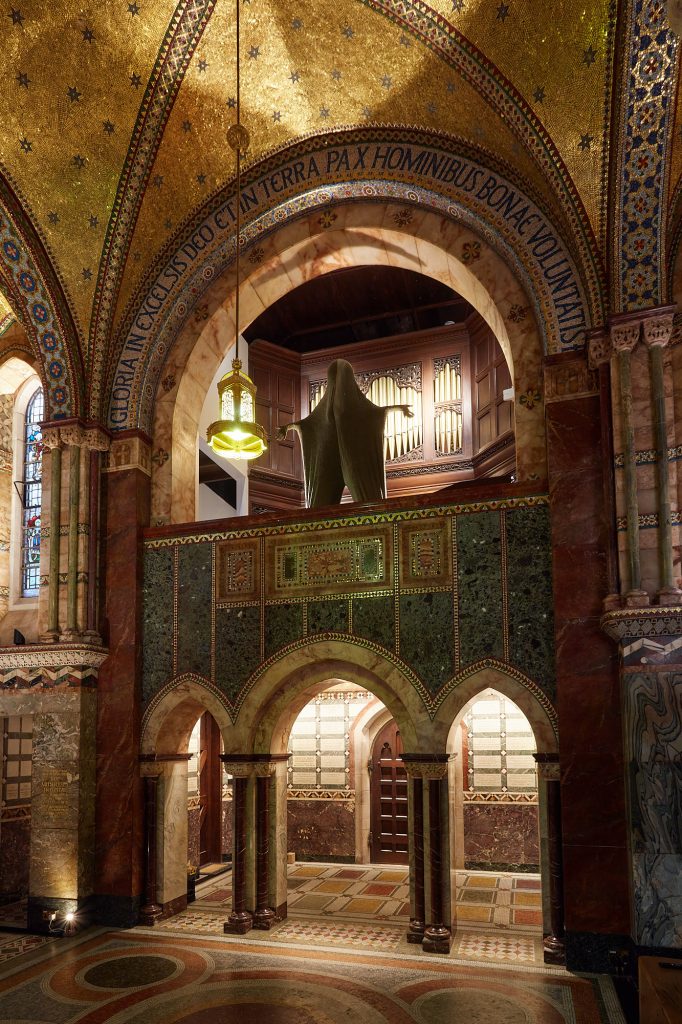 The Fitzrovia Chapel is proud to present an exhibition to celebrate the life and work of renowned performance artist Leigh Bowery. The chapel is the only remaining building of the Middlesex Hospital, where Leigh died from AIDS on New Year’s Eve 1994.

Leigh is a legendary figure who spans the worlds of art, fashion, dance, club and music. Essentially he himself was the living breathing work of art, his now iconic designs and costumes were ubiquitous and meant for Leigh, as he pushed his body through ever more extreme creations, designed to shock and thrill onlookers from dance floor to gallery.

He was also known as one of Lucian Freud’s most famous models, sitting for the renowned painter for several years and becoming close friends, his large naked bald form becoming almost as recognisable as when wearing his own outlandish and ornately decorated costumes and creations.

Leigh died of AIDS on New Year’s Eve 1994, shortly after his last performance at the Freedom Cafe, Soho in November, where people saw for the last time his legendary ‘Birth’ performance where he gave birth to his assistant and close friend Nicola Bateman live on stage, with Freud, Alexander McQueen and his other close friend Sue Tilley all on the front row. But he never told anyone he was ill, apart from Sue, instead instructing her that when he died: ‘Tell them I’ve gone to Papua New Guinea’.

The Fitzrovia Chapel have worked with the Leigh Bowery Estate and in particular Nicola, whom he married shortly before his death, to create a stunning but poignant exhibition of Leigh’s costumes, presenting several of his iconic ‘looks’ against the backdrop of the gold mosaic ceiling and marble walls of the chapel.

There is also a specially produced short film with interviews with some of Leigh’s closest friends and collaborators: Nicola Bateman, Sue Tilley, Boy George, Les Child, Richard Torry, David Holah and Lee Benjamin. Dr Rob Miller, who looked after Leigh when he was the Middlesex, and who is now a trustee of the chapel, is also interviewed.

Due to the delicate nature of the costumes we ask that you please do not touch and take care during your visit.

COVID safety: A one way system is employed in the exhibition with a maximum capacity and masks must be worn.

About The Fitzrovia Chapel

Following the closure and demolition of the Middlesex Hospital in 2005, The Fitzrovia Chapel reopened in 2016 within a new development, and is now a secular charity whose remit is for the preservation of the building, public access for the local community and the education and appreciation of culture and our local history and heritage. It is a Grade II* listed building designed by John Loughborough Pearson and his son Frank. Begun in 1891 and completed in the 1930s it is inspired by San Marco Basilica in Venice with an ornate gold mosaic ceiling.