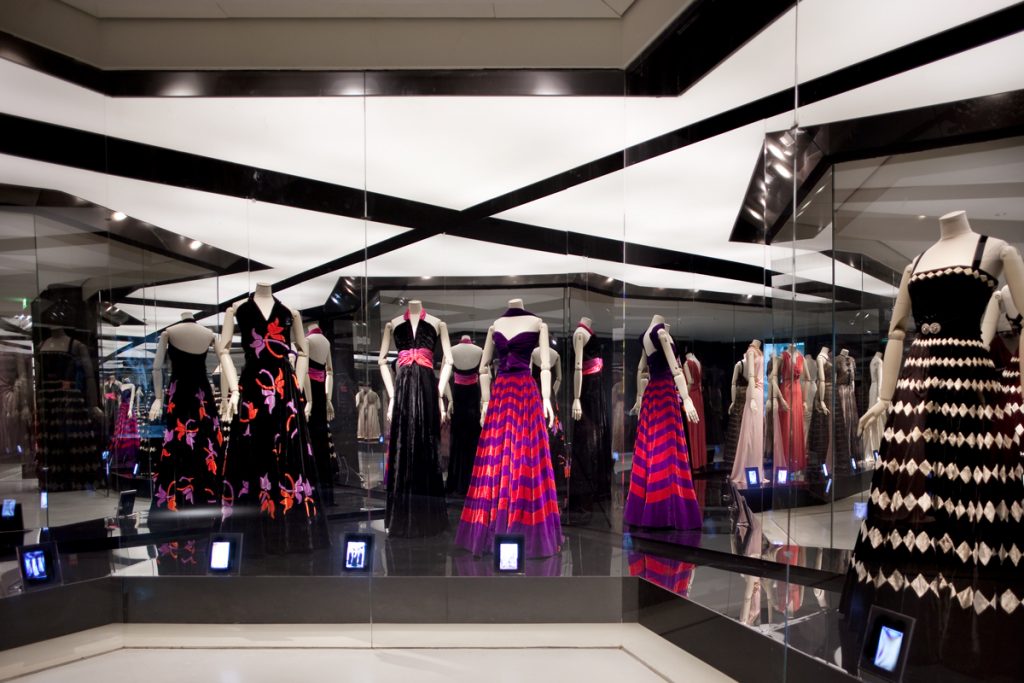 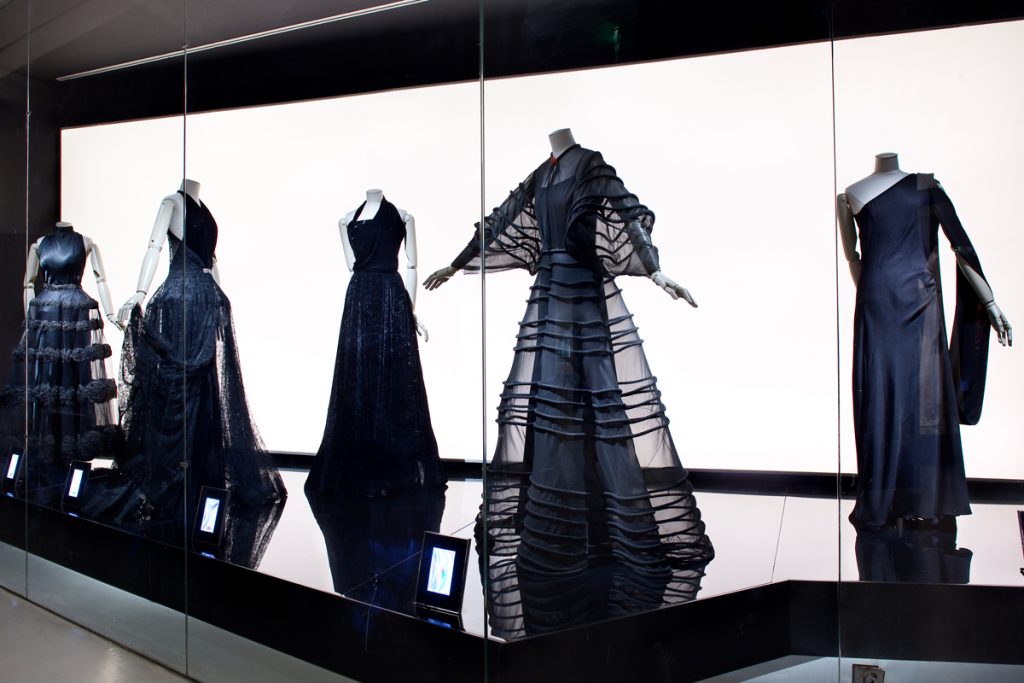 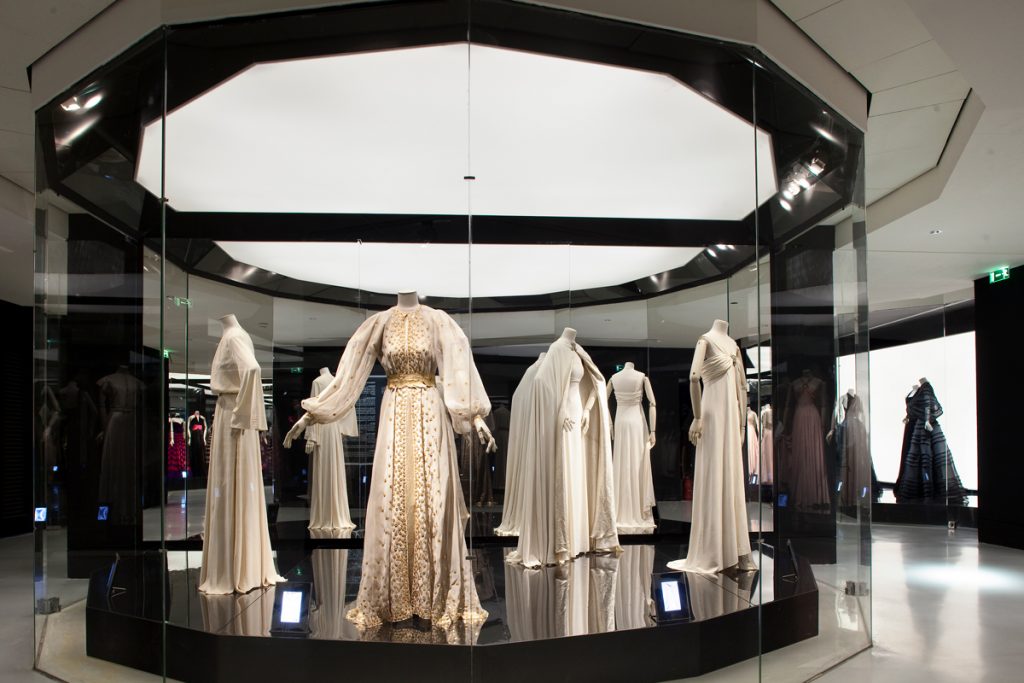 The Decorative Arts exhibit Madeleine Vionnet, fashion purist, first Paris retrospective honoring one of the greatest French seamstresses of the XX th century through hundred thirty 1912 models to 1939 kept in MAD. A pioneer in mastering the bias cut and the art of draping, she has put her genius at the service of women and their well-being. Madeleine Vionnet allowed a real transformation of the silhouette and the aesthetic, thus marking the evolution of the emancipation of the female body. A key figure in haute-couture between the wars, Madeleine Vionnet is considered “the couturier of couturiers“.

Born in the Loiret in 1876, from a modest family, she moved with her father, who was appointed grant collector in Aubervilliers, in the Paris region, at the age of five. Although a brilliant student, she left school at 12 to work and learn sewing with the wife of the rural guard. At 18, she decides to learn English and travels across the Channel where she is employed as a linen maid. In 1896, she was hired by Kate Reily, a London fashion house, where she truly began her apprenticeship in sewing. Back in Paris, five years later, she joined the Callot sisters, one of the most prestigious fashion houses where she cut her teeth. In 1906, Jacques Doucet called on her and entrusted her with the task of ”  rejuvenating ” his house. But by offering models to walk barefoot, dressed in supple dresses that they wear directly on the body without relying on the inevitable straitjacket of rigor at the time that is the corset, she comes up against the reluctance of home and then decides to stand on its own two feet.

It was in 1912 that she opened her own fashion house, at 222 rue de Rivoli, but the Great War forced her to close it in 1914. As soon as it reopened in 1918, it imposed its modernity and enjoyed success. In 1923, her fashion house being cramped, she set up a private mansion, located at 50 Avenue Montaigne. She entrusted the decorator Georges de Feure with the arrangement of her lounges in the Art Deco style, making this place a veritable temple of fashion to conquer an international clientele of the most refined. The organization of the fashion house shows a real avant-garde spirit. As a committed woman, Madeleine Vionnet runs her fashion house like a modern business borrows from a social spirit that was unusual for the time. Concerned about the well-being of its employees, the new facility offers various health and social services: a canteen, a free medical and dental practice for staff and their families as well as a crèche. Finally, it grants paid leave and maternity leave more advantageous than required by the social laws of the time.

As an enlightened visionary, she supports the “Association for the Defense of Plastic and Applied Arts” whose main objective is to protect the interests of the Haute Couture industry by opposing counterfeiting. She closed her fashion house in 1939 when the war broke out, she was then 63 years old.

In 1952, Madeleine Vionnet made an exceptional donation to the Union Française des Arts du Costume which brought together 122 dresses, 750 master canvases, 75 photographic albums of copyrights, account books and works from her personal library. Through this approach, she was the first seamstress to be aware of the need to conserve her heritage in the collective interest, this collection is now kept by Les Arts Décoratifs.

The exhibition chronologically traces the exceptional career of Madeleine Vionnet from 1912 to 1939. The first floor, whose models date from the 1910s to the 1920s, emphasizes the characteristics specific to the creations of the seamstress, which are: the structure and decoration of the garment. An outstanding technician, she pushes refinement to the extreme to achieve absolute purity of lines, thanks to a perfect mastery of the intrinsic properties of the textile, the cut of the garment and its placement on the body. She draws her inspiration from the source of civilizations. Fascinated by ancient Greece, she tries to reinvent the free drape by reducing seams and ties. With the bias, which she systematizes and generalizes to the entire dress, the fabric escapes and floats.

It was also at this time that she oriented her research around the geometric shapes of the square and the rectangle, which she experimented with on a small wooden doll which allowed her to more easily arrange these shapes before making make the model in life size. Permeable to the modernist ideas of her time, Madeleine Vionnet thus modified the traditional conception of clothing. His intellectual concerns relate to those of the purist painters, Amédée Ozenfant or Le Corbusier, who refuse any anecdote in order to keep only the essence of geometric forms with virtues more architectural than pictorial.

The decor embellishes the structure of the pieces with floral motifs – such as the rose that she particularly likes – embroidered, cut, braided or incised on materials such as tulle, wool but also fur. It uses a reduced range of colors: red, yellow and each collection systematically includes models in white and black. In 1929, handling the square and the rectangle to perfection, Madeleine Vionnet introduced the circle allowing the dress to be closer to the body.

On the second floor, the visitor discovers the creations of the 1930s, presented year by year. At the center of the entire route, thematic windows explore the work of the seamstress, highlighting certain peculiarities such as the fringes, the introduction of the circle, the label with her signature.

The collaboration with decorators and designers such as Georges de Feure or Thayaht is also revealed in the course.

In order to be able to exhibit this selection of models, Les Arts Décoratifs has undertaken, since 2007, a vast restoration operation entirely supported by Natixis, as part of its Patrimonial Patrimony of Yesterday, Treasures of the Future policy. Since 2003, Natixis has been working with the largest cultural institutions to make works of national heritage accessible to as many people as possible, to facilitate scientific analysis and restoration. It is in this approach that Natixis previously carried out projects such as the acquisition of the Young Girl with the Sheaf by Camille Claudel alongside the Rodin Museum, the study of the famous Coronelli Globes with the C2RMF and the BnF, the restoration of the missing tapestries of the Tenture d’Artémise for the Manufacture des Gobelins or even the Babylone exhibition with the Louvre museum.

Andrée Putman, signs the scenography of this exhibition. A key figure on the international contemporary design scene, in the 1980s she contributed to making the contemporary architects and designers of Madeleine Vionnet known: Jean Michel Frank, Eileen Gray, Pierre Chareau, Robert Mallet Stevens, whose most popular objects she reissued. emblematic.

The exhibition catalog compares the masterpieces of the Decorative Arts collection, photographed by Patrick Gries, with the eyes of the greatest fashion photographers of the 1920s-1930s and precious archive documents. The texts retrace the career of Madeleine Vionnet, analyze the specificity of her creations and study her relationship with the decorative artists of the time.