Fashion in Brazil: Contemporary and Past (Moda no Brasil: criadores contemporâneos e memória) 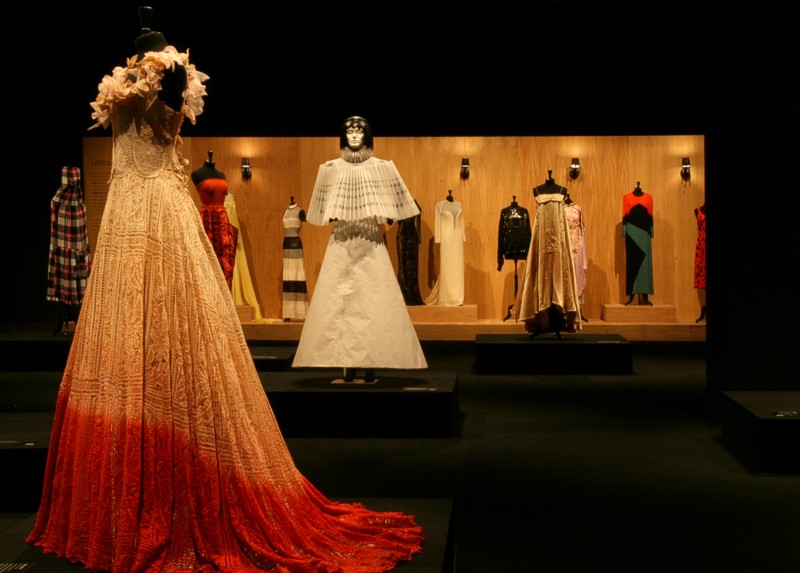 Pau-Brasil, the second cluster, provides an introduction to Brazil’s relationship with bodily ornamentation. It includes works by the artist Maria Lúcia Barbosa that revisit indigenous materials and techniques together with contemporary jewelry.

Also displayed are publications, magazines, supplements and leaflets with fashion illustrations. In the 19th century and for much of the 20th too, these sketches were the only means for information on this subject to reach people. Their original titles follow with free translations in brackets: O Jardim das Damas [Ladies’ Garden] from Portugal and numerous Brazilian publications such as Espelho Diamantino, Manequim, O Cruzeiro, Jornal das Damas and A Cigarra [Diamond Mirror, Mannequin, Cruiser, Ladies Journal and Cicada].

The Trade and Industry block shows two important sectors for the story of fashion in Brazil: the textile industry and trade, which have had a strong presence in Brazil since the 19th century. Examples: Matarazzo, Alpargatas, Santistas, and a large number of shops and clothing stores ranging from street stores, boutiques, and department stores to shopping malls.

Also to be appreciated at the museum are fabrics and advertisements taken from publications, a 1970s dress from Madame Rosita and a 1960s Vogue jumpsuit.

The cluster is also displaying a dress designed by Rhodia, a center for fashion design studies created in the 1980s by the French company of the same name.

The Industry Trainingspace revisits some of the early courses and methods for teaching sewing and dressmaking before the end of the 20th century, when university and colleges fashion courses were introduced. Shots taken in classrooms and exhibitions held at FAAP, such as Papiers à la Mode, in 2008, are part of this cluster too.

The Very Latest block showcases the new generation of designers, some still in progress and other recently graduated, to reveal their style and beauty. This group includes Adriana Tristan from FAAP, the winner of the FAAP Fashion competition and New Designers Creative Award; Ana Paula Soares from SENAC; Augusto Ribeiro and Claudiana Cardoso from FMU; Elisa Quinteros from Santa Marcelina; Kledir Salgado from USP; Mariana Simoni and Thais Storino from Anhembi Morumbi – and Mauricio Somenzari, FAAP, also a FAAP Fashion winner.

The Face of Brazil , cluster highlights Brazilian products and their international impact. Models show jeans and bikinis from Brazil’s top brands. There are 50 pairs of flip-flops – known here as “legitimate Hawaiians” – to celebrate the brand’s 50th anniversary.

Due to the large and varied volume of information around this theme, the exhibition is conceptually based on a museological approach that is quite different from the usual chronological and linear approach.