New Display for the Collections: The Mondrian Revolution 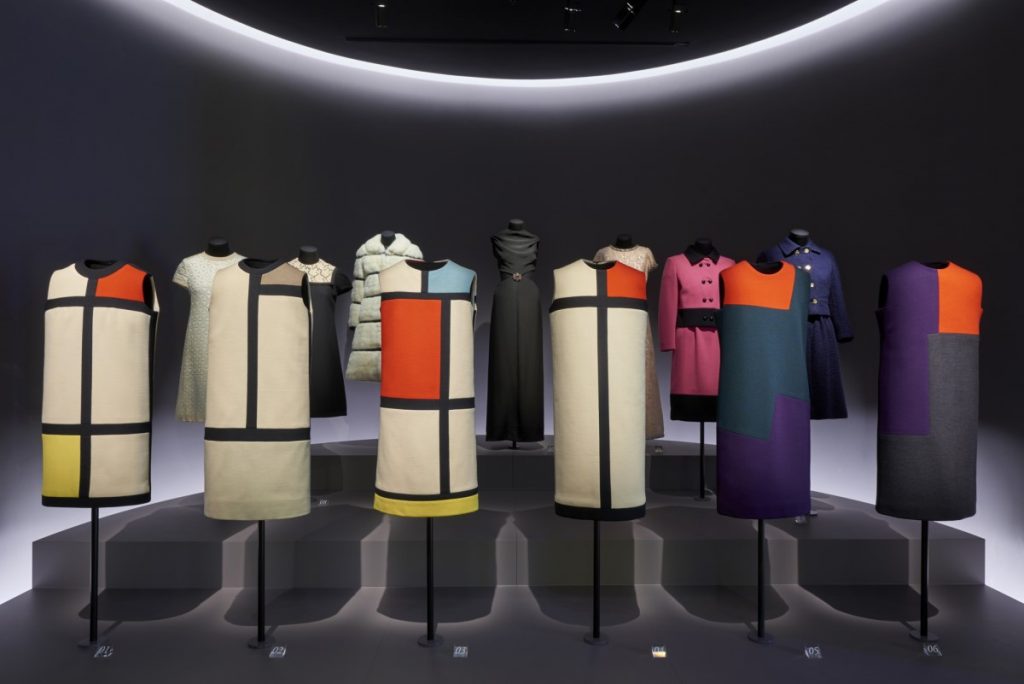 Beginning on February 12, 2019, the Musée Yves Saint Laurent Paris will exhibit a unique selection of approximately fifty haute couture designs throughout its entire exhibition space. In addition to the main themes that shaped the couturier’s body of work, the new display will explore two of Yves Saint Laurent’s major creations: his well-known Mondrian dresses (autumn-winter 1965) and the gowns made in collaboration with the artist Claude Lalanne (autumn-winter 1969).

“Revolutionary” was how Women’s Wear Daily described the autumn-winter 1965 collection, which drew attention for its modern, avant-garde style. Its success was primarily due to a series of dresses inspired by the painters Serge Poliakoff (1900-1969) and especially Piet Mondrian (1872-1944). For its new display, the Musée Yves Saint Laurent Paris will devote a considerable part of its exhibition space to this collection and examine its legacy beyond the history of fashion.

The autumn-winter 1965 haute couture collection was shown on August 6. One month earlier, despite having partially completed it, Yves Saint Laurent decided to redesign most of the collection, imbuing it with more modernity. Taking inspiration from the book Piet Mondrian, Sa vie, son œuvre (Michel Seuphor, 1956), which his mother had given him, Saint Laurent showed twenty-six designs inspired by the Dutch painter as part of the 106 designs in the fashion show. He laid the foundations for a refined aesthetic focused on simple cuts and geometric lines.

These dresses would subsequently alter the connection between fashion and art by transforming a painting into an animate work of art. Switching from canvas to dress, the couturier went from blueprint to three-dimensional shape and, like an artist, created a series of variations on Mondrian’s work. Wool jersey was inlaid with no visible seams, allowing Saint Laurent to offer textile renditions of paintings and channel the Dutch painter’s sense of geometry. Mondrian himself perhaps felt this evolution coming in 1931, when he declared, “Not only does fashion accurately reflect an era, it is also one of the more direct forms of visual expression in human culture.”

The press was unanimous. Marie Claire noted the “dazzling youthfulness and style,” while the New York Times deemed autumn-winter 1965 “the best collection.” Harper’s Bazaar spoke of the “clothing of tomorrow” and “imperative abstraction.” By asserting his desire to confront the principal artists of modernism, Yves Saint Laurent helped to popularize the Dutch painter, who was not widely known at the time. The Mondrian dresses were so successful that they were heavily copied, especially in the United States. These iconic dresses have now become a part of popular culture and have been reinterpreted by contemporary artists, some of whose works will be exhibited as part of the display.

In addition to the Mondrian dresses, the Musée Yves Saint Laurent Paris will present the history of this collection, which was also marked by dresses paying tribute to Serge Poliakoff and a stunning handcrocheted wool wedding gown  with alternating raised patterns and bows. Inspired by Russian matryoshka nesting dolls, it only revealed the model’s face. In this collection, the couturier was able to capture the spirit of his time by creating colorful designs that were graceful, modern, and meant to move.

The Mondrian dresses marked the beginning of the “dialogue with art” that the couturier pursued with Pablo Picasso, Vincent van Gogh, Georges Braque, Henri Matisse, Fernand Léger, and Pierre Bonnard.