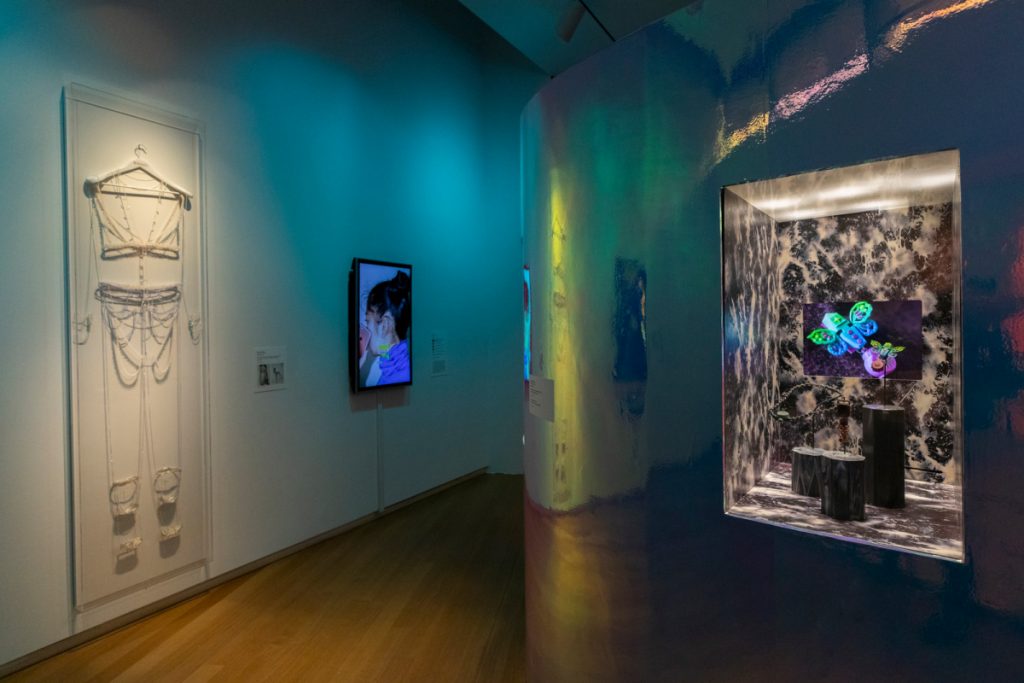 The world teetered on the fulcrum of the year 2000. In the naïve glow of the early Internet, promises of the future were dreamt up, drawn out, and wildly aestheticized. Buoyant and iridescent, virtual and galactic, a new visual reality infiltrated the era, making the future tangible.

It was adolescents who absorbed this imagery. In their bedrooms after school they dialed up and logged on, curiously navigating the digital frontier. They began to piece together their personal identities, uncovering at a record pace who it was they might become.

In the twenty years since, those youthful explorations have taken an inward, self-prioritizing turn. Today, we grapple with image oversaturation, URL/IRL hybridity, device dependency, oversharing, a glittery kind of narcissism. Self-actualization has become open source; individuality, user-generated. Millennials have been raised cyborg. They know they are being viewed.

Contemporary jewelry—the personal expressiveness it stands for, and the combustion of tradition and technology bubbling in the core of its material DNA—is a uniquely telling manifestation of the psyche of our time. Non-Stick Nostalgia: Y2K Retrofuturism in Contemporary Jewelry highlights the work of twenty-nine international artists who explore the friction between the analog and the digital. The exhibition also includes a selection of pieces from MAD’s permanent collection that present different interpretations of futurism in jewelry. The featured contemporary pieces channel an aesthetic that is plastic and pixelated, vibrant and glossy, amorphous or chromed, echoing the post-nascent Internet culture that has evolved since the dawn of the twenty-first century. Like the cultivated digitized images of millennial cyber personas, jewelry has become hyper-real. Together, they are in idyllic sync.

Whether born from predication, nostalgia, or a combination of the two, the jewelry acts as a proposition: Could it allow us to become the perfect avatars—our maximal, fully realized selves?

Since 1956, MAD has collected and shown innovative studio and contemporary jewelry that lies at the intersection of art, craft, and design and challenges the boundaries of the medium. This exhibition exemplifies the Museum’s continued dedication to supporting emerging and established jewelry artists and new concepts that evolve the understanding of the field.

Non-Stick Nostalgia: Y2K Retrofuturism in Contemporary Jewelry is curated by Kellie Riggs with the support of MAD Assistant Manager of Curatorial Affairs Angelik Vizcarrondo-Laboy. It was secured for the Museum by Assistant Curator Barbara Paris Gifford. Design consultation by Misha Kahn.