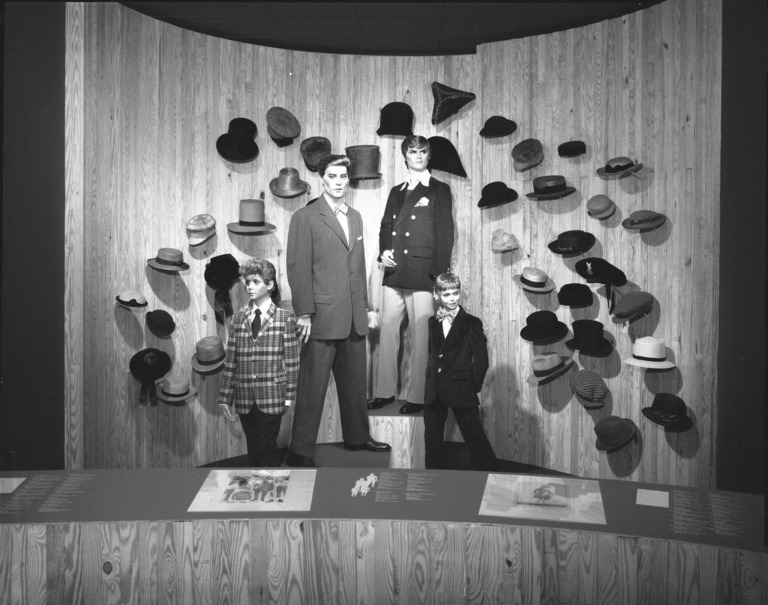 OF MEN ONLY, a survey of American and European men’s and boys’ fashions from 1750 to 1975, was on view in the Robert E. Blum Gallery of The Brooklyn Museum, Eastern Parkway and Washington Avenue, from September 18 through January 18, 1976. More than 500 items comprise the largest and most inclusive exhibition of its kind to be held in the United States in over 25 years. Actual costumes are paired in some instances with original mid-l9th and early 20th-century portraits in which they were worn.

Fully-costumed mannequins and displays of hats, neckwear, shoes, undergarments and other accessories chronicle the changes in male attire from the lavishly embroidered dress of fashionable gentlemen of the mid-l8th century; the somber but exquisitely-detailed early 19th-century frock coat and its descendent, the full-dress suit of the 1920’s; the classic gray-flannel suit of the late forties and early fifties; to the light-hearted and colorful sportswear of (then) recent years.

Elizabeth Ann Coleman, Curator of Costumes and Textiles at The Brooklyn Museum, organized OF MEN ONLY and wrote the text for the exhibition catalogue. The installation was by Daniel Weidmann, the Museum’s Chief Designer. Most of the garments on display were from the Museum’s own collections, with additional pieces on loan from the Cooper-Hewitt Museum, the Metropolitan Museum of Art, and the Museum of the City of New York; The Smithsonian Institution, Washington, D.C., the Valentine Museum, Richmond, Va., and from contemporary designer houses.

The OF MEN ONLY exhibition was made possible through the generous support of the New York State Council on the Arts; and Barney’s, Lightolier, and PBM. Mannequins are supplied and specially adapted by Adel Rootstein of London and New York.