Opulent Era: Fashions of Worth, Doucet and Pingat 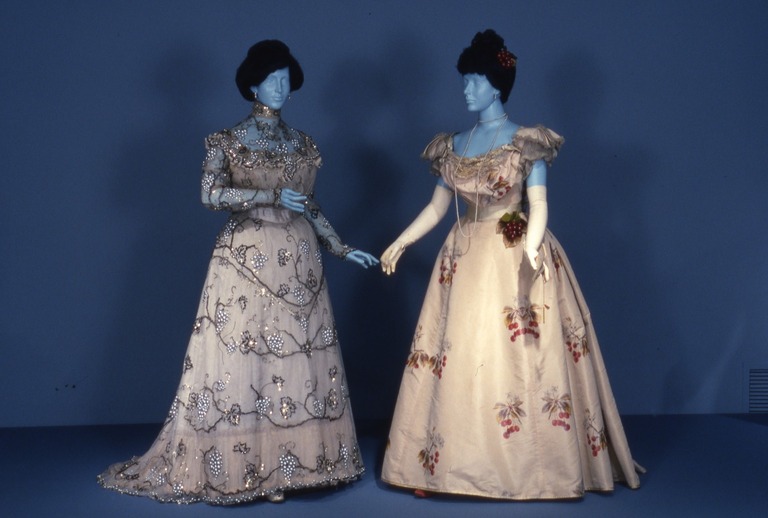 The Opulent Era: Fashions of Worth, Doucet and Pingat, a major exhibition of fashion from the turn of the century contrasting the work of the three most prominent French couture houses, opened at The Brooklyn Museum December 1. The exhibition brought together the work of the leading high fashion houses, Worth, Doucet and Pingat, for the first time, and marked the first time haute couture of the period 1885-1905 as a focus of a major exhibition. It featured 70 outstanding costumes drawn from major public collections in Paris, Edinburgh, New York, Boston, Chicago, Cincinnati and Philadelphia.

The Opulent Era: Fashions of Worth, Doucet and Pingat was made possible by the generous support of the William Randolph Hearst Foundation, the National Endowment for the Arts, a federal agency, and the New York State Council on the Arts.

If only one word could be used to describe the lifestyle of the rich and famous at the end of the nineteenth century it would have to be “opulent.” In both America and Europe, a fascination with the display of opulence by the socially prominent and wealthy extended to every facet of life, including fashion. Paris was the center of the fashion world during this time, and newly evolving Parisian couture houses were called on to create some of the most exquisite garments ever made. These creations had to look expensive and reflect up-to-the-moment styles in fabric, cut and trim.

The best known of the three prominent couture houses during this period was the House of Worth (1857-1956), which was under the artistic direction of its founder, an Englishman, Charles Frederick Worth (1825-1895), and his equally talented son, Jean-Philippe Worth (1856-1926). The House of Worth was noted for its use of incredibly rich French silks, and the fabrics chosen for their gowns and wraps were the most luxurious. More garments have survived from the days of the younger Worth than from his better-known father. The exhibition contained some outstanding examples of sweeping evening wraps, including several in patterned velvets: one of emerald green with bowed floral garlands, another in cream honeysuckle, and a third with a Tudor rose design. A highlight of the exhibition was a spectacular mantle dating from 1889, when father and son shared design responsibilities. It features silk lampas, patterned with full-blown red and yellow parrot tulips sprayed across the wrap, and was once part of the wardrobe of the Hewitt sisters, founders of the Cooper-Hewitt Museum.

The salon of Emile Pingat (active 1860-1895) was one of the most prominent during the second half of the nineteenth century and was perhaps second only to the House of Worth, yet Pingat’s name is almost totally unrecognized today. By 1880 Pingat was recognized as the master of outerwear, and his exterior creations appealed to all who admired superb tailoring skills. His creations represent the very epitome of haute couture and incorporated near flawless craftsmanship with fine detailing and surface trim. His clothes speak of elegance rather than affluence and, like those of Worth, show an adeptness at taking a historical prototype and making it over in keeping with the styles of his own time. Pingat clients included Mrs. Walter Lippincott, Mrs. William H. Vanderbilt and the Pierrepont, Hewitt and Roebling families.

The House of Doucet rose to prominence in the world of women’s fashion during the years that Jacques Doucet (1853-1929) headed the establishment. The Doucet family had for many years run a firm devoted to men’s and women’s lingerie, and young Jacques entered the business just as they branched into custom-made apparel. Doucet creations were soft, fluid, feminine garments and reflected his family’s long association with linens and laces, coupled with his own interest and taste for 18th-century fashion. A gray chiffon and lace afternoon dress from about 1903 is prototypical of the designs of the House of Doucet.

The Opulent Era was selected and organized by Elizabeth Ann Coleman, Curator of the Department of Costumes and Textiles at The Brooklyn Museum. It is accompanied by a fully illustrated book with an essay by Ms. Coleman. The book, co-published by The Brooklyn Museum and Thames and Hudson, Inc., was funded through the generosity of the B. Gerald Cantor Art Foundation and The Andrew W. Mellon Foundation.