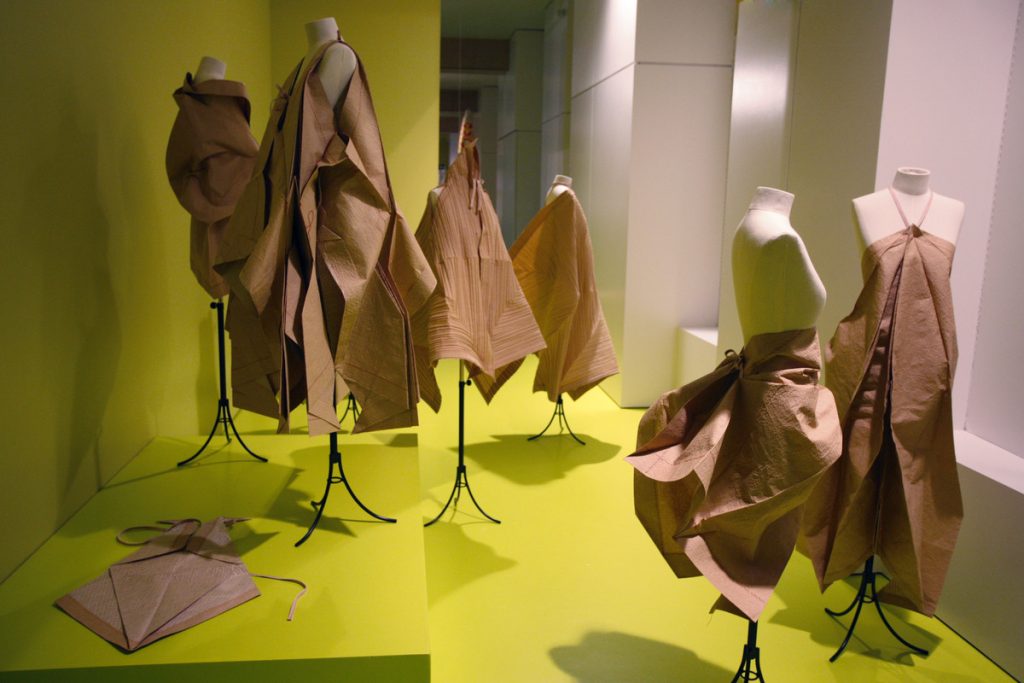 Paper has been used in fashion in various cultures and historical periods, but it is still a little known and little studied phenomenon. With the exhibition “Paper Fashion!” MoMu, in collaboration with Atopos Cultural Organization, Athens, reveals this exceptional niche in the history of fashion. Beginning with a unique collection of 1960s’ paper dresses from the Atopos collection, “Paper Fashion!” focuses on the use of paper and related materials in modern and contemporary fashion.

In 1966, Scott Paper Company of the United States introduced the first throwaway paper dress as a propaganda stunt for their products. Almost instantly, paper clothes became a much-hyped phenomenon that would entrance America and Europe for several years. Produced with conspicuous and colourful prints, paper clothing became a promotional material for the most diverse of objectives. Everything was possible, from Pop art to political campaign slogans. The fragility of paper consequently stimulated the textiles industry to seek out alternative materials that looked like paper, but which offered more possibilities. Ultimately, Tyvek would prove to be the only one of these materials that would continue to be used in the textiles industry to the present day. By the end of the 1960s, the trend had passed its peak and ‘paper fashion’ gradually disappeared from the high streets of the West.

Atopos Cultural Organization, Athens, collected almost 400 paper dresses from this period. As a result, they now have the largest and most important collection of its kind in the world. “Paper Fashion!” presents an important selection from this collection and goes on to look more deeply into the story of paper as an alternative for textiles. Ancient China and Japan in fact had long traditions of working paper into applications for apparel. In the West, paper only appeared as a substitute for textiles in the first half of the 20th century. In periods of economic crisis or war, people sought alternatives for cloth, with paper being the primary option.

With the exception of the late 1960s, the use of paper clothing and accessories has persistently been in the background. Although there has been no question of paper fashion as such since 1968, countless important fashion houses and designers have experimented with paper or with materials that resemble paper.

Paper still speaks to the imagination as an alternative material for clothing and diverse contemporary designers continue to seek ways of incorporating materials that resemble paper in their collections.

“Paper Fashion!” brings together the most remarkable of these creations. In addition to the historic objects, the exhibition includes designs by Hussein Chalayan, A.F. Vandevorst, John Galliano, Walter Van Beirendonck, Dirk Van Saene, Issey Miyake, and many more.