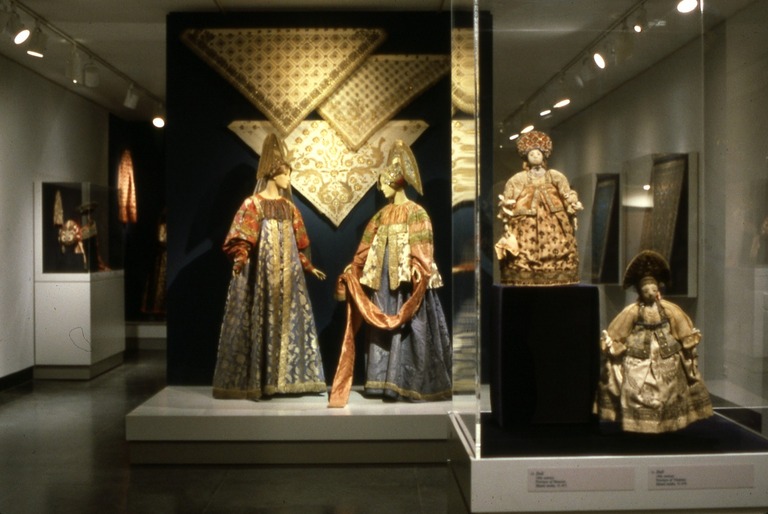 Pearls Among the Gold: Russian Women’s Festive Dress, an exhibition of eighteenth- and nineteenth-century garments and accessories worn by peasant women of European Russia, opened at The Brooklyn Museum on February 25. The works were drawn from the Museum’s own collection of such dress, which has been described as the most important grouping of Russian costumes and textiles outside the Soviet Union.

Many of the over 70 garments and accessories included in the presentation featured an image-laden surface embellishment. Perhaps the best examples of this type of decoration are the sixteen exotically shaped headdresses called kokoshniks. They are adorned with freshwater pearls nestled among couched gold thread embroidery, and their shape was an indication of the marital status of the women who wore them.

All the items in the display were acquired by the Museum in 1931 and were originally part of a larger collection assembled around the end of the last century by Mme de Shabelsky, one of the world’s earliest collectors of Russian peasant textile arts. In addition to the many costume pieces and accessories from her collection, the Museum also purchased decorative towels, bed linen edgings, and laces.

The exhibition was selected and organised by Elizabeth Ann Coleman, Curator of Costumes and Textiles at The Brooklyn Museum. It was made possible, in part, by a grant from A&S.