Pink: the History of a Punk, Pretty, Powerful Color 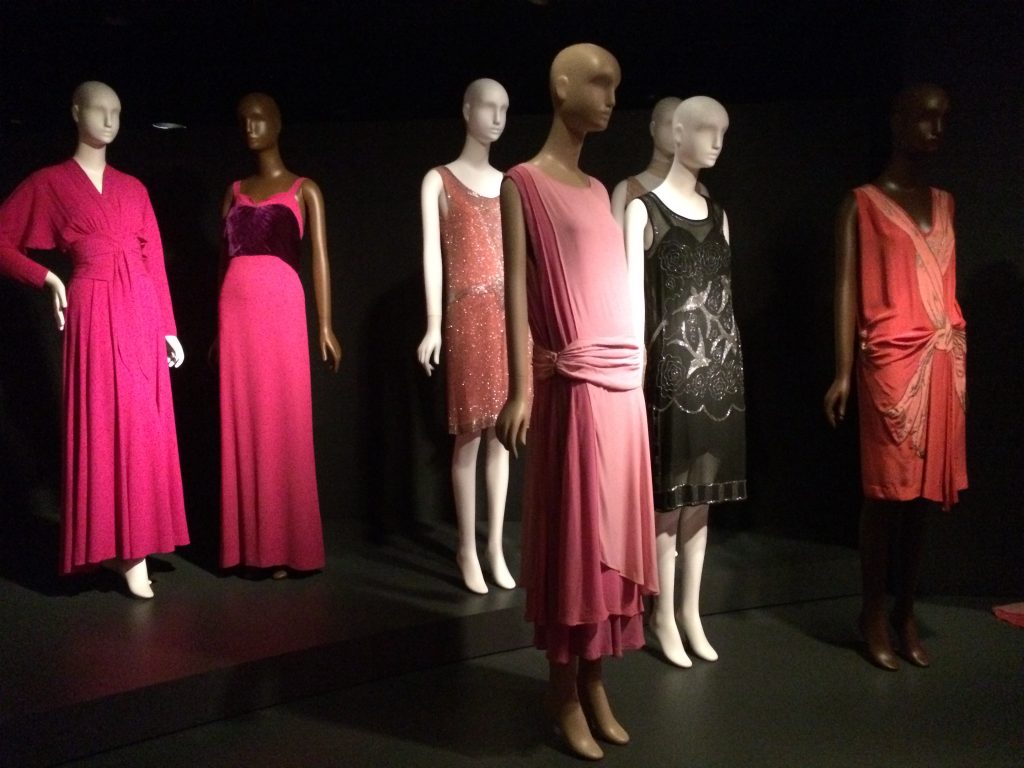 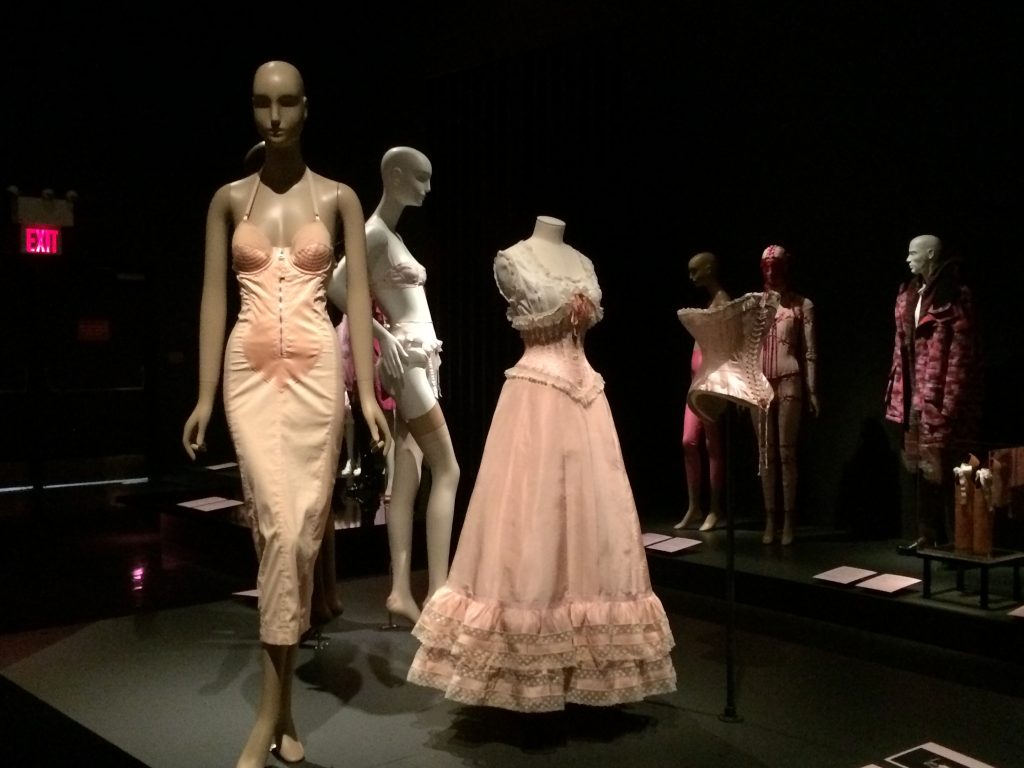 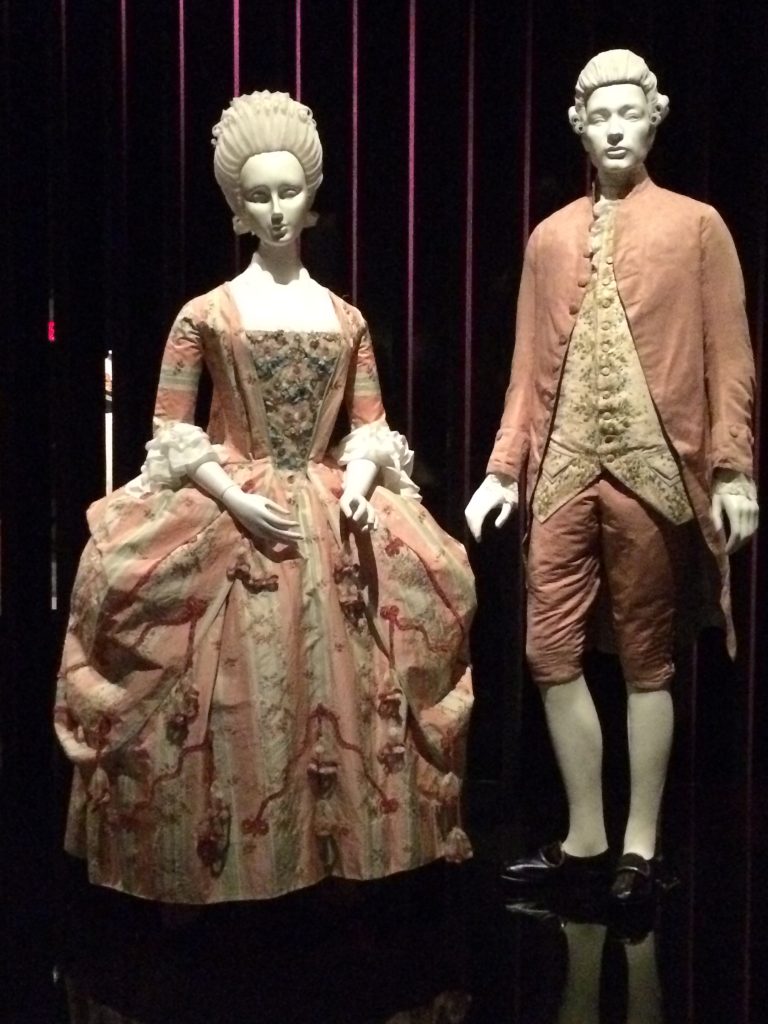 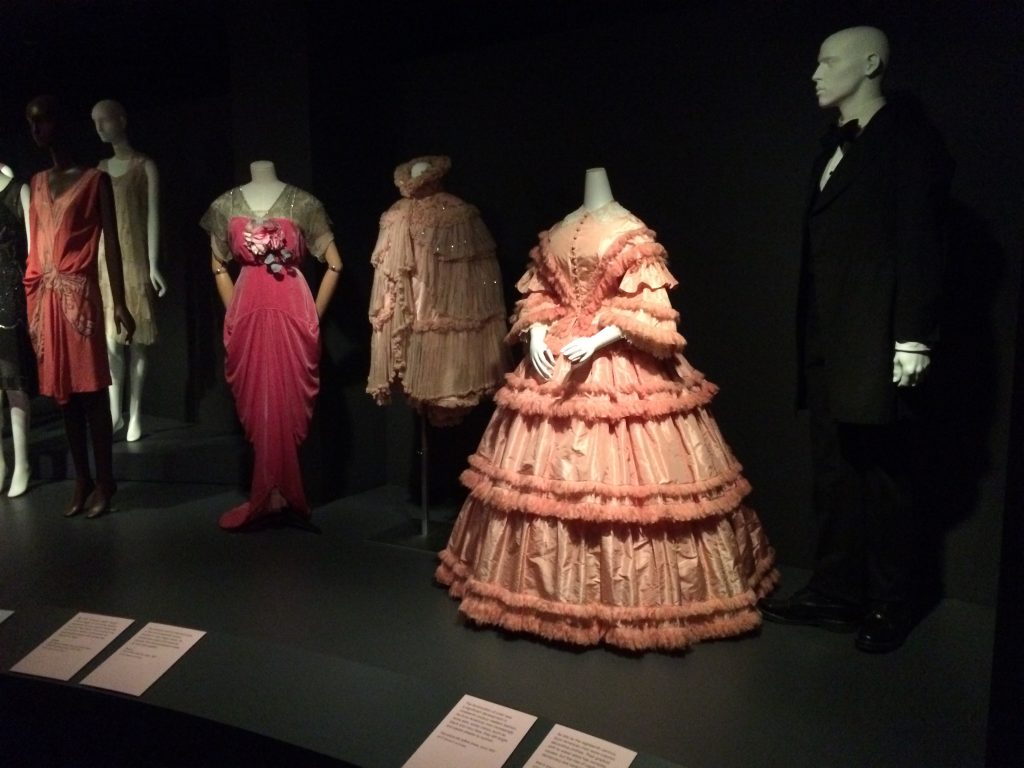 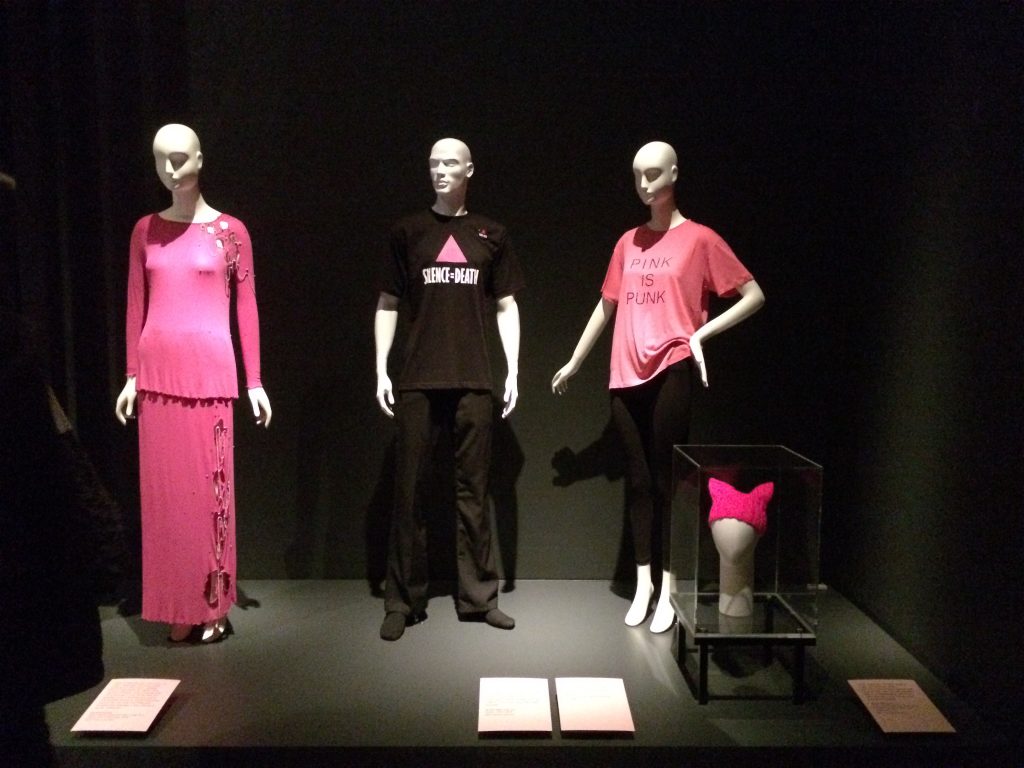 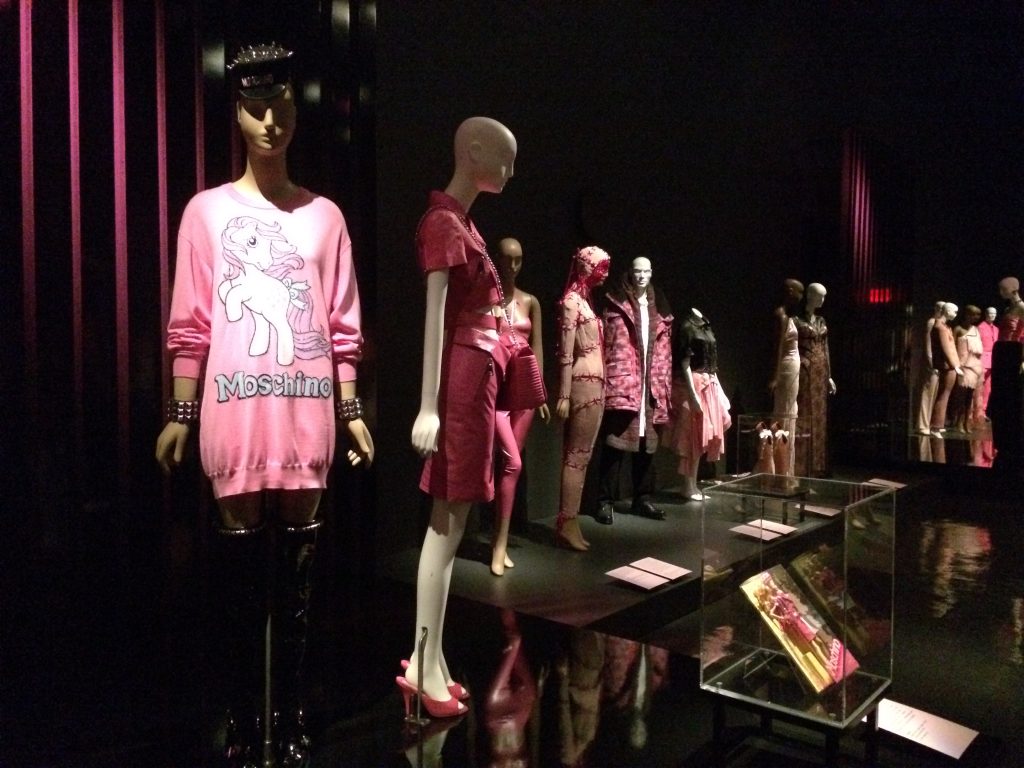 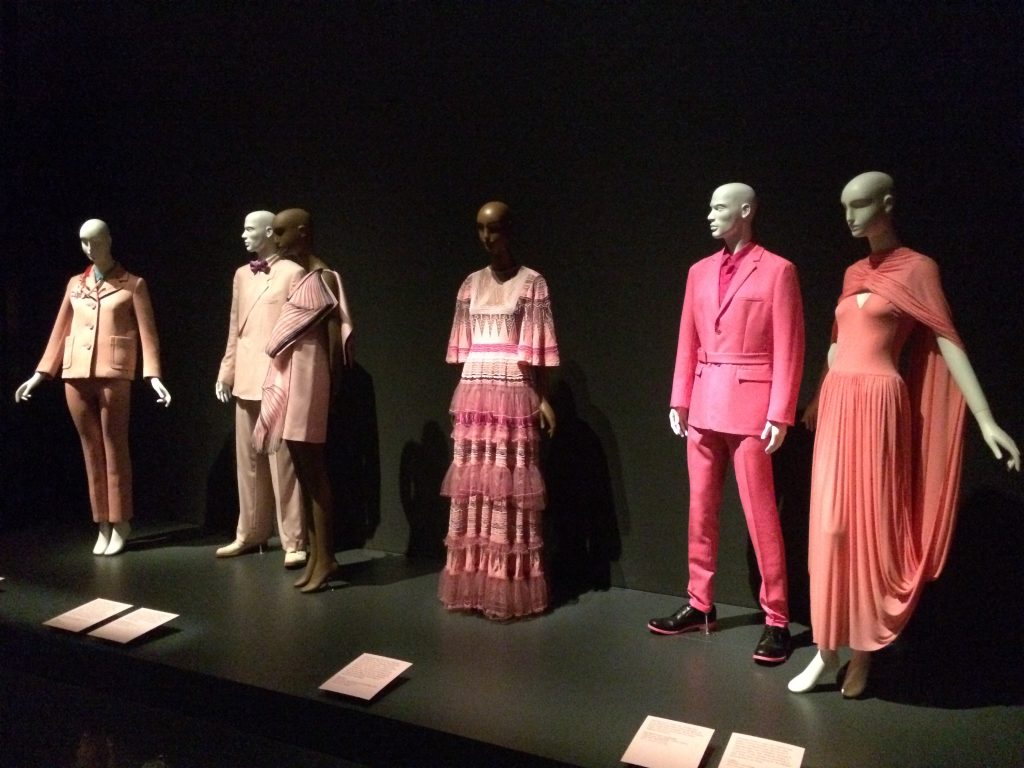 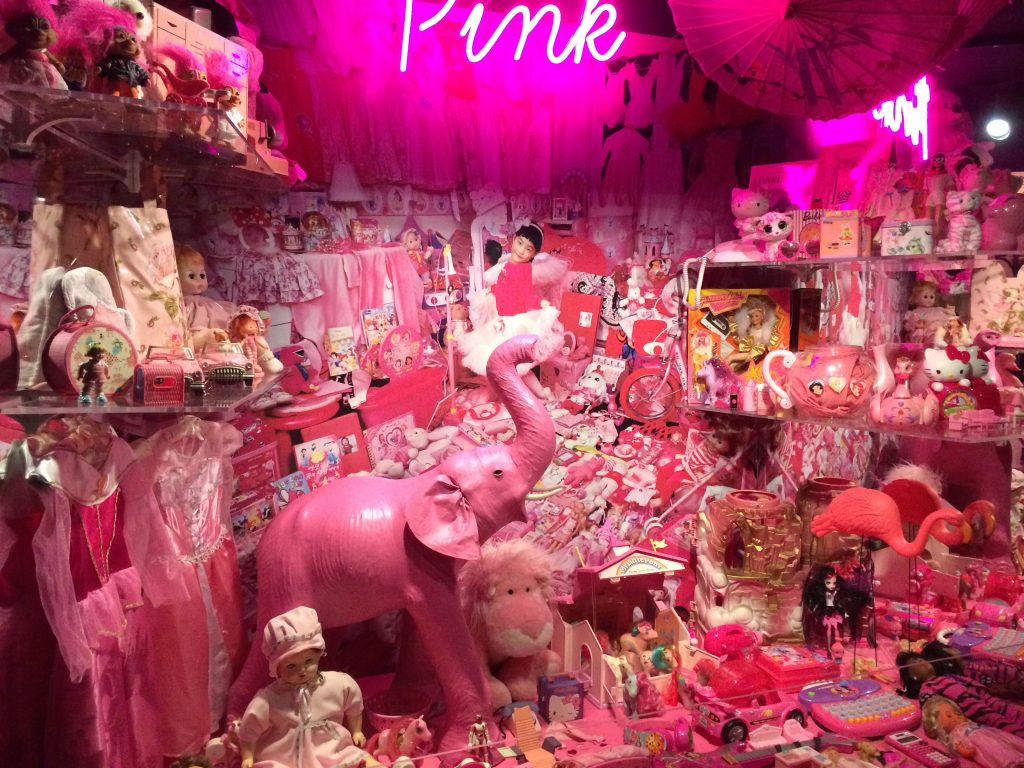 Pink: The History of a Punk, Pretty, Powerful Color was organized by the museum’s director and chief curator, Dr. Valerie Steele. Pink featured approximately 80 ensembles from the 18th century to the present, with examples by designers and brands such as Elsa Schiaparelli, Christian Dior, Yves Saint Laurent, Alessandro Michele of Gucci, Jeremy Scott of Moschino, and Rei Kawakubo of Comme des Garçons. The exhibition was accompanied by a book published by Thames & Hudson and a free symposium on October 19, 2018, that was live streamed.

Pink provokes exceptionally strong feelings of both attraction and repulsion. Indeed, it has been called the most divisive of colors. “Please, sisters, back away from the pink,” urged journalist Petula Dvorak in The Washington Post when she learned that tens of thousands of protesters were planning to wear pink pussy hats at the Women’s March of 2017. The issues facing women are “serious,” she added, and “cute” pink hats risked trivializing these issues. Yet attitudes towards pink are changing, and the color is increasingly regarded as cool and androgynous.

Although pink is popularly associated with little girls, ballerinas, and all things feminine, the stereotype of pink for girls and blue for boys only really gained traction in the United States in the mid-20th century, and the symbolism of pink has varied greatly across world history. By placing men’s, women’s, and children’s pink clothing from both Western and non-Western cultures — including India, Africa, Mexico, and Japan — in a historical context, Pink: The History of a Punk, Pretty, Powerful Color corrected popular misconceptions, encouraged viewers to question clichés and received opinion, and demonstrated that “It is society that ‘makes’ color, defines it, gives it meaning” — to quote the great color historian Michel Pastoureau.

The exhibition was divided into two sections. The introductory gallery focused primarily on the theme “Pretty in Pink” with approximately 35 examples of traditionally “feminine” pink clothes organized chronologically from the mid-19th century through the 20th century. It began with juxtaposing an 1857 bright pink crinoline dress with a black 1860 man’s suit, illustrating the feminization of color in the 19th century.

Subsequent dresses demonstrated how different shades of pink came in and out of fashion, evoking different ideas about femininity. Around 1900, for example, pale pinks implied delicate, aristocratic femininity, while by 1912 a vibrant cherry pink indicated a more exotic image. The 1920s, famous for the Little Black Dress, actually saw a rise in popularity for a range of pinks, crowned by Schiaparelli’s aptly named Shocking Pink of the late 1930s.

The 1950s are notorious as the era of the “feminine mystique” when gender stereotyping was reinforced throughout society and the pink-for-girls, blue-for-boys gender coding took off. Naturally, there are many 1950s feminine pink dresses for girls and women, although Brooks Brothers also sold pink shirts for men. The 1960s continued to witness the popularity of many “pretty in pink” dresses, such as a 1960 cocktail dress by Yves Saint Laurent for Christian Dior. The 1970s saw a decline in pink fashion, although fluorescent pink appeared. By the 1980s, pink was back in fashion, although often, as with a 1980 hot pink “power suit” by Claude Montana, it also served to acknowledge women’s growing social authority.

In addition to the clothing and accessories that were on display, there was a fascinating diorama of pink toys and dress-up clothes for girls, dating from the 1950s to the present, including dolls, “princess” costumes, My Little Pony, and other highly gendered commodities.

In contrast to the chronological layout of the introductory gallery, the main gallery was organized thematically to highlight key concepts in the history of pink. The first section, “Pompadour Pink,” featured several 18th-century ensembles, including a woman’s pink robe à la française, a man’s pink habit à la française, and a man’s pink banyan. These objects showed how pink was a new and highly fashionable unisex color in 18th-century Europe — in contrast to the 19th and 20th centuries when pink was coded as a “feminine” color. In the 18th century, pink was also important in painting and interior design.

Nearby, on the left side of the gallery, there was a small section on the pink-versus-blue gender coding in children’s wear, a binary that was still in flux in the late 1920s, when opinion was divided as to whether pink was for boys or for girls. The final decision seems to have been influenced by publicity surrounding a millionaire’s purchase of the paintings Blue Boy and Pinkie.

The exhibition placed pink in a global context, exploring how the color has been used in non-Western cultures. In India, for example, pink has long been worn by both men and women, while in Mexico the color Rosa Mexicano is associated with national identity. Western designers have drawn on these associations; as Diana Vreeland once said, “Pink is the navy blue of India.” Schiaparelli’s Shocking Pink was explicitly associated, in her mind, with Asia and Latin America.

Pink has played a notable role in both political protests and popular music associated with rebellious youth. The transgressive role of pink is emphasized across several platforms featuring both men’s and women’s clothes, ranging from vernacular garments to avant-garde high fashion. Featured items included pink pussy hats, and looks associated with music genres ranging from punk to hip-hop.

The second gallery expanded audience perspectives on pink and showed how contemporary designers are increasingly challenging traditional ideas about sweet, pink femininity. Rei Kawakubo, the radical designer behind Comme des Garçons, has been especially influential with collections ranging from “Biker/Ballerina” to “18th-Century Punk.” Even the house of Valentino has produced T-shirts asserting that “Pink Is Punk.”

In conjunction with the exhibition Pink: The History of a Punk, Pretty, Powerful Color, The Museum at FIT held a symposium on October 19, 2018. Learn more.