Pop Art Fabrics and Fashion | from Warhol to Westwood 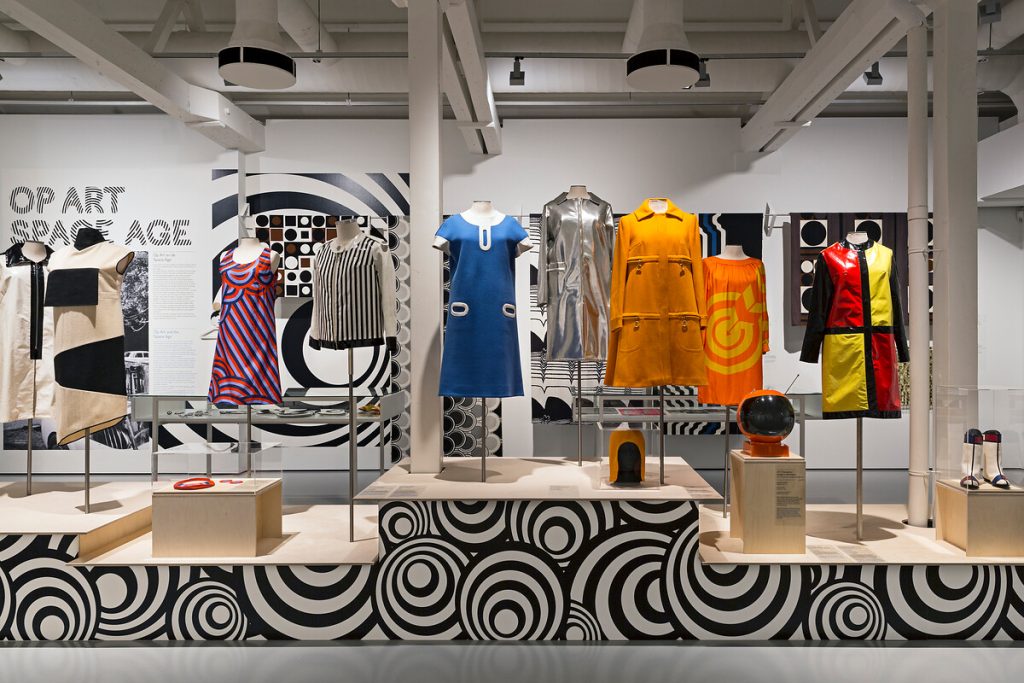 In the 1950s, a wave of rock ‘n’ roll and youth culture from America swept the world. The mix of popular images and music with art and fashion changed the way people dressed and behaved. Inspired by Pop Art, many young designers developed exciting new patterns for textiles and wallpaper. Even renowned Pop artists such as Andy Warhol and internationally acclaimed fashion designers including Mary Quant, Pierre Cardin and Vivienne Westwood designed spectacular pop textiles for fashion and furnishings. From designs featuring rock stars and soup cans to psychedelic patterns and punk outfits from the 1960s and 1970s, they found an eager following especially among the adventurous younger generation.

Pop culture
After World War II, pop culture flourished among young people in North America and Europe. Born outside the established order, Pop manifested itself as a vibrant explosion of rock ‘n’ roll music, fashion and art. The culture was characterised by a multitude of layered imagery and symbolism. This imagery abounded in everyday life, from adverts, packaging and billboards to cartoons, comics, film and music. It was the first time that teenagers were identifiable as a distinct group. They broke free of taboos and dared to show their vulnerability. By doing so, they rejected the traditional norms and values of adults. They distinguished themselves with a new style of clothing and home furnishings, which bore no resemblance to that of their parents.

Pop designers
Many young, talented fashion and textile designers of the 1960s were inspired by the Pop Art aesthetic and developed original designs. Even Pop artists with the status of Andy Warhol earned a living designing textiles. Some of these designs from post-war New York have recently been rediscovered. They are exhibited here for the first time. Also shown are fabrics by Nicky Zann, the New Yorker best known for his comic books. His striking textile designs share a strong similarity with the work of Roy Lichtenstein. Lichtenstein, in turn, used the comics and cartoons of this acclaimed graphic designer as the main inspiration for his art. From rock ‘n’ roll to the punk of the mid-1970s, the symbiotic relationship between pop textiles, pop fashion and Pop Art is unmistakable.

Op Art and Space Age
There is, however, more to the 1960s than Pop Art-inspired textiles and fashion. Around 1965, British designer Mary Quant and the French couturiers Pierre Cardin, André Courrèges and Paco Rabanne caused a sensation with their geometric designs and use of plastic as a new material. The movements to which their work belongs, Op Art and Space Age, fall under the generic term pop. The work of these designers is also included in the exhibition.

Punk and New Wave
In the 1970s, Vivienne Westwood launched her career in London. Her trail-blazing punk designs and radical new use of fabrics turned the fashion world on its head. The design of pop textiles reached its peak in this decade, but its demise was already imminent. As the pop era progressed, young people began dressing differently. Their new style better suited the laid-back, anti-authoritarian and egalitarian way they lived their lives. The icons of this style were the T-shirt and jeans. These provided endless opportunities for self-expression. The exhibition features some stunning T-shirts, with pictures of David Bowie and rock and punk singer Iggy Pop, from the punk period of the British sculptor John Dove and his wife, textile designer Molly White. Their work from the 1970s elevated T-shirt design to modern art.

Pop art in the TextielMuseum
This summer, the TextielMuseum will be dedicated to Pop Art. The exhibition will be accompanied by a host of Pop Art-related activities. Families with children can interact with the exhibition or discover the ProefLab together. For adults and professionals, there is an extensive programme of tours, workshops and masterclasses.