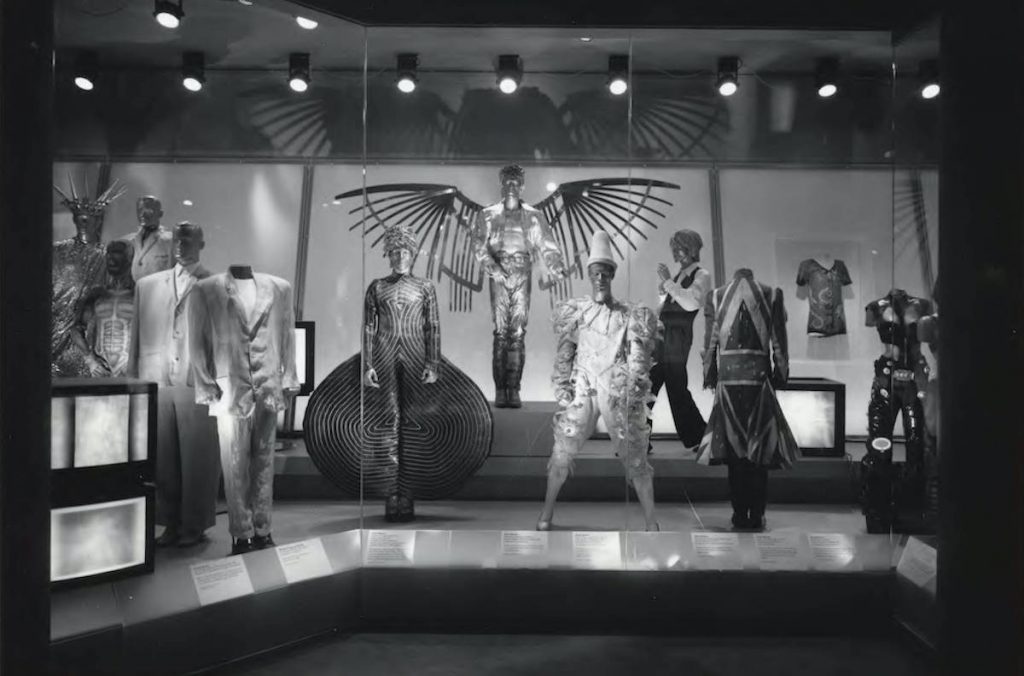 The Costume Institute of The Metropolitan Museum of Art and the Rock and Roll Hall of Fame and Museum in Cleveland spotlight classic rock-‘n’-roll performers and their pervasive influence on style in the exhibition titled Rock Style, on view at the Metropolitan Museum from December 9, 1999, through March 19, 2000. A selection of more than 40 major rock artists who have influenced style from the 1950s to the present are represented by fashions from the collections of The Costume Institute and the Rock and Roll Hall of Fame and Museum, as well as by loans from the private collections of several of the rock stars themselves. Artists represented include Elvis Presley, the Beatles, Aretha Franklin, Janis Joplin, Jimi Hendrix, David Bowie, Tina Turner, Elton John, Mama Cass, Stevie Nicks, Bruce Springsteen, Bono, David Byrne, Grace Jones, Madonna, and Björk.

This year’s Costume Institute Benefit — the annual black-tie dinner and dance known as the “Party of the Year” — takes place on December 6, launching the exhibition with a celebration of rock-‘n’-roll music and style.

The exhibition and the benefit for The Costume Institute are made possible by Tommy Hilfiger U.S.A., Inc.

Additional support has been provided by Condé Nast and The Estée Lauder Companies Inc.

The exhibition has been organized by The Metropolitan Museum of Art, New York, and the Rock and Roll Hall of Fame and Museum, Cleveland, where it will be on view from May 12 through September 10, 2000. A third venue for the exhibition — the Barbican Centre in London — will follow, from October 4 through December 10, 2000.

More about the exhibition
Philippe de Montebello, Director of The Metropolitan Museum of Art, commented: “The Metropolitan Museum’s collections and exhibitions — representing the sheer breadth of the past 5,000 years of world art — embrace the study and presentation of fashion history through The Costume Institute. This December’s exhibition takes on one of the most recent — but, without doubt, also one of the most powerful — influences on 20th-century culture and style, demonstrating once again that fashion remains a living art and that The Costume Institute continues to honor both the best of our history and the most expressive of contemporary culture. Sadly, we open this exhibition without the person who initiated it, Richard Martin, who for six years led the Costume Institute with his extraordinary intelligence, unfailing eye, and mesmerizing style. Rock Style is dedicated to his memory.”

“Rock ‘n’ roll and the artists behind the music have had a significant impact on fashion and style throughout Rock history,” said Tommy Hilfiger. “Their innovative, and at times, daring clothing, has broken ground in style, evolved fashion trends, and made them image icons recognized around the world. These past and present icons, with their genius in music and creativity in fashion, have always inspired me. I am very honored to be part of this unique and exciting exhibition and to be co-chairing the ‘Party of the Year’ with Anna Wintour and Aerin Lauder. I hope that together we can make this year’s gala one of the most successful and memorable to date.”

“From hairstyles to mannerisms to clothing, the style and fashions of rock and roll artists have often been the cutting edge off which popular fashion and culture have grown,” said Rock and Roll Hall of Fame and Museum Chief Executive Officer and Executive Director Terry Stewart. “We believe that this unique exhibition will provide tangible contexts in which to explore that relationship. We are thrilled to work with the Metropolitan Museum to bring this profound contribution to 20th-century culture to our respective venues.”

Rock Style was originally conceived by Richard Martin with James D. Henke, Vice President of Exhibitions and Curatorial Affairs, and Ileen Gallagher, consultant, Rock and Roll Hall of Fame and Museum. It has been realized in New York by Myra Walker, Associate Curator, The Costume Institute, with additional help from Craig Inciardi, Associate Curator, Rock and Roll Hall of Fame and Museum. At the time the exhibition was announced, Richard Martin commented: “It would be difficult to overestimate the influence of rock on late-20th-century style. More than movies and/or the fashion industry, rock has been a dynamic force in visual style. Every generation of rock history has commanded visual image as much as sound.” He continued, “Twenty-five years ago, in 1974, The Costume Institute presented the exhibition Hollywood Design. That memorable exhibition, often described as the most popular in The Costume Institute’s history, testified to the great influence of popular film on fashion and fashion’s role in film. We would be remiss to end the century with that witness alone, for today rock has supplanted film to become the great interlocutor with fashion in the vivid visual contest of contemporary living.”

The exhibition organized in five sections
The exhibition at the Metropolitan Museum is organized in five sections that address the synergy between rock music and fashion. Poets and Dreamers captures the spirit of the individuals who mixed and matched their way into their own unique interpretation of style. This section addresses the power and simplicity of the flannel shirt and black jeans, which took on new meaning when donned by Bruce Springsteen and others — demonstrating that the songwriter/poet could be a dynamic rocker onstage and also appeal to the working class. The democratic fabric of denim was co-opted from rockers of the 1950s and brought into the 1960s with a new twist. Janis Joplin created her own look from vintage clothes found in thrift stores — her image as a rebellious woman was a large part of her appeal. The sixties embraced the dreamers of the world and allowed them to create an amalgamation of style that often merged their musical sensibilities with a political stance. Some of the performers represented in this section are Jimi Hendrix, Janis Joplin, Donovan, Mama Cass, John Sebastian, Marvin Gaye, Prince, Tori Amos, and Lenny Kravitz.

A section on Icons features Elvis Presley and the Beatles, a tribute to the founders of rock and roll who merged music from gospel, country, and the blues. These artists modeled themselves after one another, and on the raw power of black singers and musicians. Highlights in this section are the gold lamé suit worn by Elvis in 1957, and the jackets in vivid pink, yellow-green, blue, and red satin that were worn by the Beatles on the cover of their 1967 album Sgt. Pepper’s Lonely Hearts Club Band and that are reunited for this exhibition.

Superstars defined by their ability to hold a crowd in their sway appear in the third gallery, Brilliant Disguise. Superstars have had a definitive impact on the creation of fashion fads and trends. David Bowie’s character of Ziggy Stardust, along with the Spiders from Mars, unleashed a fashion genie that never retreated. By the early seventies, it was not enough to go onstage and just play music. Sound, lights, choreography, and later, video became key elements of the concert experience. A performer’s dress, designed as an integral part of a concert experience, can mesmerize an audience, as evidenced by examples in the exhibition worn by Mick Jagger, Bono, Michael Jackson, Grace Jones, Björk, TLC, and Janet Jackson. The stage persona that is created can become so dominant that the performer may even be reluctant to be seen out of character or without makeup.

Rebels in rock music — the subject of the fourth gallery of Rock Style — have now become almost mainstream. The black leather jacket is viewed as the seminal item of clothing that has spawned the most loyalty as a universal symbol in rock and roll fashion. Even punks, Goths, and heavy metal fans are slaves to fashion, albeit anti-fashion — they use dress to create a bond with one another and to induce a level of tension between themselves and the public. This section encompasses clothing ranging from a shirt of black leather and snakeskin worn by Lou Reed, Alice Cooper’s leopard-skin boots, and other outfits worn by Rod Stewart, Courtney Love, Sid Vicious, and Steven Tyler.

The final section of the exhibition, High Style, demonstrates how the media and popular culture convene to sell images to an insatiable fashion public. During the early eighties, for instance, Elton John and Cher linked up with designer Bob Mackie to embellish their stage presence. Madonna and others eventually flocked to haute couture designers such as Jean-Paul Gaultier, Gianni Versace, Thierry Mugler, and Giorgio Armani to cement their places in fashion history. These alliances between celebrity designers and rock stars have created a powerful force in the fashion industry. Clothing worn by Aretha Franklin, Tina Turner, Whitney Houston, Diana Ross, the Supremes, Ray Charles, Lauryn Hill, James Brown, and Sean “Puffy” Combs further illustrate this point.

Videos and the soundtrack created for and integrated into the exhibition were provided by Dreamchaser Productions. Christopher Noey, Associate Museum Educator, coordinated the video and audio programming at the Metropolitan Museum, in collaboration with Scharf Weissberg. Pucci International created the mannequins.

Installation design at the Metropolitan was overseen by Jeffrey L. Daly, Chief Designer, with the assistance of Dennis Kois, Design Assistant to the Chief Designer.