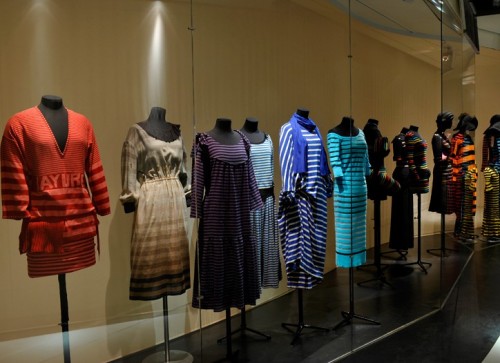 As early as 1962, Sonia Rykiel designed and had her first mother-to-be dresses and fitted knitwear made, showing feminine curves, for the Laura boutique and was very successful. But it was in 1968 that the history of Sonia Rykiel began with the opening of the first boutique in Saint-Germain des Prés in Paris. Sonia Rykiel quickly becomes the must-have queen of knits by creating mini-sweaters and turning their proportions upside down. Knitwear then becomes her favorite material that she will work with obsession throughout her career. In 1974, she invented the first clothes with reverse seams and introduced the unfinished: the hems and linings were erased and abolished,

While at this time a fashionable silhouette becomes the carbon paper of each decade, outmoding the previous one, the Rykiel allure is the stable negative of modernity. Sonia Rykiel’s creations leave few possibilities for avid historians to date the work of a creator to the year.

Its fashion, which imposes itself with instantaneity and timelessness, resists time well.

Sonia Rykiel was also a pioneer when she used black in the late pop years. Color synonymous for her with seduction and freedom, it shakes up the bourgeois elegance of the 70s, and overturns taboos. From salons to catwalks, black signifies the modernity of the house, long before Japanese and then Belgian designers took hold of it.

Woman of fashion, Sonia Rykiel plays with words that become inscriptions on clothes, poetic slogans or books. It is an exceptional signature that fascinates fashion and image designers, artists and filmmakers.

The exhibition immerses the visitor in the mysterious and bewitching universe dear to Sonia Rykiel, the clothes playing hide and seek with the videos of the parades and with many photographs. The space is reminiscent of a Haussmanian apartment, which you discover as you go from one room to another. A rotunda, doors, boudoirs and alcoves follow one another in a cozy atmosphere underlined by a flesh-colored veil revealing the glamorous and sensual side that the seamstress loves. In a thematic route, the exhibition reveals each of the strong themes specific to Sonia Rykiel, significant of a tamed and Parisian style where the generational transmission embodied with talent now by Nathalie Rykiel dominates naturally. A series of portraits of Sarah Moon are presented at the opening, followed by a retrospective of sweaters invented by the designer. The black, the reverse, the revolutionary stripes but also materials such as sponge, which Rykiel knows how to make the most elegant joggers, the laces and furs that tattoo the body with subtle accents, straight from the 1930s, constitute the themes shown in the rooms of the museum.

The trousers more elegant than the long evening skirts, the frills, the stitched flowers in muslin or in relief evoke the fixed and poetic vocabulary of the designer. Sonia Rykiel’s collaboration with Dominique Issermann is also presented with all the work that brings together the designer and the photographer, Sonia Rykiel being the first to have entrusted her with her advertising campaigns from 1979 to 1990. Some masterpieces, from Decorative Arts fashion collections, punctuate and finally come to mirror the innovative work of the house Rykiel, participating in revealing short stories of the mesh through the centuries or restoring instead of writing on clothing from the XVIII th century.

The charismatic and iconic character of Sonia Rykiel is evoked through unpublished documents, such as the long interview, in 1981, of Sonia Rykiel carried out by Andy Warhol himself for his initiated program “  Warhol’s TV  ”.

”  Sonia Rykiel, Exhibition  ” ends with a wonderful tribute, unprecedented in the field of fashion and creation, which was unveiled at the anniversary parade of the house, on 1 st  October 2008.