Spectres: When Fashion Turns Back 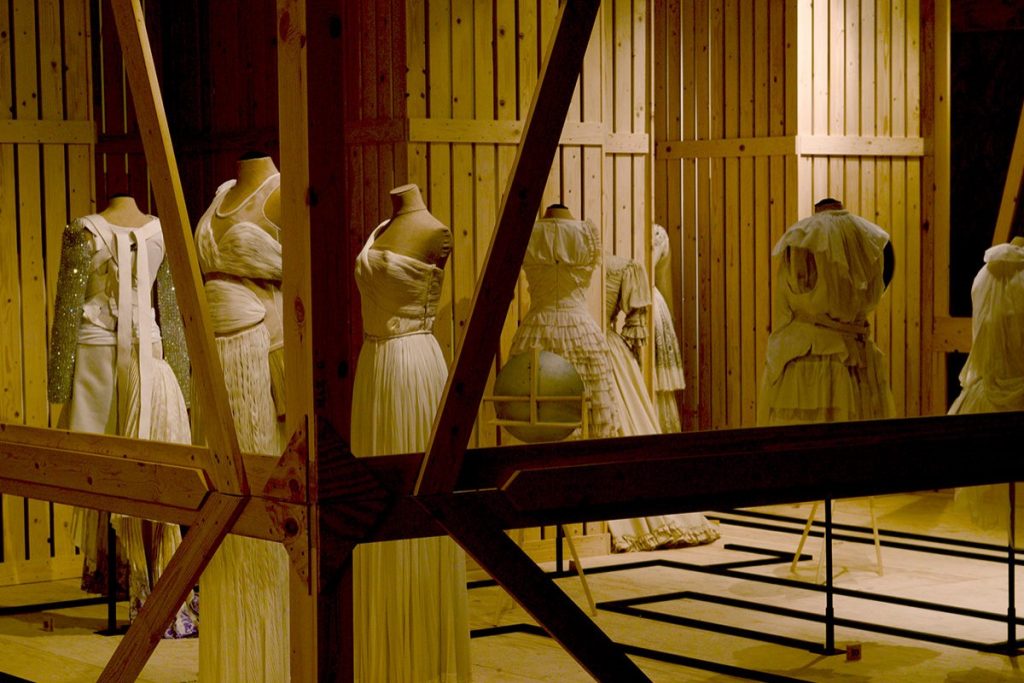 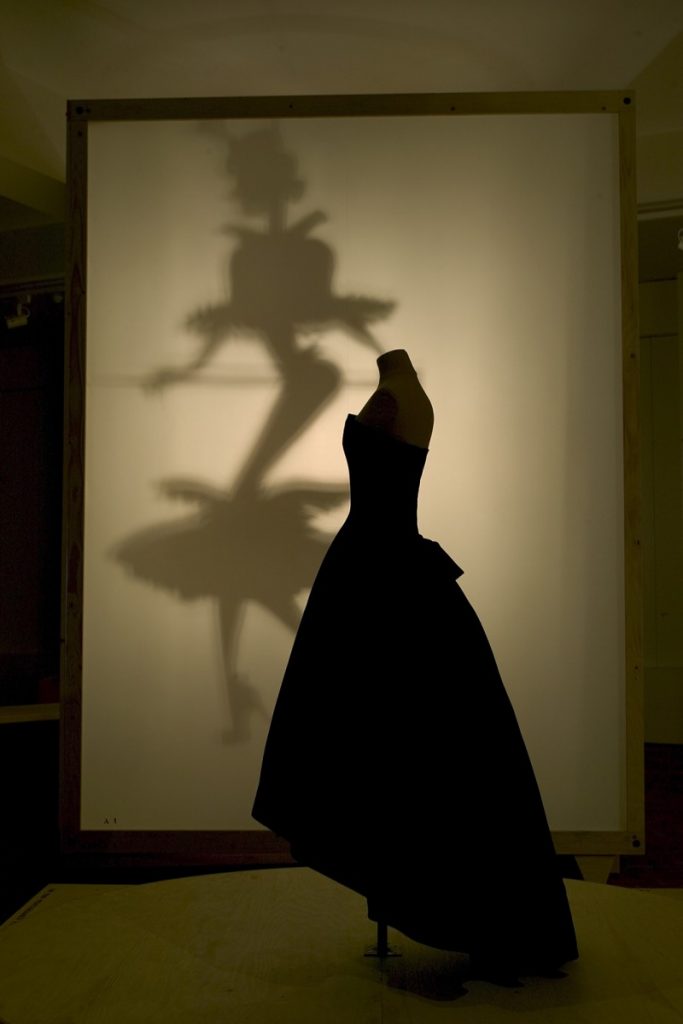 Spectres set out to reveal the shadows and experiences that formed a ‘fashion memory’ in contemporary dress. In showing the hidden, yet haunting, connections between recent fashion and its past, it used pieces drawn from avant-garde designers, from the V&A fashion collection and from the archive at ModeMuseum in Antwerp.

Set up as a series of seven fairground attractions, Spectres invited the visitors into a labyrinth of associations: a shadow lantern throws silhouettes, enlarged maquettes look like games for grown-ups, rotating cogs make and break patterns.

Reappearances: getting things back

‘…as the labyrinth doubles back on itself what is most modern is revealed as also having a relation to what is most old. Thus distant points in time can become proximate at specific moments as their paths run close to each other.’ (Caroline Evans, Fashion at the Edge: 9)

This first section looks at patterns in historical dress, where motifs return and time folds back on itself to form a labyrinthine pattern. To experience the haunting of contemporary fashion by its past, the viewer looks through optical devices that pick out details of the dress. Distorted elements are brought into the present, context is discarded.

Seven views are set up: magnifying, reflecting, selecting, doubling the objects through the peepholes. They remind us of looking games, with each game suggesting different ways a designer might edit the past to create new designs.

‘We claim that the nostalgic man, in his attachment to the past, searches for his lost childhood from where he is henceforth exiled.

Yes, no question. But I think that his homesickness has another source. It’s not the past that he idealizes; it isn’t the present on which he turns his back but on what is dying.

His wish: that anywhere – whether he changes continents, cities, jobs, loves – he could find his native land, the one where life is born, is reborn. Nostalgia carries the desire, less for an unchanging eternity than for always fresh beginnings. Thus time that passes and destroys tries to take away the ideal figure of a place that remains. The homeland is one of the metaphors of life.’ (J.B. Pontalis, Fenêtres: 100)

Here fleeting moments in fashion are idealised into monuments. Giant wooden figures, taken from Ruben Toledo’s drawing The Avenue of Silhouettes, loom above the visitor.

The exhibition questions whether nostalgia is hoping for a forgotten past, or longing for impossible futures. Are the silhouettes those of historical dresses, or of designs for future dresses? Giant iron locks and keys promise routes behind these doors into other ideas.

Locking in and out

The past is brought into the foreground through quotation of its motifs, silhouettes, decoration. Where past and present pieces meet or interlock, there is an uncanny recognition. When they diverge, they are again remote.

Six themes are acted out on three huge cogs, moving incessantly like the fashion system itself. Fashion is promiscuous in its references, never resting on one idea. It can’t afford to get stuck or be predictable. The question is, how does fashion keep unlocking itself?

The section nods to Anna Piaggi’s Doppie Pagine (double page spread), in which she names trends for Italian Vogue each month. She finds the clues that link disparate dresses on the catwalk. Here they are: Victoriana, Tartan, Bohemia, Designs for Dresses, Flags, and Futuristic.

The worn out, the torn apart, or burned and stained are the material for the new distress – distress here meaning both the signs of trauma and the evidence of wear and tear. In re-creating these effects, a disturbing past is referred to. Something ruined is being recovered. We find a use for the things we had discarded and are intrigued by what is beautiful about them. Contemporary dress takes its inspiration from ageing of the fabric itself, a different kind of history.

An un-conserved wedding dress is laid out like a giant doll on a hospital operating table. Naomi Filmer turns broken limbs into precious objects of desire.

Remixing it: the past in pieces

‘And in the same way that musical history lost its linearity when mixed by the DJ…so too did fashion and cultural history lose its linearity when ‘remixed’ by late twentieth-century designers folding one historical reference back on another. Rather than recreating one period, [the] historical borrowings were multi-layered…rummaging through the historical wardrobe to produce clothes with a strictly modern resonance.’ (Caroline Evans, Fashion at the Edge: 25)

Fashion is can be shamelessly irreverent in its use of the past. Contemporary styling often combines the old and the new, the formal and the inappropriate, the trivial and the elegant. Old themes are worn as new details. Ruben Toledo’s painted sections allude to a children’s game of parts, as though the visitor were free to change the combinations. Many of the pieces in the display were found in Portobello Road, London’s famous secondhand market used by stylists.

Phantasmagoria: the amazing lost and found

‘The term ‘phantasmagoria’ was first used in 1802 to describe another form of popular spectacle… a magic lantern show in which skeletons, ghosts and other fantastical figures were made to rapidly increase and decrease in size… metaphorically it came to connote some form of dramatic visual deception or display, in which shadowy and unreal figures appear…’ (Caroline Evans, Fashion at the Edge: 89)

The circus fairground and magic are the basis for this installation – a disused merry-go-round, a marionette theatre and a revolving shadow show. The tricks of the circus, the typecasting of the harlequin and the shape-shifting of the shadow all distract us from history, masking its details.

‘Curiouser and curiouser!’ cried Alice (she was so much surprised, that for the moment she quite forgot how to speak good English); ‘now I’m opening out like the largest telescope that ever was!’ (Lewis Carroll: Alice’s Adventures in Wonderland: chapter 2)

Age is here associated with scale. The child’s and woman’s dress are like scaled-up dolls’ clothes, speaking of the anxiety of ageing. A giant curiosity cabinet houses a collection of historic games. Childhood is throughout the exhibition a motif for the past, our own past. This section also refers to the past of the museum itself – a curiosity cabinet.

Collaboration has always been an essential part of fashion curation for Judith Clark and this is particularly apparent for the exhibition Spectres where the enormous influence of fashion theorist Caroline Evans; fashion illustrator Ruben Toledo and jeweller Naomi Fulmer are in evidence.

Judith Clark trained in Architecture at the Bartlett School of Architecture and at the Architectural Association, London. Her shift towards fashion curation began as she realised the parallels between the design and dressing of spaces with that of dressing the human form.

Caroline Evans is Reader in Fashion History and Theory at Central Saint Martins, London. She teaches and writes on 20th century and current fashion.

Ruben Toledo Ruben Toledo paints, sculpts, illustrates and draws. His work has been exhibited in museums such as the Metropolitan Museum of Art, the textile museum at the Louvre and the museum at the Fashion Institute of Technology.

Written to accompany the exhibition Spectres: When Fashion Turns Back, on display at the V&A South Kensington between 24 February and 8 May 2005.