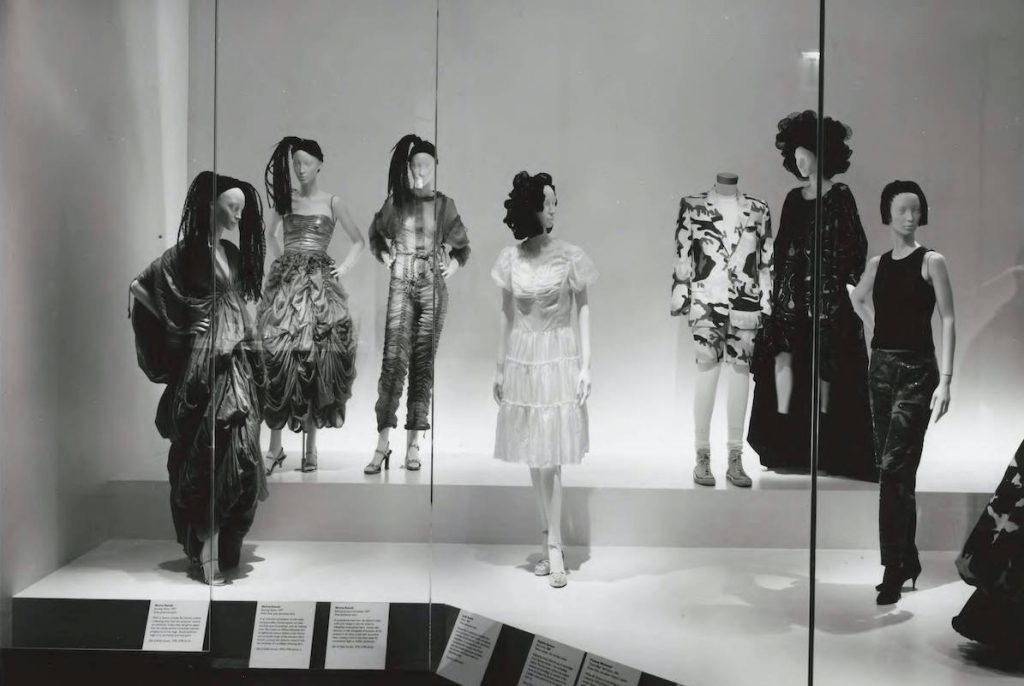 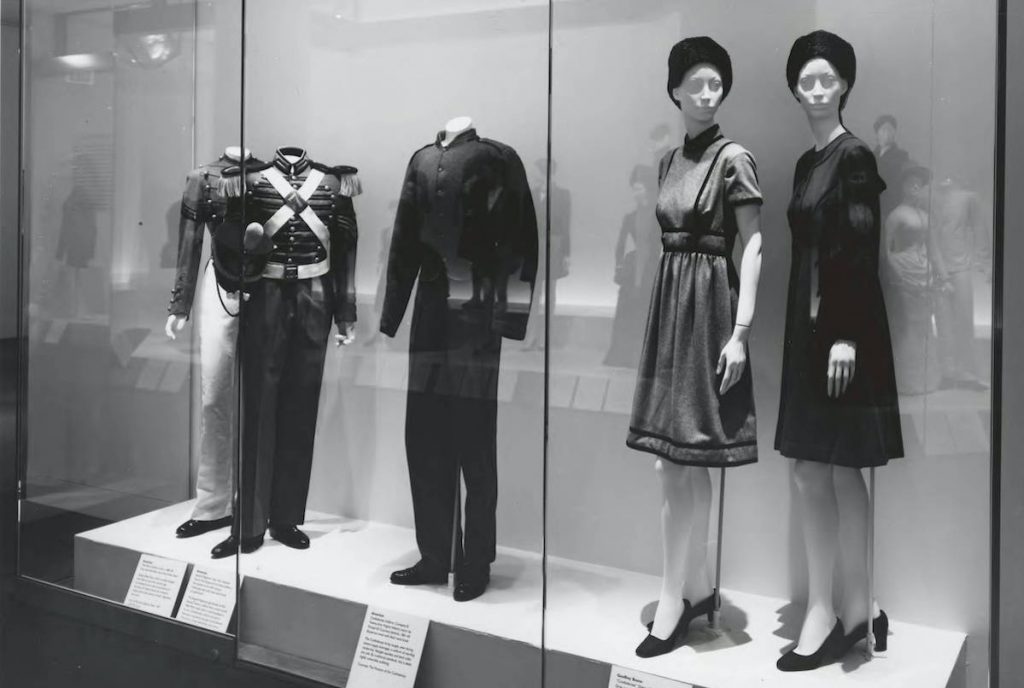 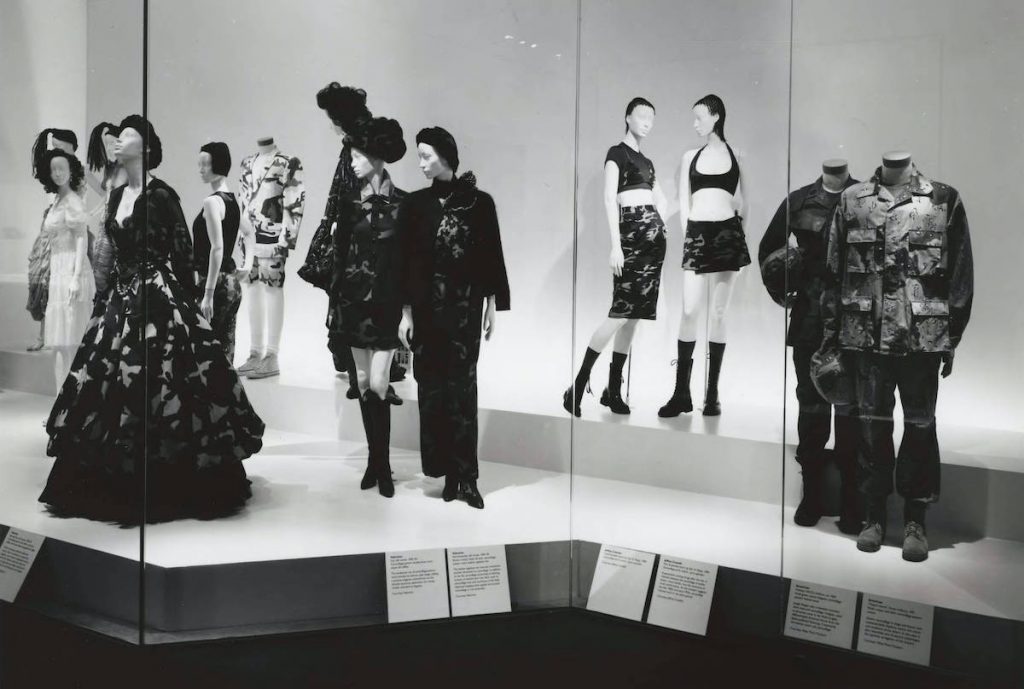 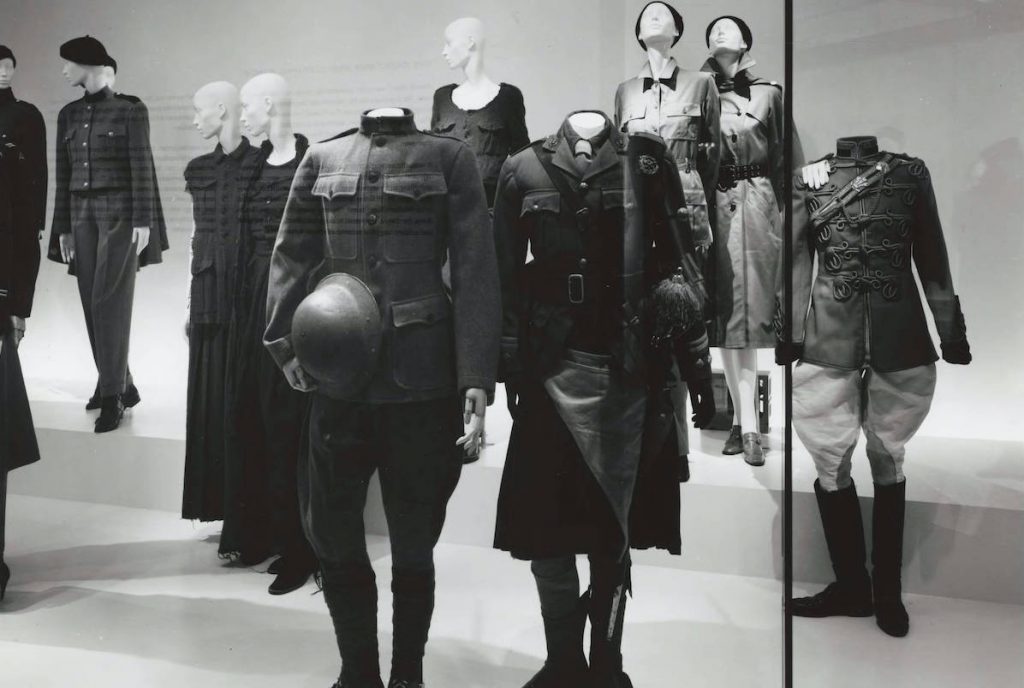 Swords into Ploughshares: Military Dress and the Civilian Wardrobe, opening September 7 in The Metropolitan Museum of Art’s Costume Institute, will explore the extraordinary, pervasive, and longtime influence of the military on civilian dress for both men and women. More than 100 costumes drawn primarily from the extensive collection of The Costume Institute will demonstrate contemporary fashion’s expropriations from three centuries of military clothing around the world. As the exhibition will reveal, principal elements of modern dress have long been inspired by military attire, which often serves as a testing ground for apparel. Trenchcoats, pea jackets, aviator glasses, camouflage, sailor caps, braid, epaulets, olive drab, armor and mail, regimental tartans, khaki, and the heroic adornments of the military have all become fundamental elements of the modem wardrobe.

The exhibition ranges from the 18th century to the present, and covers diverse areas of the world. In the costumes featured, the valiant dress of Samurai warriors, military officers, Highland regiments, and the Zouave military will be invoked as a stimulus to modem dress. A legion of concepts from all branches of the military, tested by the quartermaster and proven in utility, have become standard items of modem dress for both sexes.

“We have recruited so much of the modem wardrobe from the military in tailored valor, the pragmatism of warfare, and the memory of victory that it is hard to imagine modem dress without the presence of military adaptations,” comments Curator Richard Martin. “So often, clothing represents our dreams and longings. Military dress is paradoxically both the embodiment of heroes–in Eisenhower jacket or Napoleonic tailoring–and the combat-ready usefulness of clothing, a merger of the real and epic. War yields a perverse effect in becoming a socialized and beautiful ideal for dress.”

The exhibition reveals apparel as one of the lasting disciplines of war. Diana Vreeland has said, “Uniforms are the sportswear of the 19th century.” The merging of the uniform’s impeccable tailoring, its implicit accommodation of aggressive movements, and its hierarchical pomp make service dress an inevitable source of contemporary apparel.

Swords into Ploughshares is a lesson in adaptability and re-use of culturally effective forms. The exhibition also demonstrates the transfer of clothing first determined for men into a sartorial vocabulary equally suitable for men and women. The ceremonial components of formal military dress — insignias, epaulets, stripings, braid and badges — are reinterpreted in modem dress as rich detailing derived directly from military regalia. While these elements of dress are tempered in war, they are extremely stylish in daily life.

There will be two lectures scheduled in conjunction with the exhibition, and the exhibition will be accompanied by an illustrated catalogue written by Richard Martin and Harold Koda.