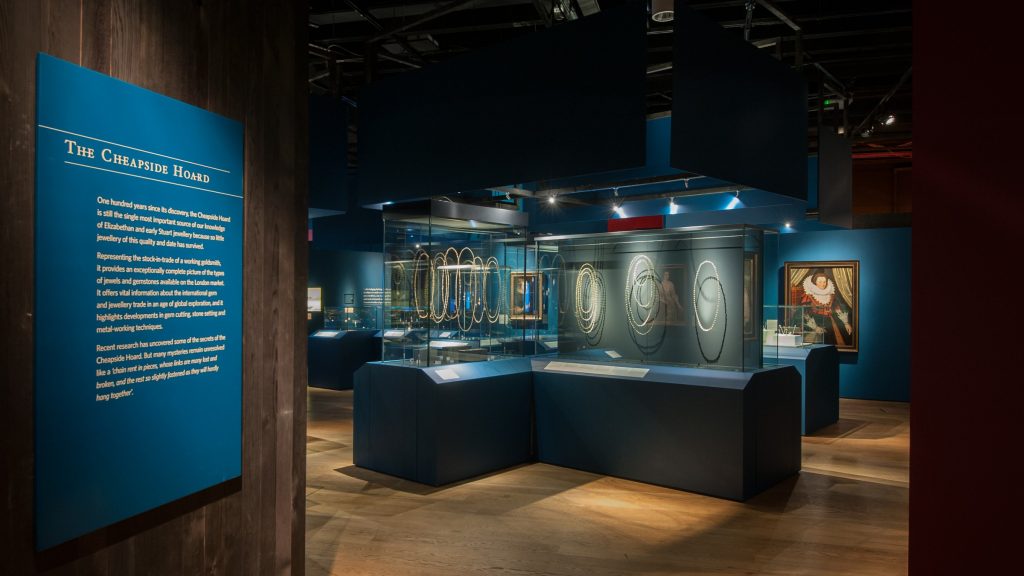 For almost 300 years a buried treasure lay undisturbed below one of London’s busiest streets. No one knew it was there until workmen started to demolish a timber-framed building in Cheapside near St Paul’s Cathedral, in June 1912. The property had stood on the site since the 17th century, but the cellars were older and lined with brick.

On 18 June 1912 workmen started to excavate the cellars with their picks, and while they were breaking up the floor, they noticed something glinting in the soil below. Quickly scraping the chalky soil aside, they realized that they had struck the remains of an old wooden casket, and to their immense delight a tangled heap of jewellery, gems and other precious objects came tumbling forth. They had uncovered what is now known and celebrated as The Cheapside Hoard the greatest cache of Elizabethan and early Stuart jewellery in the world and one of the most remarkable and spectacular finds ever recovered from British soil.

As a time-capsule of contemporary taste and the jewellers’ trade The Cheapside Hoard is unsurpassed, and it remains not only the most important source of our knowledge of Elizabethan and early Stuart jewellery in England because so little jewellery of this date has survived, but also provides unparalleled information on the international gem trade in an age of global conquest and exploration.

The Hoard was acquired by the London Museum in 1912 (which merged with the Guildhall Museum to form the Museum of London in 1976). There are five items in the Victoria & Albert Museum and twenty five pieces in the British Museum, and all of these pieces were brought together for the first time in 100 years for the exhibition ‘The Cheapside Hoard: London’s Lost Jewels’ (11 October 2013 – 27 April 2014). The Hoard is not currently on display in the Museum of London. A purpose-built gallery for the permanent display of the Hoard is planned for our new museum in Smithfield, which is scheduled to open in 2021.

The Hoard represents the stock-in-trade of a working goldsmith jeweller and its presence in Cheapside is highly significant, because this street was not only the principal artery of the City, its ceremonial route and main shopping street, but was also the hub of the goldsmiths’ trade. The Hoard reflects London’s role in the international gem and jewellery trade and it contains an astonishing array of almost 500 dazzling jewels and gemstones from many parts of the world. There is an agate cameo of Elizabeth I; an exquisite gold watch set in a massive emerald from Colombia; sapphires, diamonds and rubies from the India and Sri Lanka; glistening pearls, opals and turquoise and Egyptian, Byzantine and classical gems which had been in circulation for at least sixteen centuries when the Hoard was buried, probably sometime during the English Civil Wars (1642-1646).