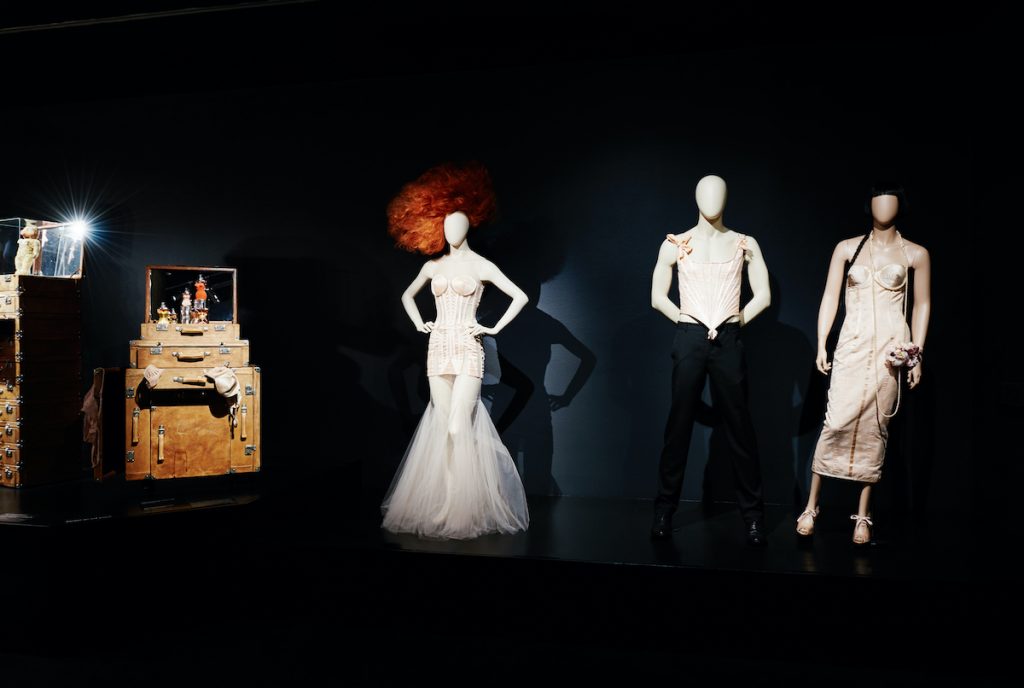 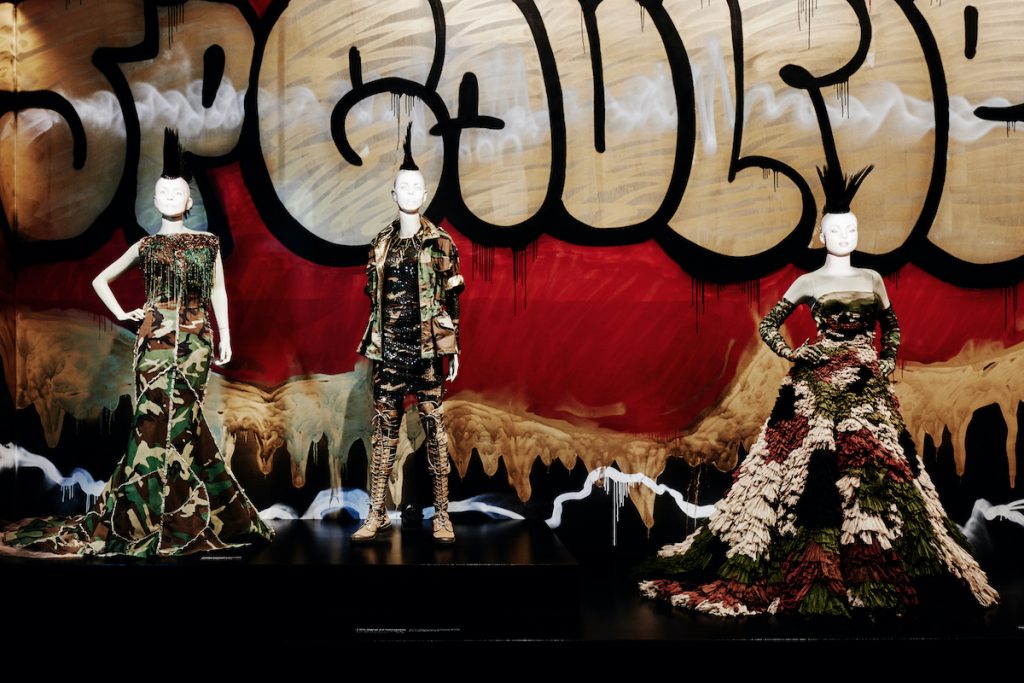 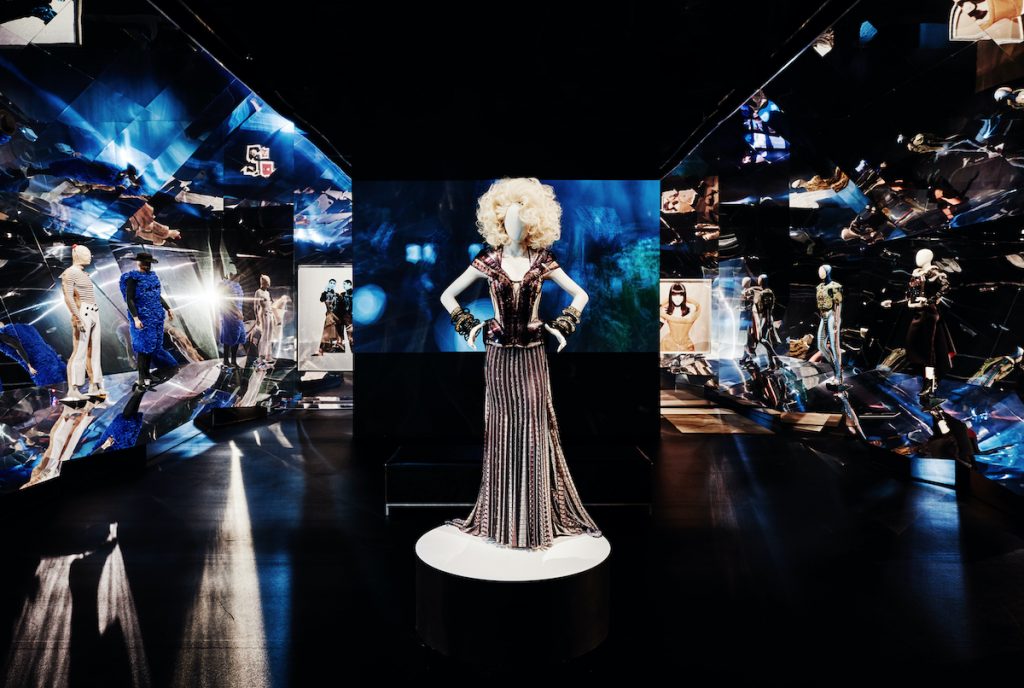 The Fashion World of Jean Paul Gaultier: From the Sidewalk to the Catwalk, National Gallery of Victoria, Melbourne, Australia, 17 Oct 2014-8 Feb 2015

“ I am honoured and flattered that my exhibition will travel to Australia and I am thrilled to be returning to a country that I have visited only once, many years ago. Preparing this exhibition I have realised how strong my ties to Australia are – Nicole Kidman was my first couture client; I have dressed Cate Blanchett on numerous occasions; Kylie is a dear friend and I have had the pleasure of working closely with her on her tours. I have also been working for many years with models Gemma Ward, Catherine McNeil, Jarrod Scott, and the list goes on. The people are what make this country great and you Australians certainly excel!”

The unconventional and playfully irreverent designs of the fashion world’s ‘enfant terrible’, Jean Paul Gaultier, will be celebrated with the first international exhibition dedicated to this ground-breaking French couturier. The National Gallery of Victoria will be the only Asia-Pacific venue for The Fashion World of Jean Paul Gaultier: From the Sidewalk to the Catwalk, which will feature over 140 superbly crafted and detailed garments spanning his creative output, from the first dress created in 1971 and the launch of his first pret-a-porter collection in 1976 to his most recent haute couture collections. The exhibition is curated by Thierry-Maxime Loriot and organised by the Montreal Museum of Fine Arts in collaboration with Maison Jean Paul Gaultier, Paris.

This spectacular overview of Gaultier’s extensive oeuvre will include exclusive material not exhibited in previous venues of the tour, such as pieces from his recent haute couture and ready-to-wear collections and stage costumes worn by Australian actresses Nicole Kidman at the Oscars and Cate Blanchett at the Golden Globes.

More than a million visitors have already flocked to see the exhibition on its worldwide tour that includes Montreal, New York and London. For the Melbourne exhibition, a section on Gaultier’s Australian muses is being specially developed and will include brilliantly executed pieces created for Kylie Minogue, Nicole Kidman, Cate Blanchett, Andrej Pejić and Gemma Ward.

Minister for the Arts Heidi Victoria MP said, “The National Gallery of Victoria is the only Australian venue and, indeed, the only venue in the region, to stage this extraordinary exhibition celebrating the creative talent of one of the world’s most influential fashion designers. The exhibition promises to be show-stopping and I look forward to welcoming it to Melbourne.”

“Jean Paul Gaultier’s radical designs break down stereotypes and clichés, questioning preconceived standards of beauty and challenging societal, gender and aesthetic ‘norms’. The results are exquisite works of art; exuberant, witty, surprising and dramatic. This is a unique chance for our visitors to experience the world of Jean Paul Gaultier; a world that extends beyond the catwalk into the realms of art, music and film.”

The exhibition is organised around seven themes tracing the influences, passions and obsessions of Jean Paul Gaultier; from the streets of Paris and London to his impact on world cinema. A major feature of the exhibition is the 32 custom mannequins utilising high-definition audio-visual projections. A dozen celebrities lent their faces and voices to realise this project, among them Gaultier himself but also muses Eve Salvail and Smashing Pumpkins/Hole bass player Melissa Auf der Maur. Many of the mannequins wear remarkable wigs and headdresses created by renowned hairstylist Odile Gilbert and her Atelier 68 team. The production and staging of this dynamic audiovisual element is the work of Denis Marleau and Stephanie Jasmin of UBU/Compagnie de creation of Montreal. Jolicoeur International of Quebec realised all the custom-made mannequins with different skin tones and positions. Accessories, sketches, stage costumes and excerpts and footage from films, runway shows, concerts and dance performances will help illustrate the intriguing story of this unrivalled fashion designer.

Nathalie Bondil, Director and Chief Curator of the Montreal Museum of Fine Arts who organized the exhibition, said, “It is a contemporary and living installation, an enchanted narrative that paints a portrait of a society, our society, by way of the obsessions of an activist for pluralist beauty. It is the manifesto of a human being who is comfortable being himself.”

The exhibition is accompanied by the first major monograph on the French designer, The Fashion World of Jean Paul Gaultier: From the Catwalk to the Sidewalk, published by the Montreal Museum of Fine Arts under the direction of Thierry-Maxime Loriot.

“As a long time fan and admirer of Jean Paul Gaultier and his work, it was a great thrill to collaborate with him for my tour costumes. A visionary, his skill at creating drama and fantasy are second to none. On top of that, his kindness and humour shine through all that he does. A dear friend and an icon of design, long may he reign! I’m honoured to be part of this amazing exhibition and know visitors will leave elated and inspired.”